A while back, I spent a whopping $5 on this 50-movie set, Sci-fi Invasion. That adds up to 10 cents per movie. War of the Robots is the most painful-to-watch one yet.

Here’s what happens: I have no idea what the hell happens! It takes place in the future (I think), where a bunch of guys with matching blonde wigs kidnap a scientist and his bosomy assistant, and then a bunch of other guys fly around in space for a while.

Speculative spectacle: Crap model spaceships, spaceship interiors that look like middle school play sets, ill-fitting jumpsuits for costumes, horrid dubbing, splotches of paint on the screen to represent explosions, fight choreography that makes William Shatner look like Donnie Yen – this movie’s budget must have been less than what I paid for it.

Sleaze factor: Everybody on board the ship seems more interested in the love triangle between the heroic captain, the buxom scientist’s assistant, and another female crewmember. Why bother with saving the universe when there’s so much juicy gossip to be had?

Hunky Guy: “Since the captain doesn’t even notice you, despite the torch you’ve been carrying for him for quite a while, why don’t you just drop him off on the satellite, and take the rest of us back home?”

Hot babe: “That’s a good idea. I’ll remember to apply it to you when you’re on a remote planet somewhere in the galaxy, far away where nobody can find you.”

What the felgercarb? Nothing makes sense. Who’s the bald dude with the loincloth, and why does he join the crew? Why do all the robots have matching blonde wigs? What is the scientist’s plan, exactly? Why can’t someone explain to me what’s happening? 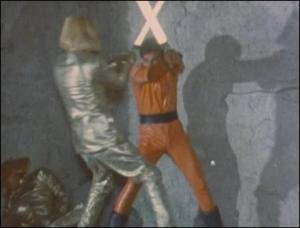 Worth 10 cents? Not even the most mind-altering of drugs can save this one. I want my dime back.

Like movies? Like to read? Check out my book, CINE HIGH, now available for the Kindle and the free Kindle app.