Rewatching 21 Jump Street! Episode ten of season one, “Next Generation,” features babies and beatings, but fortunately not in the same scene.

What’s goin’ down: While Penhall calls in sick, Hanson goes undercover solo to investigate some brutal beatings at a school, tied to a loan shark operation.

Here’s Hanson: After fitting in a little too well, Hanson ends up in a race for student council president, with the evil loan shark kid as his opponent. 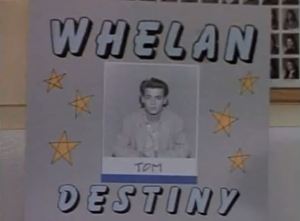 It’s not a campaign poster without fancy yellow stars.

Penhall’s prerogatives: In the episode’s big subplot, Penhall’s stewardess neighbor has a last-minute flight, and has no choice but to ask him to babysit. Get ready for a lot of comedy shtick like him using a T-shirt as a diaper, with his earring as the diaper pin. When the mom doesn’t come home, the baby comes along to the station. Later, romance blossoms big time between Penhall and the baby’s mom, as he considers slowing down on the party life and settling down. 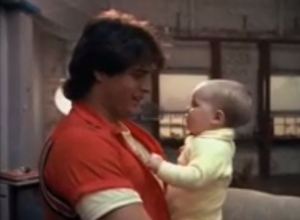 One man and a baby.

Undercover blues: To get close to the suspect, Hanson joins the “scholastic bowl” team, where his knowledge of the law comes in handy. Unfortunately, if he wins, the team will go onto a televised competition, which will blow his cover. 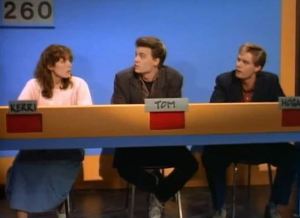 Goin’ to the chapel: There’s a brief reference to a cop named “Espo.” A distant relative of Det. Esposito from Castle? I’ll go ahead and say yes.

Torn from today’s headlines: In the days before cordless phones, Penhall has to fret about not leaving the baby in the bathtub when the phone rings.

Trivia Time: This episode was directed by David Nutter, most famous for his years of work on The X-Files, Nutter also directed the standout first episodes of Smallville, Supernatural, and Arrow.

Jumpin’ or not? There’s about three episodes’ worth of plot in the loan shark/school election/scholastic bowl plot. The story gets muddled to the point where there’s a scene in which criminal goons threaten Hanson over who becomes class president. All the stuff with Penhall and the baby is ‘80s sitcom silliness at its silliest. Not jumpin’.