21 Jump Street rewatch: ‘Low and Away’

What’s goin’ down: The feds have an interest in protecting Johnny, a teen baseball star, but they won’t say why. It all has something to do with the kid’s father, who is surrounded by bodyguards around the clock.

Here’s Hanson: Hanson and Ioki make with some Ferris Bueller-style mischief to sneak inside the school office and get a look at Johnny’s transcripts. They later get some action by duking it out with a deadly gunman. 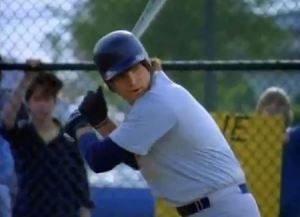 Penhall’s prerogatives: This episode’s all about Penhall, who buddies up with Johnny by joining him on the school baseball team. He enjoys being a star slugger a little too much, to the point where it’s all on him to win the big game.

Undercover blues: Johnny manages to see through Hoffs’s cover and identifies her as a cop. He keeps her secret, though, and this helps the Jump Street work around the FBI’s secrecy.

Goin’ to the chapel: The FBI are total jerks in this episode, ordering our heroes around without giving them any info, hiding behind the whole “need-to-know-basis” thing. 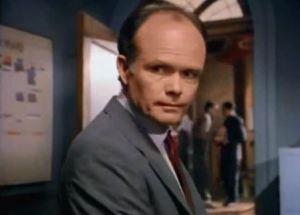 Trivia time: The FBI suit is played by venerable character Kurtwood Smith, known for his roles in Robocop, That ‘70s Show, and hundreds of other parts. Johnny was played Patrick Breen, who later co-starred with Smith on short-lived but brilliantly hilarious 1993 sitcom, Big Wave Dave’s.

The car crash stunt seen in the show’s opening credits is taken from this episode, in which the killer steals a police cruiser and takes off, only to crash it spectacularly. Watch closely: When Penhall says “Holy crap!” in reaction to the crash, you can tell it was dubbed and that he’s saying something not censor-happy. 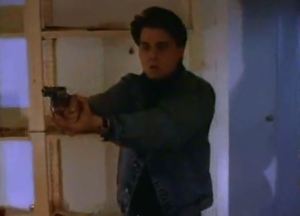 Jumpin’ or not? This is a plot-heavy one, with a lot of back-and-forth about cops breaking cover and access to confidential information. Most of the drama belongs to guest star Johnny, which gives our cop heroes little to do beyond just “TV procedural” stuff. Not jumpin’.