Re-reading the Fantastic Four comics from the start. This week, in issue #74… he’s back. 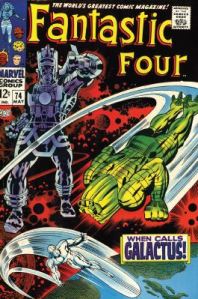 The story begins right in the middle of some soap opera stuff, as Ben walks into Alicia’s apartment, only to find her in there with the Silver Surfer. Uh-oh! Alicia says the Surfer is only there because he needs help, but Ben does the jealousy thing, rubbing it in their faces by eating the chocolates he brought as a gift for her. The Surfer says he has received a summons from Galactus, calling him back to space even though he’s still exiled on Earth. The Surfer gives Ben a vision of an alien figure in space. It’s the Punisher. No, not Frank Castle, the other Punisher, that frog-like monster who Galactus unleashed our heroes back in issues 49-51. 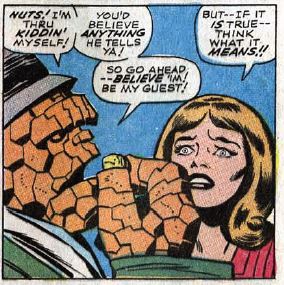 Back at the Baxter Building, there’s a nice bit of “real world” business, as Johnny is working with some construction workers on repairs to the building, hoping to reinforce it against further supervillain attacks. This answers the questions of how the FF’s headquarters can be partially destroyed in each story only to be just fine by the start of the next one. Ben and the Silver Surfer arrive on the Surfer’s board. The Surfer offers a quick recap of who Galactus is, and that Galactus devours entire planets for their energy. The Surfer surmises that Galactus must be starving with hunger to summon him.

Then the Punisher arrives, being drawn to the Silver Surfer’s “pulsations.” (Ew.) The caption describes the Punisher as being half-living and half-robot, and “a merciless hardcore mass of mayhem.” OK, then. The Surfer attacks the Punisher with an “atom-compacting thrust,” which slows down the Punisher but also weakens the Surfer.

The construction workers run away, and Johnny stays behind with Surfer as Ben flies off in his new “jet gizmo” to take on the Punisher. The Surfer’s attack trapped the Punisher in a big rock shell, but that doesn’t last long before the Punisher frees itself. Ben exchanges some blows with the monster and then is sucked up into the sky by some unknown force. Turns out the Punisher also has force fields at his disposal, which he uses to throw Ben down a smokestack.

From there, we cut to Reed, Sue, and Crystal. Reed wants Sue to leave the city, with Crystal as her bodyguard, so the baby is safe from the FF’s enemies. Sue frets about Reed being overly cautious. Then, there’s this weird bit where Crystal sees something out the window, and alerts Reed to it behind Sue’s back. It’s Johnny fighting the Punisher outside. Reed and Crystal close the window, so Sue isn’t alerted to any danger. Reed lies to Sue and says he has to check some things at the Baxter Building, and he leaves. (Could it be possible that this scene takes place in one of Reed’s “secret apartments” mentioned in one of the first few issues?)

Johnny holds his own against the Punisher for a while, until the Punisher takes the fight to the river, dousing Johnny’s flame. Reed arrives on the scene, gets Johnny to safety, and then takes on the Punisher. The Punisher proves his ridiculous speed and strength, twisting Reed around like a big rubber band. 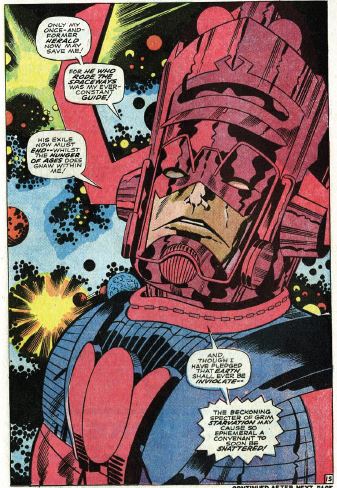 Then we go to outer space, to check in with the big man himself – Galactus!  His ship looks completely different than the last time we saw it, and this will be a recurring thing in every Galactus appearance. Speaking to no one, he says that every star he visits is barren of life, and that although he pledged to leave Earth alone, he’s going back on that promise because his hunger is just that great. He says he’ll give the Surfer his freedom back if the Surfer will help him devour the Earth.

Back to Ben, there’s a page of comedy shtick as he gets out of the smokestack and has to take a taxi back to the fight. There, it’s more fighting (and one-liners) as Ben and Punisher duke it out, with assistance from Reed and Johnny. The brawl ends abruptly when the Punisher disappears. Reed somehow deduces that the Punisher was sent to Earth to find the Silver Surfer, and Galactus has recalled the Punisher because the Surfer is too well hidden.

The Punisher returns to Galactus’s ship, and Galactus orders him back to his “cubicle.” (I hope Galactus lets Punisher hang up some Dilbert and Far Side strips in his cubicle, to bring some levity to the workplace.) Galactus then fires a “life probe” at the Earth in his next attempt to find the Silver Surfer. At the end, Johnny remembers that the Silver Surfer said something about “worlds within worlds” before he vanished. I went back and re-read the whole issue, and nowhere does he say that, and there’s no mention of him vanishing. Nonetheless, that’s our cliffhanger.

Unstable molecule: After showing his combat skills in the last few stories, Reed’s powers are ineffective against the Punisher, who kicks the crap out of Reed.

Fade out: OK, what are we to make of Reed and Crystal lying to Sue like that? I get that you don’t want to put the pregnant lady in danger, but Sue should know by now that the FF is going to face dangerous situation on a regular basis, what with them being superpowered adventurers and all.

Clobberin’ time: I’m still unclear on what kind of relationship Ben has with Alicia. Whether they’re a couple or not seems entirely dependent on whether the plot of any given story demands they are. They’ve come down with a case of “Barney Rubble’s job” syndrome.

Flame on: Johnny demonstrates another new use of his powers: Electricity! He’s able to electrically charge lightning rods on building roofs to slow down the Punisher. Also, his overseeing repairs to the Baxter Building shows how he’s become a real member of the team, and more than just “the kid.”

Trivia time: In his last appearance, Galactus says he can wait “all eternity” with patience, yet here he is so starving that he’s willing to break his promise never to bother Earth again. What changed? Some believe that it’s really Sue’s baby, calling to Galactus with psionic powers. I’m skeptical of this, but it’ll be a detail to look for after little Franklin officially joins the cast. 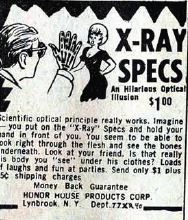 Fantastic or frightful: I’m torn on this one. The whole fight scene ends up being pointless, existing only to tell us that Galactus is back. Also, the issue treats Galactus not as a major event, but merely another member of the rogue’s gallery. This makes him less unique among FF characters, and that’s a disappointment. On the plus side, though, Jack Kirby’s far-out art and Stan Lee’s hilarious comedic dialogue nonetheless make this one a fun, if breezy, read.