What’s goin’ down: Some scumbag is dealing drugs at a performing arts school. The Jump Street cops must now do the all-acting, all-singing, all-dancing thing while sniffing out the culprit. 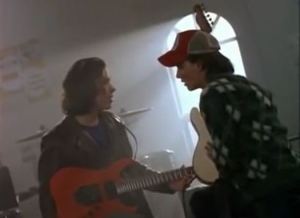 Here’s Hanson: Hanson’s music knowledge helps him out in band class, where he can talk the talk with the rock kids. Also, Johnny Depp is sporting some serious Tim Burton hair while at the station in the opening scene. Filming Edward Scissorhands, were we? 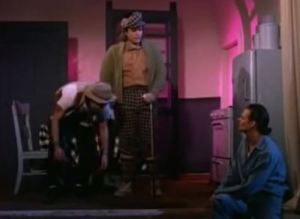 Penhall’s prerogatives: When Penhall performs a scene from The Honeymooners, the teacher has him play it not for laughs, but instead act as if it’s the real him, and not a character. This is some art imitating life, as the “play the character more like myself” thing was something actor Peter DeLuise mentioned in several interviews around this time.

Book ‘em: Booker’s performance art piece. He stands on stage and says, “My friends always ask me, ‘Why don’t you watch TV?’ Because it gives me a headache.” He then puts on sunglasses, picks up a sledgehammer, and smashes a bunch of televisions, with sparks and smoke flying everywhere. It’s the most badass thing that ever did badass. 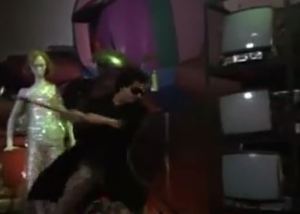 I wear my sunglasses at night, so I can, so I can smash televisions.

Undercover blues: Turns out there’s not one drug dealer in school, but everyone’s on drugs. Instead of pursuing one crook, the Jump Street gang has to deal with a full-blown drug infestation. Their solution? Throw an assembly, and arrest the entire student body at once!

Goin’ to the Chapel: Blowfish, who, let’s not forget, is Jump Street’s janitor, is for some reason put in charge of cataloging all the confiscated drugs. When asked how he knows so much about narcotics, he responds, “Dragnet re-runs.”

Trivia time: In the opening credits, we read, “Music and Poetry by Wolfgang Amadeus Mozart.” Your guess is as good as mine.

Torn from today’s headlines: The movie Fame was released in 1980, and was adapted into a TV series in 1982, and then into another TV series, Fame LA, in 1997. It then got a big screen remake in 2009. The success of Glee and High School Musical owes a lot to Fame. Also, there was Hull High in 1990, one year after this episode. I’m sure nobody but me remembers Hull High, so I can get away with saying it was a totally rockin’ high school music show and wasn’t cheesy or stupid at all.

Jumpin’ or not? This one has a lot of great humor, memorable character beats, and slick visual style, courtesy of superstar director Mario Van Peebles. There are a lot of big speeches about art, emotion, pressure to be the best, and living in the moment, but in this case the speechifying feels more natural. It’s woven into the story in a way that fits the setting. I love this episode so much. It’s jumpin’!

Next week: Do the hustle!