Rewatching the James Bond films chronologically. Just like 1967 gave us two Bond movies, an unofficial one with Casino Royale and official one with You Only Live Twice, the same thing happened in 1983, with two Bonds in one year. First up this time was the official one, Octopussy. (How, exactly, did that title get past all the censors in the world?) 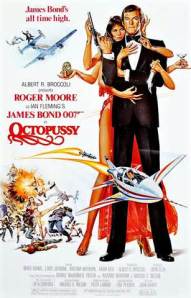 Blond blurb: The Russians are up to no good, with a plan to conquer the rest of Europe. Meanwhile, Bond is on the trail of a stolen Faberge egg, which leads him to India, and a female-led smuggling ring, and an East German circus that… I give up. Can anyone follow the plot of this one? 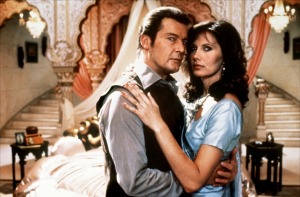 Bond background: After a couple of movies where everyone knows Bond and his reputation, in this movie he’s back to being a spy again, working in secret. There are several references to him working for “Universal Exports,” which I’m assuming is a cover for MI6. Also, Bond is captured after spending the night with a woman, which once again reveals that the ladies are his “blind spot.”

Bond baddies: Head villain Kamal Khan (Shatner: “Khaaaan!!!”) doesn’t do a whole lot except glare angrily at Bond, which he does well. I really like the henchman Golinda, who crushes dice with his bare hands and whose name sounds like a good witch. This is the one with the yo-yo sawblade guy, a nifty but not very practical weapon. Some knife-throwing twins add to the fun as well.

Bond babes: Bond first beds bad girl Magda, who does the Cirque de Soliel escape with her unfolding dress off his balcony. It’s the titular (heh) Octopussy, though, who’s the main squeeze. Never mind that she’s a criminal overlord with her own island full of deadly henchwomen. Bond’s actually into that.

Bond best brains: Oh, so this is the one with the acid-spewing pen. Nice! Bond’s watch gets a lot more gadgets, including a tracking device that gets a lot of screen time. Because this the Moore era, we’ve got a mini-sub shaped like a crocodile. There’s also an amusing bit where Q gets in on the action in the field, doing some surveillance on Octopussy’s hideout and even saving the day in a hot air balloon.

Bond bash-ups: The opening is worth the price of admission, with some eye-popping stunts as Bond escapes capture in a super-speedy mini-plane. There’s an amusing taxi chase through an Indian marketplace, with a lot of slapstick gags. More gags follow during Bond’s Most Dangerous Game jungle escape. It then ends with a three-part finale, with a bomb diffusing followed by a shootout in a mansion followed by an airplane escape with Bond clinging onto the outside of the plane. 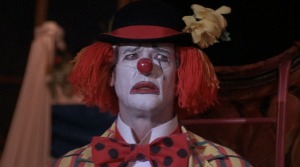 Bond bewilderment: To get past the bad guys while at the circus, Bond disguises himself as a clown, complete with full-on clown makeup. (Really detailed clown makeup, too, which is impressive considering that he only had a few seconds to put it on.) Even stranger, this is foreshadowed in an earlier scene when another 00 agent fights a bunch of guys and then is killed while in the exact same outfit.

Bond baggage: Raiders of the Lost Ark had come out recently. Could it have been an influence? The marketplace chase/fight and Bond’s jungle escape seem a little more Indy than Bond. 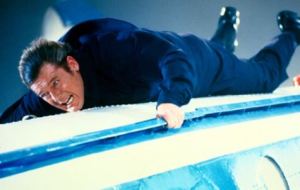 Bond babble: I’ll be honest. This one was a little hard to sit through. The practical stunts and the lavish scenic locations are great, but who can follow this wonky storyline? Add to that the constant puns and wacky slapstick, and you’ve got a movie that’s a total mess.

Next week: Let’s go to the arcade.