Fantastic Friday: Farewell to the king

Rereading the Fantastic Four comics from the start. Here we are, folks. The end of an era. It’s Jack Kirby’s final issue of Fantastic Four. According to suspicious-sounding internet rumors, Kirby allegedly turned in his resignation letter to Marvel the same day he turned in the artwork for this issue.

We begin with some comedy shtick. Ben has a cold. Crystal tries to force feed him medicine, and Ben’s sneezes are so powerful that they destroy an entire room. Reed interrupts, saying that Sue and the baby will soon return to supernatural nanny Agatha Harkness, once the rainstorm currently blowing over New York has passed. 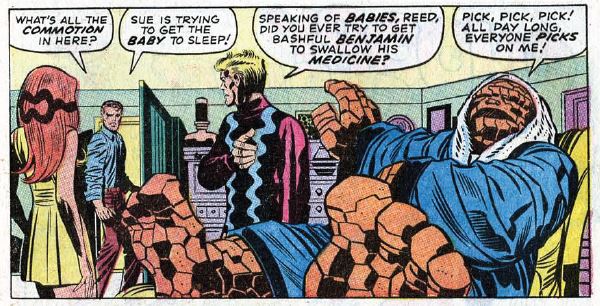 From there, we cut to Namor the Sub-mariner. He and some of his followers are in a submarine in the ocean, “beneath frozen Antarctica,” to investigate a mysterious shock wave. Namor swims ahead and discovers a warm, tropical area in the middle of the Antarctic continent, complete with still-alive dinosaurs. He finds a lone survivor of the shock wave and… it’s Magneto! (This is picking up the storyline from Uncanny X-Men #63, the first appearance of the Savage Land, in which Magneto was apparently killed in a shockwave.)

Then, strange goings-on in New York, as the tops of skyscrapers are mysteriously being torn off by an unseen force and floating off into the sky. Under the sea, Magneto has not only regained consciousness, but found his way into an Atlantean lab, where the high-tech devices can amplify his magnetic powers greatly. He’s granted an audience with Namor, and he proposes an alliance between them, arguing that they are not “truly human.”

Back in Reed’s lab, he has deduced that Atlantis is the source of the magnetic disturbances. He’s sent a probe to Atlantis to investigate. He adds that if there’s a problem, a second press of the button will send a concussion missile along the probe’s path. “To warn them of their folly!” Reed says. Then there’s some action as the magnetic weirdness causes all the futuristic tech seemingly comes to life and attacks the FF. Ben decides to go on the offensive, pressing the button and launching the missile at Atlantis.

The missile trashes part of Atlantis, with Namor using his awesome strength to save his people. Magneto says he traced the missile’s path back to New York. Namor sees this as an act of war, and Magneto promises to aid Namor in the upcoming fight. Magneto thought-monologues to himself how he’s using the situation to goad Namor into attacking the surface world. Magneto hopes Atlantis will kill off all the humans, allowing mutants to rule in their place. 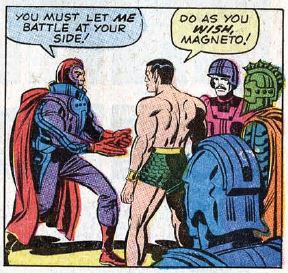 Back in headquarters, Reed chides Ben for firing the missile, as his “vibro-alarm” picks up signals of an entire fleet of Atlantean warships headed for New York, ready to start a war.

Unstable molecule: For as much as Reed is angry at Ben for launching the missile, Reed’s the one who built it to blow up Atlantis with the press of a button.

Fade out: Sue sits this one out again, off taking care of the baby.

Clobberin’ time: Ben, despite all strength, is susceptible to the common cold.

Flame on: Johnny is able to use his flame to draw the magnetized building debris into the ocean. Science!

Four and a half: Franklin finally has his blond hair this issue, after several issues of his brown hair.

Fantastic fifth wheel: Crystal uses her powers to save the day when all the machines in Reed’s lab come to life. She zaps the control panel real good.

Commercial break: Steampunk before there was steampunk: 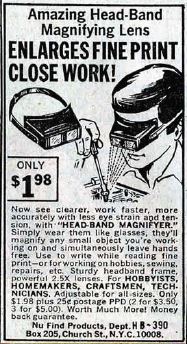 Trivia time: “Wait a sec,” you say, “I thought issue #108 was Kirby’s last issue.” No, #108 was an inventory comic, drawn by Kirby years earlier and kept in a file, to be used as a backup in case they needed a fill-in at the last minute. Marvel history is rife with stories about these inventory comics, and the times they were and weren’t used.

Fantastic or frightful? A slim issue, with not a lot happening. Kirby doesn’t phone it in, managing to create some perfectly Kirby-ish outlandish visuals for his final go-around.

Next: Magneto in the middle.