Rereading the Fantastic Four comics from the start. Writer/artist John Byrne continues to give the series a strong sci-fi feel, this time with a Spielberg-style “magic in the suburbs” story in issue #234. 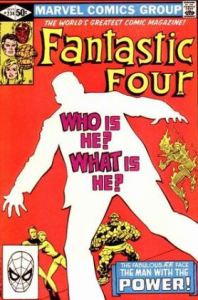 We spend the first couple of pages of this issue with a man named L.R. “Skip” Collins. He’s described as “mired in mediocrity,” but also “the most important man that ever lived.” He lives in an ordinary house, works an ordinary job, and can’t get through to his long-haired hippie-type son. As he drives to work, he realizes he’s a half-hour late, and, just like that, he goes back in time a half hour, to make it to work on time. When locked out of the office, the office key telekinetically opens it from the inside, just after he thinks it. Skip’s boss then tells him he’s going on a business trip to New York. 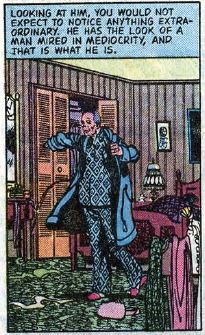 While on the plane to NYC, Skip flashes back to being exposed to a nuclear blast in 1955, when he was in the army. In New York, he sees the tourist sites, including the Baxter Building. There, on the street, he sees Mr. Fantastic and the Invisible Girl walk by, and he follows them. The two of them come across a collapsing building, where Reed saves a falling girl, and Sue uses her force fields to deflect debris.

This is the only beginning, though, as a full-blown earthquake strikes New York. Reed and Sue rush toward the danger, with Skip still following them. Cut to Ben, who is drinking in a NYC Irish pub (and of course the bartender just happens to be named “Mick” ugh…) when the quake trashes the place. Johnny, meanwhile, is with Frankie Raye. He promises to show her that he’s more than just a superhero, and then they make with the kissing. Too bad he has to fly off as soon as the quake hits. He uses his flame to create a pocket of hot air to rescue some falling people.

Everyone regroups at the Baxter Building, where Reed learns that Paris and London are also beset by earthquakes. Reed stays behind in the lab to investigate, while Reed, Sue and Johnny head out into the city for several more pages of the using their powers to help people. That’s when Ben, while on the Brooklyn Bridge, spots Skip watching them. It appears that a chunk of debris knocks Skip into the water. Ben jumps into the water to save the man, but can’t find him. Reed then calls everyone back to headquarters.

Reed deduces that the earthquakes are gravity waves caused by an attack from outer space. The team boards the FF personal rocket, and blasts off into space. Out in the city, Skip, who is somehow OK, sees this, and wishes the city could be back to normal. Just like that, waves of energy flow out of skip, transforming the city back to its pre-earthquake state. Thinking the whole thing was a dream, Skip wanders off back to his hotel.

In space, the FF fly their rocket through the remains of a bunch of destroyed planets, and then into a giant gaseous cloud. Reed calls this a bizarre biological eco-verse — and it’s dying! At the center of the cloud they find… Ego the living planet! Ego says he has traveled across the universe to kill his enemy, and will destroy Earth along with it. 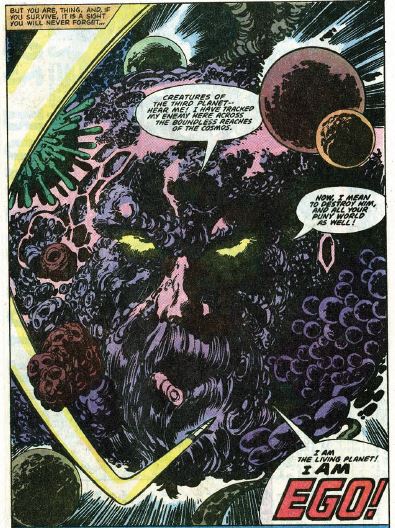 Unstable molecule: Reed not only does the science thing, but he co-pilots the ship alongside Ben.

Fade out: Sue’s continues to show her force fields being more powerful than we’d previously seen, using them to clear huge swaths of debris away from citizens in danger.

Clobberin’ time: While at the bar, Ben says he always stops after one drink, because a guy his size can’t afford to get tipsy.

Flame on: Frankie Raye has more or less come around on liking Johnny again, but there’s more complications to come with the two of them.

Commercial break: Is this legal?

Trivia time: This is Ego the living planet’s first appearance in Fantastic Four. He had previously only appeared in several Thor comics, most memorably in the completely insane Jack Kirby story that debuted him.

Fantastic or frightful? The Marvel Wiki has almost no information on Skip Collins, so what are we to surmise about a godlike, reality-bending character who shows up and then wanders off never to be seen again? He’s definitely a forerunner to what Marvel writers would do with Molecule Man a few years afterward, but as far as this issue goes, it’s more of an oddity than anything else. Byrne’s art continues to be excellent, though.

Next week: Leggo my Ego!