The whole reason I started re-reading the comic on the blog was because of how disappointed I was in the two Tim Story FF movies of the 2000s. Now there’s a new movie, a total reboot. So… what did I think? I liked half of the movie and was disappointed with the other half.

The movie is loosely based on Ultimate Fantastic Four, an alternate version of the FF with them recast as a group of genius teens. This, plus the trailers, clued me in that the movie wouldn’t be epic Jack Kirby action I want to see in an FF movie. Still, I went in with an open mind, telling myself that this would be a brand new version of the characters. In this version, our heroes get their powers from interdimensional travel instead of space travel. The newly-discovered other dimension serves as the MacGuffin for the FF and Dr. Doom to fight over.

The movie really drew me in during its opening scenes, when we meet the young versions of Reed and Ben, with the first few scenes being a surprisingly delightful remake of Joe Dante’s Explorers. From there, we go into a loose adaptation of Ultimate Fantastic Four, with Reed arriving at the Baxter Building. All this “teen inventor” stuff in the movie has a real Spielbergian feel, and it’s here when the movie is at its best. We’re introduced to Sue and Johnny, and their father Frankin becomes a mentor to the group. These scenes have a loose, relaxed feel, and the characters come across as real people.

Once we get into interdimensional travel, things become muddled. The first trip into the other dimension is a good action scene, but when we’re back on Earth, the movie loses its focus. See, even though this is a story about a team, the movie wisely kept the focus on Reed during its first half, setting him up as the main character. I’m totally in favor of this, as I’ve always felt Reed’s name should be among the great adventurers, like Indiana Jones or James Bond. Once the FF get their powers in the movie, however, the movie can’t decide who the protagonist is. The script hops around from character to character, giving time to each but never bringing them together in a satisfying way.

After getting their powers, the FF are taken away to a secret government lab. There’s a short stretch of movie where Reed escapes, and we get a “one year later” title card. Sue, Ben, and the government goons find Reed and bring him back. Then… everything continues on as if he’d never left. His being a fugitive for a year just comes and goes without any consequence. It’s frustrating to have this in the middle of the movie only for it to go nowhere.

How’s the action? Decent, but short. The creators are going for more of a character-based movie rather than nonstop blockbuster action. There is very little of the characters using their powers, and even less of them using their powers as a group. One of the reasons we’re all excited to have live-action movie versions of comic books is to see the powers come to life on screen, and to see how filmmakers use the powers creatively. They’ve done this nicely with Spider-Man and even Captain America, but it’s a downer to walk out of a Fantastic Four movie thinking, “I wish they would’ve used their powers more.”

Miles Teller gives the best performance in the movie. As Reed, he takes a character that a lot of people think is boring and instead gives him some real humanity. Kate Mara is good as Sue. Because we’re in Ultimate-land, Sue in this version is just as science-smart as Reed, and Mara does a great job portraying those smarts. Michael B. Jordan isn’t given much to do as Johnny, establishing him with a rebellious nature but never going anywhere with it. Jamie Bell has even less to do as Ben, to the point where Ben is more of a special effect than a character.

Now the really bad news: Just like the Tim Story versions, this movie gets Dr. Doom completely wrong. They have Doom get involved with the interdimensional travel, giving him powers at the same time the FF got their powers. Instead of fighting our heroes with his own mad genius and arcane knowledge, Doom merely throws stuff around telekinetically. He starts with a few lines of eco-friendly dialogue, which I guess are meant to make us sympathize with him, but then he becomes generic movie monster in the second half of the movie. He only exists to throw things at the heroes and give them something to fight, and not to have any personality or ideology of his own. Actor Toby Kebbell does some interesting things as Doom, often making a point of not looking the other actors in the eye, but, again, he’s not given enough to do.

The real antagonist of the movie is not Doom, but the military man played by Tim Blake Nelson. He’s stuck in the position of wanting to weaponize the FF’s powers for U.S. military. Didn’t we just do this in Jurassic World? Nelson is trying, but this is the jerk-who’s-in-the-movie-just-to-be-a-jerk, something that no movie needs. 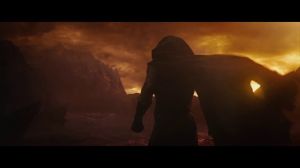 What movie’s producers want to know is, would I see a sequel with this same cast and director? Yes, I would. They’ve laid a groundwork, and the room for improvement is huge. The next movie could be the Dark Knight to this movie’s Batman Begins. As of this writing, there’s no way to know if that’ll happen, or if we’re in for yet another reboot. Either way, Fantastic Four 2015 is flawed, but a slight step back in the right direction.