Fantastic Friday: Insane in the mainframe

Re-reading the Fantastic Four comics from the start. Seems like the epic Negative Zone arc just got started, and now, in issue #255, we’re already barreling toward the big finale. 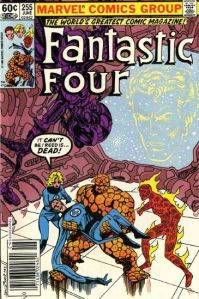 Previously, an alien named Taranith stole Reed’s consciousness to fuel his psionic-powered spaceship and make an escape from a primitive planet. Separating Reed’s body from the ship effectively killed him. (Got all that?) We begin far away from there, in New York City, with Daredevil doing the superhero jumping-from-rooftop-to-rooftop thing. He comes across the invisible barrier around several blocks of the city, so invisible that even his heightened senses can’t detect it. Inside the Baxter Building, at the center of the barrier, Annihilus explains his evil plan to his captive Alicia. Turns out he’s sick and dying. He’s going to merge Earth’s universe and the Negative Zone into one, destroying them both, and ending his own personal pain in the process. He reveals his scarred face to Alicia (but not to us) but she can’t see it because she’s blind. Annihilus flips out, promising to kill Alicia. 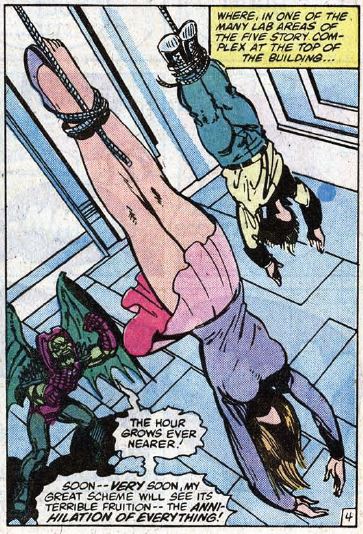 Then we cut to the Negative Zone, where Reed is described as not “dead,” but “mindless.” Johnny tries to fight Taranith, but the alien has deathtraps set up inside the ship. He blasts Johnny with fire extinguisher-type stuff. Sue and Ben chase Taranith around, but because he’s a little worm-like guy, he gets away from them and escapes into further into his ship. He fires up the ship’s engines, and the ship takes off in a spectacular two-page spread. 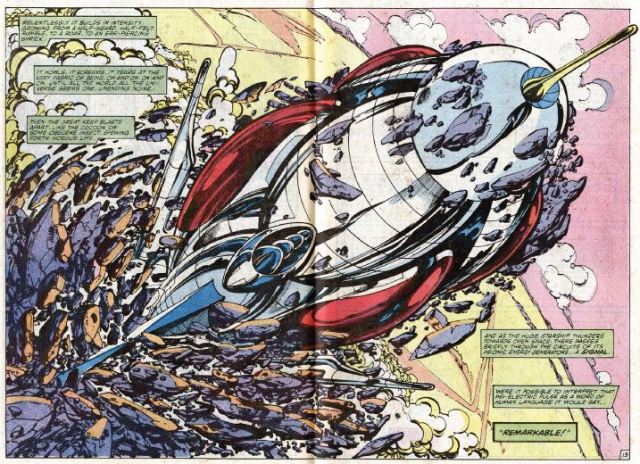 The FF, with Ben carrying Reed’s body, continue to fight their way through the ship. Taranith is about to open a hatch and throw them out into the vacuum of space, but something stops him. It’s… Reed! Reed’s mind/consciousness/whatever has taken over the ship’s computer , and he’s now in control of the whole ship. Taranith hops into an escape pod and takes off, but the pod malfunctions thanks to years of misuse on the planet, and it explodes. An image of Reed’s face appears on a viewscreen. He says he’s set a course for Earth, and he’ll work on a way to getting his mind back into his body. 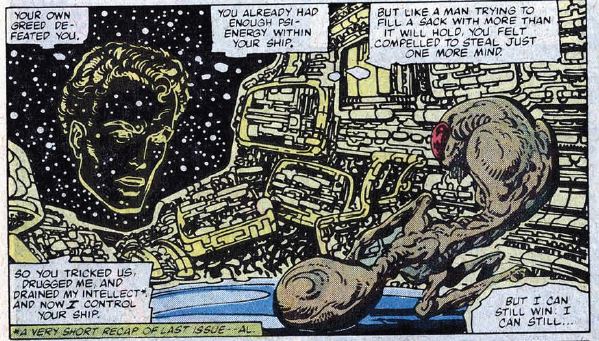 Two weeks later (!), Reed has devised a helmet that allows the computer animate his body, but his mind is still not actually in his body. Okay, sure. The ship heads back to that space tunnel thing from issue #251, only to find it destroyed. On the viewscreen, the FF sees an image of Earth before them. Reed deduces that the two universes are being drawn together, towards mutual annihilation. (Yes, Reed actually says the words “mutual annihilation.”)

To be continued… in somebody else’s comic!

Unstable molecule: We’re told that Reed’s powers give his unconscious body a natural resilience to damage, allowing Ben to carry Reed’s body around during the fight.

Fade out: Sue is the one who builds the special helmet for Reed, following his instructions precisely.

Clobberin’ time: Ben uses his pilot knowledge to figure out how gravity works aboard the ship, and how to find the control room.

Flame on: Johnny suspects there are sensors everywhere in this ship, so his strategy is to fly through the ship as fast as he can, before Taranith can react. Unfortunately, Reed takes control of the ship before we learn whether Johnny’s tactic would have worked.

Four and a half: Franklin is shown in one panel, unconscious and still a prisoner of Annihilus. 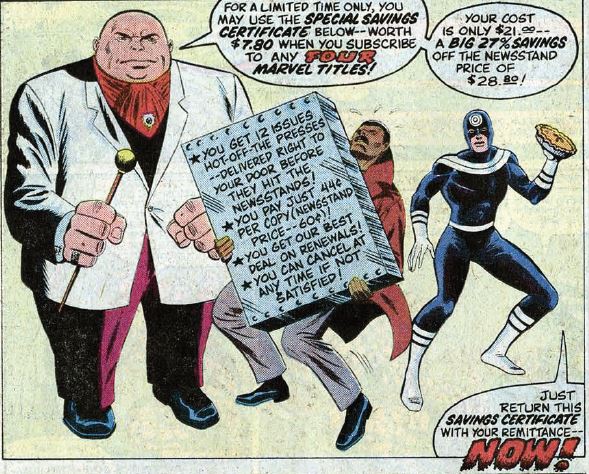 *(Thanks to MarkAndrew for the correction!)

Trivia time: The reason why Annihilus is sick and dying is because Blastaar stole his all-powerful Cosmic Control Rod in Marvel Two-And-One #75.

According to the Marvel Wiki, Taranith never returned after this issue (not counting a flashback in issue #271). That’s too bad, because I always thought he had the makings of a major Marvel baddie — really smart and really, really evil.

Speaking of issue #271, Reed’s experience in this issue, with his brain getting all Matrix-y, will come back to haunt him and subsequently send the team on one of its craziest adventures. We’ll get to that soon enough.

Daredevil’s cameo in this issue takes place between Daredevil #195 and #196. Continuity!

Fantastic or frightful? As a single issue, this one is pretty slim, with not a lot happening. As part of the ongoing Negative Zone story, though, it does what was intended by transitioning from act two to act three. It’s fun to see the tiny Taranith run circles around the FF, and the exterior drawings of the ship in action are some terrific artwork.

1 Response to Fantastic Friday: Insane in the mainframe