Re-reading the Fantastic Four comics from the start. Just as we’re getting used to the new status quo with She-Hulk on the team, we switch gears and spend issue #274 with the Thing and what he’s up to. 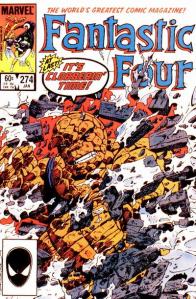 To recap: After the Secret Wars, Ben stayed behind on the alien Battleworld, because he could turn human and back there. While on Battleworld, that planet’s wish-fulfilment effect has been drawing on Ben’s subconscious, with alien variations of his past on Yancy Street and his time in the Air Force. He’s also befriended a super-sexy barbarian swordswoman named Tarianna. This issue specifically is part 2 of a story that began in The Thing #19. Tarianna was kidnapped by an evil figure known only as the Wizard (not the Wizard from the Frightful Four, but a different one). In his pursuit of Tarianna and the Wizard, Ben fought a bunch of Universal Monsters, notably Dracula, the Mummy, and Frankenstein’s Monster, all pulled from his own subconscious. Got all that?

Before we get to Ben, though, the issue starts with some FF subplots. In Connecticut, where Reed and Sue are living with secret identities to raise Franklin, Sue drops an earring which rolls under the refrigerator. She-Hulk is there, in her human form as Jennifer Walters. She transforms into her big green self to move the fridge. What our heroes don’t know is that superstitious neighbor lady Alma Chalmers is spying on them, believing she’s seeing witchcraft. At the Baxter Building, Reed tells Johnny and Alicia (who is really Lyja the Skrull in disguise) that he’s considering leaving the building permanently, now that none of the FF live there, and his inventions have taken up all of their space. Reed can tell that Johnny and Alicia seem to be more than friends these days, and he wonders what Ben would think. He then remarks that Ben must be having “the time of his life” on Battleworld.

Cut to Battleworld, where Ben is in the midst of his fight against Frankenstein’s monster. The monster’s strength is equal to Ben’s, but he is taken out by a tranquilizer dart. A man in green body armor arrives, and shoots Ben with a similar dart. Ben wakes up some time later, inside a horse-drawn wagon, alongside the monster and a man named Gregor Lupus. Ben transforms into his human self to get out of his bindings, and fights his way out of the wagon. The wagon is being led by a Dr. Julius Akerman, a.k.a. the Monster Maker. Akerman transforms Lupus into a werewolf (you saw that one coming, didn’t you?) who fights Ben. Frankenstein’s monster gets loose and kills Akerman. With him no longer in control, the werewolf and the monster befriend Ben.

Ben and the monsters part ways after shaking hands. As he leaves, the monsters fade away into nothingness, showing that they were manifestations of Ben’s subconscious the whole time. Ben seems to have suspected this, because he thinks about whether all this is in his head or if there’s something/someone else pulling the strings. He marches forward on his quest to rescue Tarianna, and we’re given a “To be continued in The Thing #20.”

Then we’re back on Earth, inside the Baxter Building. No one is home, and a tiny probe has broken into the building, flying around inside. It is drilling holes in the building’s walls, inserting small devices of unknown purpose. While there, it encounters the symbiote alien that was, until recently, posing as Spider-Man’s black costume. The symbiote somehow connects to the probe telepathically and convinces the probe to free it. It does, and the symbiote gets out of the building and into New York. This exact same scene is repeated in Amazing Spider-Man #261, and it sets up Spidey’s final confrontation with the symbiote in Web of Spider-Man #1, which later led to the creation of mega-popular villain Venom. Whew.

Unstable molecule: Reed’s considering doing away with the Baxter Building permanently kinda/sorta foreshadows a big change Byrne is planning for the building a few issues from now.

Fade out: There’s a scene where Sue walks by the room she and Reed prepared for the baby, and this brings back all the emotional anguish from the miscarriage.

Clobberin’ time: The rumor is that this crossover issue came about to boost sales for the Thing solo comic. All the Universal monsters stuff doesn’t really get across the far-out sci-fi that was happening in that series, though.

Fantastic fifth wheel: She-Hulk makes a couple of mentions about her being a lawyer. Are we to believe she’s still practicing law in between all her FF and Avengers doings?

Four and a half: This month, Franklin appeared in Amazing Spider-Man #260. He came across the symbiote in Reed’s lab, and it telepathically undid some of the psychic blocks keeping Franklin’s powers in check.

The Alicia problem: Alicia/Lyja doesn’t like the idea of the FF leaving the Baxter Building, saying the building is like a fifth member of the team. This could be because she studied the building as part of her infiltration training, or maybe just because she’s come to care genuinely about the FF.

Commercial break: We’ve all heard of G.I. Joe, but who the heck is this guy?

Trivia time: Continuity error! This issue depicts Battleworld as being alone in space, with all the stars around it extinguished. But, in Secret Wars #12, we saw the Molecule Man restore all those stars.

Akerman is obviously named after Forrest J. Akerman, longtime editor of Famous Monsters of Filmland and spiritual grandfather of all horror movie fans.

Fantastic or frightful? Writer-artist John Byrne had multiple projects going at Marvel during this time, so starting here we get someone else inking FF. The art is still great, but I prefer the thicker, heavier lines we get when Byrne inks his own stuff. Beyond that, this issue does double duty, crossing over with both The Thing and Amazing Spider-Man. It’s just a big monster fight, which is fun, but with little of substance happening.