Fantastic Friday: Tommy doesn’t know what day it is

Re-reading the Fantastic Four comics from the start. Issue #285 is the second of the FF’s three Secret Wars II crossovers. Secret Wars II is oft-hated for how goofy and cheesy it was, but this issue is one of the event’s high points. 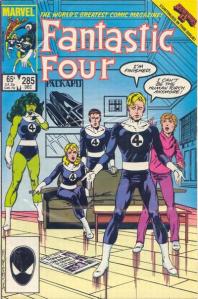 We begin in an office, where a woman named Janet is writing what appears to be a death certificate. The victim is Tommy Hanson, age 13, and the cause of death is third-degree burns. (So, a different Tom Hanson than the one from 21 Jump Street, then.) She then tears the paper out her typewriter and says this won’t be easy. We then flashback to earlier, to meet 13-year-old Tommy Hanson at school. He’s shorter and chubbier than the other kids, and he has a ton of photos of the Human Torch inside his locker. A bunch of (of course) bullies come up with an issue of Celebrity containing an article about the Torch. The bully lets Tommy have the magazine in exchange for doing all his homework until Christmas. A teacher later confiscates the magazine and asks Tommy to stay after class.

The teacher, Miss Welch, and Tommy have a heart-to-heart. She says his hero worship of the Torch is a form of fantasy, and that he needs to focus on the real world. Tommy argues that the Torch is the greatest hero ever. Miss Welch asks to talk to Tommy’s parents, but he says they’re so busy that they’re practically never home. Then things get really sad when Tommy goes home. It’s a couple of pages of just him being alone at home, with nothing to do and no one to talk to. He actually calls Avengers Mansion, where Jarvis the butler answers the phone (!) while serving lemonade to Hercules and the Wasp (!!). Tommy leaves a message for the Human Torch, saying, “I just wanted him to know my name.”

After some time, Tommy hears a noise and goes up to the roof, where we meet a hippy-type guy named Joss. Joss has a remote control model airplane that he’s souped up with some special jet fuel he has concocted. He warns Tommy not to mess with the fuel because of how flammable it is. He adds, “It could turn ya into another Human Torch.” Uh oh…

Cut to later, where Johnny and Reed are at the construction site for the FF’s new headquarters, on the site of the former Baxter Building. They talk some about the all-powerful, godlike Beyonder, still wandering around on Earth. Reed says that although the Beyonder acts childlike, he is above good and evil and should not be judged by human standards. The woman from the opening scene, Dr. Janet Darling, comes clumsily walking into the construction site and nearly falls to her death, only for Reed to save her. She says she works in the burn unit at Children’s Hospital in Queens, and she wants to Johnny visit a fan of his there. He agrees to this without any hesitation.

Johnny flies Dr. Darling straight the hospital, and, as you can guess, the patient is Tommy, burned from head to toe. Tommy is amazed to meet the Torch in person. He says, “I only did it to be like you.” Then he dies, right there in front of Johnny. Tommy’s parents flip out, blaming him for their son’s death. Johnny walks, not flies, out of the hospital. He calls for a cab home instead of using his powers.

At Johnny and Alicia’s apartment, Sue, She-Hulk and Alicia (who is really Lyja the Skrull in disguise) are admiring Alicia/Lyja’s statue of She-Hulk. Johnny enters, emotionally devastated. He tells them about Tommy, revealing that Tommy poured the fuel all over himself and lit a match, in the hopes of becoming another Human Torch. Taking this death seriously, Johnny says he’s decided to give up using his powers. 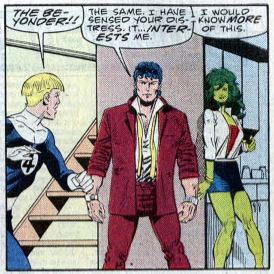 Then the Beyonder appears, saying he sensed Johnny’s distress, and such strong emotions caught his interest. At this point in Secret Wars II, the Beyonder is going through an altruistic phase, running around Earth attempting to do good deeds for people. Sue and She-Hulk don’t know that, though. She-Hulk grabs the Beyonder while Sue surrounds them both with a force field. The Beyonder doesn’t bother with either of them, teleporting himself and Johnny out of there.

From here, it’s a variation of Dickens’ A Christmas Carol, as the Beyonder shows Johnny Tommy in the past. Johnny and the Beyonder are like ghosts, able only to observe. Johnny is again wracked with grief, but the Beyonder encourages Johnny to see how much joy he brought into the lonely kid’s life. “He did not die because of you,” the Beyonder says. “It was through you that Tommy Hanson lived.”

Cut to later, where Dr. Darling has turned in her report. She says Joss is in jail for his illegal jet fuel concoction, and she and her boss are both perplexed as to who this Beyonder character is. She concludes with a quote from F. Scott Fitzgerald, “Show me a hero, and I’ll show you a tragedy.” The final page is Johnny, flying through the air, having grown from this experience.

Unstable molecule: Reed says his plans for the FF’s new headquarters will go down three times deeper into the Manhattan bedrock, and will be three times taller than the previous Baxter Building.

Fade out: Like almost every Marvel character during this time, Sue dumbly thinks brute force can stop the Beyonder, believing that Reed will be impressed once he sees she’s one who successfully caught him.

Flame on: This story calls back to the urban legend about the Human Torch not appearing in the ‘70s FF cartoon for fear of children lighting themselves on fire to imitate him. This story has been proven false many times over the years (it was really a licensing issue).

Fantastic fifth wheel: She-Hulk mentions losing the ability to turn back into a human, with a convenient footnote reminding readers to go buy the Sensational She-Hulk graphic novel.

The Alicia problem: Alicia/Lyja suggests giving Johnny a cup of tea, “black with two sugars.” Is she confusing tea and coffee because she’s really an alien in disguise? 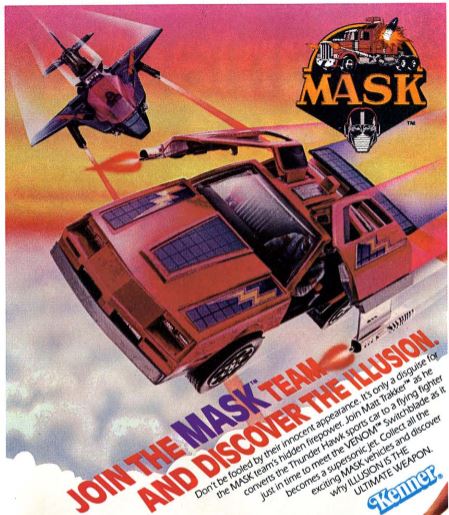 Trivia time: The Marvel wiki alleges that this story was never revisited, in the way that Spider-Man writers kept coming up with excuses to revisit “The Kid Who Collected Spider-Man,” by bringing in the kid’s siblings and whatnot. It’s probably for the best.

Fantastic or frightful? This really is one of the best uses of the Beyonder character. Most of his appearances were comedic, with him learning to roller skate or some crap, but in this one he actually comes across as this all-powerful reality-bending alien. So, even though there’s a lot of sadness in this issue, there’s also a lot of Spielberg-style sense of wonder, making this one work terrifically.

Next week: I dream of Jean.