Re-reading the Fantastic Four comics from the start. Just like one of Jack Kirby’s last stories on the comic was a throwback to 1930s gangster action, John Byrne’s last full arc on the comic also takes us back to the ‘30s, in issue #291. Synergy!

In the previous issue, Reed tragically yet heroically died while closing the Negative Zone portal and defeating Annihilus. This also caused temporal weirdness to happen, sending Sue, Johnny, She-Hulk, and special guest star Nick Fury back in time to the year 1936. We begin the team landing the S.H.I.E.L.D. flying car in an alley, and Fury again informing us it’s 1936. He was a kid growing up in NYC at the time, and that somehow makes him know the exact date. Sue tries to maintain her strength while grieving for Reed, saying the Fantastic Four must go on without him. She turns the team invisible so no one sees them and changes history, etc. Fury then turns on the car’s hologram projector so it looks like a beat-up UPS delivery truck, which fits right in with the old-timey NYC cars.

They discuss where to go. Fury says S.H.I.E.L.D.’s “granddaddy organization” won’t be of much help, and he considers leaving for Germany to do something about “a certain paper-hanger.” They’re interrupted when cops begin chasing them, because of the UPS truck’s modern-day license plates. They drive through a distortion of some sort, and end up back in the present. Johnny flies off to visit Alicia (who is really Lyja the Skrull in disguise), wondering if she too was trapped in 1936. He finds her at their loft apartment, and she has no idea that time is warping. Then it warps again, and Johnny finds himself returned to the past.

The rest of the team doesn’t fare much better, having driven right into a wall that was supposed to be S.H.I.E.L.D. headquarters, but in ’36 was just a wall. Fury suffers a blow to the head, knocking him out. Sue turns invisible and wanders off to find help, leaving She-Hulk behind to watch Fury, under orders not to interact with the locals. Alone in the city, Sue’s thoughts dwell on Reed.

And then this happens: 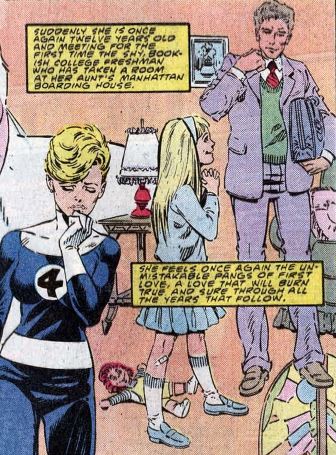 This hugely uncomfortable panel has, as you can guess, been the source of much controversy over the years. To Marvel’s credit, they retconned this during the 2012 Matt Fraction Fantastic Four series, establishing instead that Reed and Sue are the same age, having met when they were both in college. Marvel even re-ran this panel on an editorial page with a “what was (or not?) innocent then is not appropriate now” explanation.

Back to the story at hand, She-Hulk is contacted by the S.H.I.E.L.D. satellite, reporting that time is fluctuating wildly between the past and the present, and they’re caught up in it. She-Hulk is then distracted by a man being chased by a car full of armed thugs. She wrestles with whether to get involved or let history play out as it always has, but she can’t help herself. She steps in and rescues the guy.

The thugs run off, but the man sticks with She-Hulk. He’s a jazz musician named Licorice Calhoun (sheesh). What’s more, he explains that he has magic dreams that somehow come true when he wakes, and a local club owner/mobster wants to use this power for his own gain. She-Hulk is skeptical, saying maybe his dreams are just coincidence. Nick Fury has awakened, and is listening to a report on the radio about a German leader involved in peace talks. He says “the nightmare” is about to happen again, and it’s up to him to stop it. He fires up the flying car and takes off.

Sue meets up with She-Hulk and Calhoun. Sue figures out what Fury is up to. He’s flying to Berlin to assassinate  the one and only Adolf Hitler. In order to protect history, the FF must stop him.

Unstable molecule: We don’t learn much new information about Reed from Sue’s flashback, except that they met while he was a boarder at her aunt’s house. The Marvel wiki informs me that this aunt’s name is “Marygay Jewel Dinkins.”

Fade out: Sue can’t keep her teammates and the car invisible for very long, even though we’ve seen much greater use of her powers in previous issues. I suppose this is because she’s under serious emotional distress.

Flame on: Johnny says this doesn’t feel like any of the other adventures where the FF has ime-traveled, showing how he’s grown, learning from past experiences.

Fantastic fifth wheel: She-Hulk dives into action to save a life, no matter the consequences, which speaks a lot to her character. She’s also very lawyer-y in her skepticism of Calhoun’s powers.

The Alicia problem: Many have wondered over the years how Lyja faked Alicia’s abilities as a sculptor. In this issue, we actually see her in the process of making a sculpture. Is it possible she studied how to recreate the sculptures in her preparations to infiltrate the FF? 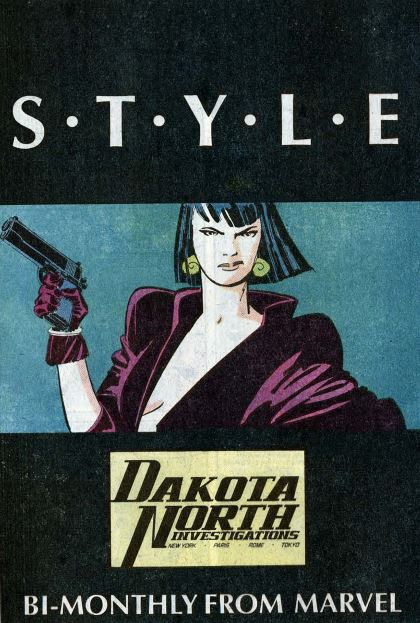 Trivia time: Nick Fury says the 1930s was before the existence of any superhumans, predating Captain America and the original Human Torch. Later comics would show this to be inaccurate, introducing a whole slew of ‘30s-era heroes, such as the Night Raven, Dr. Nemesis, Achilles, and the hilariously-named Asbestos Lady. Going back further, the Runaways met a whole slew of superhumans when they went back to 1907, including the Wonders and the Abjudicator. Not to mention that the Marvel universe has always had immortals of various kinds hanging out on Earth since ancient times. Also, Wolverine.

The inker for this issue is P. Craig Russell, who went on to have huge success as an artist, mostly with DC/Vertigo comics.

Fantastic or frightful? Yeah, that Sue/Reed flashback is unfortunate, and the depiction of a 1930s African American is also kind of unfortunate. Mostly, though, this one is just a set up for the next issue, with some wacky car-related hijinks.

Next week: Springtime for Hitler.