Reading the Fantastic Four comics from the start. One of the big deals about this “new” Fantastic Four is that the Thing, in his spikey form, is as strong as the Hulk now. That means in issue #320 it’s time for another Thing/Hulk slugfest!

We begin in the desert outside of Las Vegas, for a secret nighttime meeting between Dr. Doom and the Hulk. Only, this version of the Hulk might be different from the one you know. After surviving a nuclear blast, the Hulk has reverted to a grey-skinned form, with (somewhat) normal intelligence. Instead of “mindless monster,” he’s now more of a “hard-fightin’ thug” type. As such, the Hulk now works as a Las Vegas mob enforcer, going by the name Mr. Fixit. This might sound ridiculous, but writer Peter David made it work, cranking out some of the all-time best Hulk stories ever during the Mr. Fixit years.

The Hulk is furious to learn that Doom is the one who’s secretly called him for this clandestine meeting, and the two have short fight. Doom incapacitates the Hulk with a device that scrambles the nerve impulses in the Hulk’s brain. (If this tech exists, why doesn’t everyone use it when they fight the Hulk? I guess Dr. Doom wouldn’t allow such a thing.) Doom says he wants the Hulk’s help in retaking his kingdom of Latveria back from the usurper Kristoff. In exchange, Doom offers the Hulk protection, wealth, status, and respect. The Hulk says he already has all of that as Mr. Fixit. Doom says he’ll recruit the Thing instead, because the Thing is now leader of the FF, and has become just as strong as the Hulk. Hulk gets furious, saying that he’s defeated the Thing every time they’ve fought, and he’ll do it again. Doom knows how to push Hulk’s buttons, saying that with increased intelligence comes increased cowardice. Hulk says he’ll prove he’s not a coward, and he leaves for New York, to pick a fight with Ben.

At FF headquarters, we’re still down the Fantastic Three — Ben, Johnny, and the Sharon Ventura Ms. Marvel. Johnny and Alicia (who is secretly Lyja the Skrull in disguise) invite Ben and Sharon to join them for an afternoon on the Staten Island Ferry, but Ben stays behind. Alone, he ponders what it means to be the leader of the team, and how he has responsibility to keep morale up. He heads up to the roof of Four Freedoms Plaza to overlook the city, where of course he’s attacked by the Hulk. 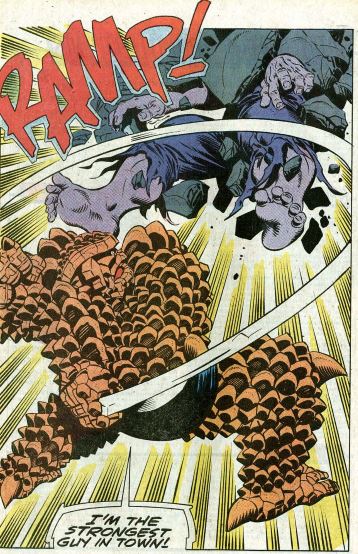 The rest of this issue is one big punch-em-up. Because the rest of the world currently believes the Hulk is dead, Hulk doesn’t say anything throughout the fight, fearing his voice will give him away. Ben somehow assumes this is a clone of the Hulk. They fall/jump from the rooftop down to the street, where they throw cars at each other. Ben is unprepared for Hulk being smarter and knowing how to really fight, while the Hulk is unprepared for Ben now having the same amount of strength he does. They fight down into the sewer and then back up onto the street, where Ben pummels the Hulk so hard that it appears Ben had finally defeated the Hulk. But then, somehow, a second Hulk appears! It’s the classic green-skinned “dumb monster” Hulk.

That’s the cliffhanger, to be continued in Incredible Hulk #350. Here’s a quick recap. The green Hulk is actually a Hulk robot from The Eternals miniseries, which Doom recovered and reprogrammed. Ben defeats the robot and deduces that Doom is behind this. Ben and the Hulk fight again. This time the Hulk wins, thanks to Doom encouraging him to fight dirty. Hulk and Dr. Doom form an uneasy alliance, promising each other power from their empires (Vegas for Hulk, and Latveria for Doom). The Hulk then leaps off, leaving Ben still unconscious, to crossover in an Avengers story before making it back to Vegas.

Clobberin’ time: Thing/Hulk fights famously end in either stalemates or are interrupted. That’s the case again with this one, where Ben wins the first round and Hulk wins the second.

Flame on: Johnny employs comic book logic, saying not to worry about Dr. Doom’s scheming the FF won’t have to mess with him again for a while.

Commercial break: Look at Namor break the fourth wall. And he makes a pun! He’s wacky. 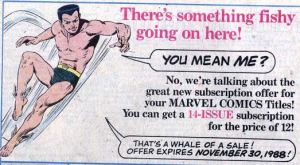 Trivia time: Because this is Marvel, even the Hulk robot has a convoluted history. It was built by a bunch of college students for use as their school mascot (!) only to become overtaken by the power cosmic (where Galactus and the Silver Surfer get their powers) and fought the Eternals. Much later, it’ll be revealed that the robot was built by the Mad Thinker, and merely found and reprogrammed by the college students.

Fantastic or frightful? There’s barely any story here, but it promises a Thing/Hulk fight and it delivers. Thing/Hulk fights are why we love comics, so I can’t hate this.

Next week: Even more Thing/Hulk fighting!