Reading the Fantastic Four comics from the start. Issue #325 wraps up the storyline that’s been happening during the Inferno crossover. Johnny’s powers are out of control, Mantis wants the FF’s help to rescue her son from aliens, and Kang stranded Johnny. Now you’re all caught up.

We begin with the Silver Surfer surfing through space. At this point in Marvel history, he’s been freed of his captivity on Earth, but still visits for crossovers and whatnot. He investigates a disturbance near Mercury, where he finds Johnny floating in space. Johnny’s newly increased powers are barely keeping him alive. Johnny fills him in on what’s happened. When the Surfer learns Mantis is in involved, he grabs Johnny and speeds back to Earth.

At FF headquarters, Ben, Sharon and Mantis are preparing the FF’s spaceship for launch, for a dual mission of rescuing both Johnny and Mantis’ infant son, who had been abducted by plantlike aliens called the Cotati. The Silver Surfer arrives with Johnny, and he Mantis catch up. (They have a history, these two.) The Surfer tries to cure Johnny, but the demonic of Inferno is somehow stronger than the Power Cosmic. 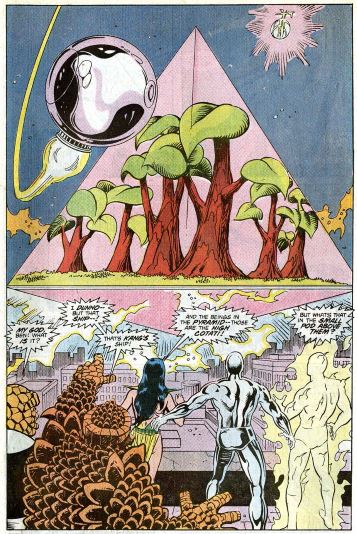 Speaking of cosmic, three objects appear in the sky over New York. One is Kang’s time ship, the other is a big pyramid with the Cotati (who are big trees) in it, and the third is a small pod which Mantis says holds her long-lost son. Kang steps out of his ship and says the Cotati will let Mantis live if she agrees to their terms. She, the Surfer, and the FF refuse, so the Cotati send their followers, the Priests of Parma. They’re a bunch of kung fu fightin’ monks, so we get several pages of fighting.

The monks are able to electrocute Ben and Sharon, but they’re no match for Johnny’s new powers or Mantis’ awesome fighting skills. Kang manages to subdue the Silver Surfer with some 30th century technology, until the Surfer’s surfboard flies up behind Kang and knocks him down. (The time-traveler didn’t see that coming.)

Mantis confronts the Cotati, engaging them in a “battle with the mind,” which I guess is some sort of psychic vs. psychic fight. The Cotati are defeated, and vanish into what Mantis says “the realm of pure thought.” Knowing he’s been beaten, Kang flees into his spaceship and disappears to another time. Mantis says that in order to pursue the Cotati and get her son back, she must abandon her physical form. She kisses the Silver Surfer goodbye, and then simply drops dead! Heartbroken, the Surfer returns to space. Sharon comments on Mantis’ self-sacrifice, saying “Nobody’s ever been as alone as that one.” Bummer. 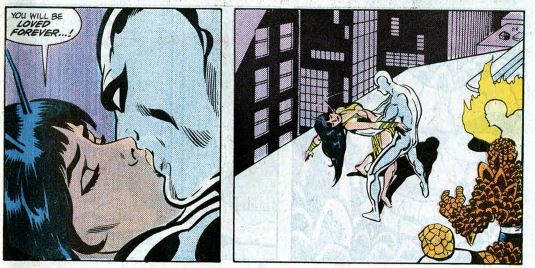 Clobberin’ time/Fantastic fifth wheel: At one point during the fight, Sharon’s heart stops when one of the monks electrocutes her. Ben uses his strength to give her super-strong CPR through her rocky hide. Perhaps this is a metaphor for their relationship, in that he’s the only the one who can “get through” to her?

Flame on: The issue ends with Johnny swearing revenge on Kang, saying that Kang will be in trouble if or when he returns.

Commercial break: I looked them up and sure enough, both of these “one-time offers” are on Youtube. 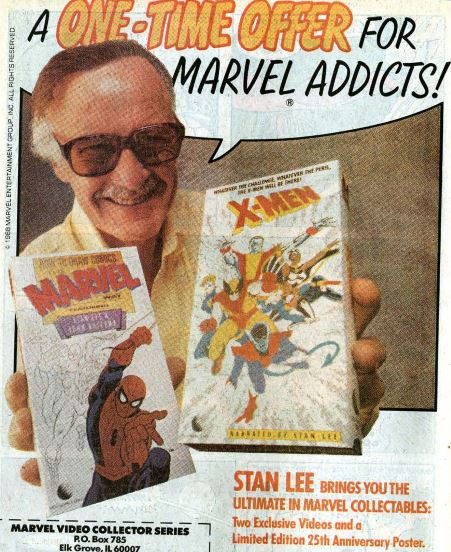 Trivia time: Although it’s barely mentioned in this issue, this wraps up the Inferno crossover. I’m going to try to summarize it here, but (as is the case with X-Men lore) it’s way too complicated. Cyclops’ second wife Madeline Pryor was revealed to be a clone of Jean Grey. We met lil’ baby Nathan Summers, who would go on to become Cable. Illyana Rasputin (a.k.a. Magik of the New Mutants) lost her demonic powers and was de-aged back to childhood. The X-Men and X-Factor teams learned of each other’s existence and stopped the demon invasion. That’s all I’ve got.

Not counting her unofficial appearances in other companies’ comics, Mantis returned to the Marvel Universe in Avengers: Celestial Quest, where her soul was restored, and she helped the Avengers save the life of her son. The son, named Quoi, decided to stay with Cotati and make a new life with them. (There was an another Avengers story where she came back as a villain married to Kang, but this was revealed to be a Space Phantom disguised as Mantis.)

Fantastic or frightful? A simplistic ending after such a long-winded set-up. We get a lot of action, and we kinda/sorta wrap up Mantis’ storyline. All that is good, but there’s not much else of substance here.

Next week: Look who’s back.