Fantastic Friday: Not so vengeful

Reading the Fantastic Four comics from the start. Last week, we wrapped up the Atlantis Attacks crossover, and this week, in issue #334, we’re right in the middle of the Acts of Vengeance crossover. That’s Marvel for you — a new crossover every week. 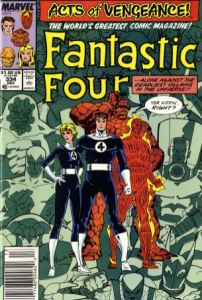 The premise of Acts of Vengeance is that all the superheroes are fighting villains they wouldn’t normally fight. The plot description is pretty much the same as that description of the premise — a bunch of megavillains, including Dr. Doom, the Kingpin, Magneto, and the Red Skull, get together with a plan to organize all villains and send them after heroes they don’t normally fight. It’s later revealed that the whole thing was secretly orchestrated by Loki as a way to bring down Thor. 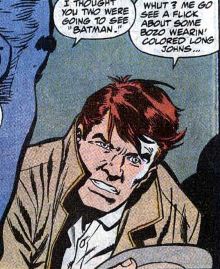 This issue begins with a mysterious figure skulking around the outside of Four Freedoms Plaza, with a device that can hack into the building’s defenses. Ben, who is still in human form, and Sharon, still in her Thing form, are returning from a night on the town, with the security tech going haywire. After some jokey bantering about this, we see Reed, Johnny, and Alicia (who is secretly Lyja the Skrull in disguise) discussing the government debating a superhero registration act. There’s also more business about building security as Reed plans to install retinal scanners for all members of the team. 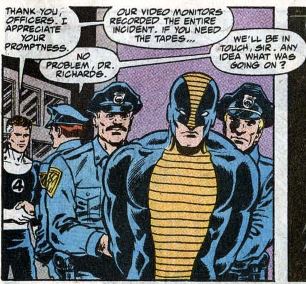 The security alarms go off again, and the heroes rush into action, only to find that the building’s defenses have defeated the Constrictor, whom Reed describes as a “two-bit hood.” The police show up and take the Constrictor away. The team then resumes discussion of the registration act. Reed says some people fear that registration means the government will militarize superhumans, while others think it will lead to an increase in superhumans hiding as outlaws and fugitives.

From this point, the issue becomes a repeating cycle in which the building’s defenses defeat another villain, after which our heroes discuss registration some more. The Beetle and the Shocker are both defeated without the FF lifting a finger. Reed eventually decides to testify in Washington DC on behalf of superheroes everywhere, not necessarily for or against, but to keep the lines of communication open.

The FF take off for Washington DC. After they leave, Thor and Iron Man show up at Four Freedoms Plaza. The Avengers’ Hydro-base was recently destroyed (in Avengers #311) so they are there to ask the FF for a place to crash. Because Cap and Thor don’t have the retinal scans, however, the building’s defenses attack them, too. I don’t know what the building’s energy beams are, but they’re powerful enough to hurt the all-powerful Thor. The two of them leave, with Thor joking that next time they should phone ahead.

There’s an entire page devoted to the mysterious figure from the start of issue navigating his way through NYC’s public transportation, eventually hopping a bus for DC. The FF then arrive at the Capitol Building, not aware that another one of the mystery man’s hacking devices is affixed to the Fantasticar. To be continued, I guess.

Unstable molecule: Reed doesn’t appear to take a side for or against superhero registration in this issue, although that will change in upcoming issues.

Fade out: Sue appears to be against registration, arguing that heroes with secret identities be allowed to keep those secret identities. She shows sympathy for the pro-reg side, though, saying “they’re just scared.”

Clobberin’ time: Ben remarks that flying the Fantasticar is a lot easier with human-sized hands. So much for the thought that Reed built controls specific to his size as the Thing.

Flame on: This isn’t the first time that Johnny has encountered the Beetle. They duked it out back in the Beetle’s first appearance in Strange Tales #123.

Fantastic fifth wheel: Sharon is seen reading The Dancing Wu Li Masters by Gary Zukav, a real-life book about advanced physics published in 1979. This is the creators still trying to play her up as “the smart one.”

Four and a half: There’s a running joke about Franklin wanting to go to a museum to see dinosaurs, leading to this terrifying panel of Reed stretching into a dinosaur shape for him:

The Alicia problem: If Lyja is wearing contact lenses to simulate blindness (as will later be revealed), then how does Reed’s retinal scanner work on her? I think we can assume she did some shape-shifting switcheroo at the last minute so the scanner read her “real” eye at that moment.

Commercial break: Be a video warrior!

Trivia time: What happened in Avengers #311? The Avengers Hydro-base, also known as Avengers Island, was attacked by Doombots in the opening chapter of Acts of Vengeance. Quasar and a bunch of S.H.I.E.L.D. agents, including Peggy Carter, were the only the only ones home at the time, and not able to stop the Doombots from sinking the island. Years later, the Hydrobase was restored when the Avengers were rebranded as “Avengers Idea Mechanics,” but that didn’t last long. According to the Marvel Wiki, the Hydrobase’s current status is abandoned.

Fantastic or frightful? The joke here is supposed to be that these are lame villains, not good enough to fight the FF. But when the headquarters defenses also defeat frickin’ Thor, the joke instead reads that the building is ridiculously powerful. Still, it’s amusing to have a “hangout” issue seeing our heroes do everyday stuff.

Next week: It’s getting political up in here.