Friday the 13th: The Series rewatch – The Poison Pen

I saw The Omen too.

In the second episode, “The Poison Pen,” we’re diving deep into “religious horror” territory, I guess to further give this series its own identity outside of its slasher movie namesake. At an all-male religious sect (the script never uses the words “monastery” or “monks”) a man is using a cursed antique pen to predict/cause deaths in the future. To get the pen back, Ryan and Micki go undercover, with Micki unconvincingly disguised as a man.

After a lot of sneaking around at night and a few more murders, it’s revealed that two of the not-monks are secretly escaped convicts, using the pen to kill off the sect’s leaders so they can sell their land to a greedy developer. Micki and Ryan get the pen back after the convicts are taken out by a guillotine (!), which the pen of course predicted. 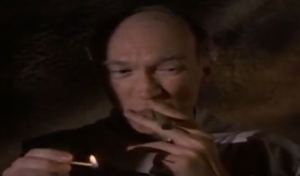 When the show is smart: We can laugh all we want about how Ryan and especially Micki fail to pass themselves off as members of the sect, but the show cops to this, with the villains not believing them from the start, suspecting them to be cops or investigative journalists.

When the show is cheesy: Did they explain why this religious sect owns a guillotine and I missed it? Also, a guillotine by itself just isn’t spooky enough, so the blade has to come to life and fly around the room during the finale. 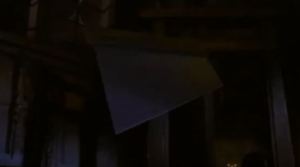 This flying guillotine needs no master.

Devilish dialogue: Jack: “I thought you were meditating.” Villain: “I was pre-meditating.”

– Micki is played by Louise Robey, credited as just “Robey” in an attempt to create a new Madonna/Cher type. These days she just goes ahead and uses her full name.

– The villain is played by actor Colin Fox, who would later appear in two more episodes, each time as a different villain. 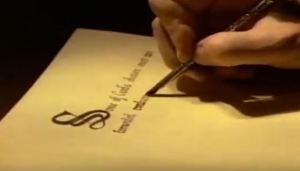 Back in the vault: An odd choice for the second episode. Someone who hadn’t seen the premiere would probably have no idea what this new show is about. There are a few spooky scenes, such as Micki attacked by a huge spider, but that’s about it.