Friday the 13th: The Series rewatch – Badge of Honor

The series turns into Miami Vice for a week in episode twenty-three, “Badge of Honor.”

A close-to-retirement cop gets hold of a cursed antique sheriff’s badge, which he uses as a weapon to go vigilante on a ring of evil counterfeiters. Meanwhile, Micki romances Tim, an ex-boyfriend who (of course) is revealed to also be part of the counterfeiters.

After lots of cops vs. crooks action, and lots of ‘80s cop show saxophone music, both the vigilante cop and the counterfeiters die in a shootout. Tim, who is revealed to be an undercover FBI agent, is also shot. 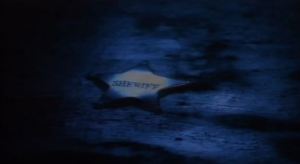 The cursed badge doesn’t do much interesting. It just kills whoever it touches.

When the show is smart: Outside of the gangster stuff, the real story in this episode is Micki and Tim’s whirlwind romance, and Ryan’s jealously. After everything Ryan has been through in the last couple of episodes, it’s understandable that he doesn’t want his newfound monster-hunting family to be broken up.

When the show is cheesy: The height of Miami Vice’s popularity had been years earlier, but that didn’t stop the show’s creators from aping it in a big way, with the sylin’ nightclubs, edge gangster dialogue, and so, so much saxophone music. 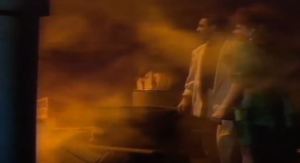 Devilish dialogue: “Back in the old days, it was simple. There were cops, and there were crooks. Today, I can’t tell the difference.”

– During the nightclub scene at the start of the episode, the song playing is Killer Instinct, sung by Louise Robey, F13’s own Micki!

Back in the vault: It’s great how the show’s creators continue to try new things and different genres, but this one come off as trying too hard. The conflict between Micki and Ryan is good, but the rest gets a shrug.

Next: In the pipeline.