Reading the Fantastic Four comics from the start. Issue #359 offers some far-out sci-fi action, and I continue to turn around on Tom DeFalco’s writing.

To recap: The FF rescued Alicia from the Skrulls, with her having no memory of everything that happened for the last hundred issues. Thanks to sabotage from the Mad Thinker, the FF’s ship ended up stranded in space, countless light years away from Earth. Reed begins work at creating a new hyper-drive and new shield from other parts of the ship, but says this might take him years. Alicia demands answers from Ben as to what’s happened during her absence, especially how Johnny married a Skrull that had impersonated her. There’s no time for answers, though, because an unidentified ship approaches them.

On board the other ship, we meet the armor-clad Devos the Devastator as he fights a bunch of alien birds. He kills them all, saying that he is a man of peace, who has made it his mission to destroy any species he deems to be violent and warlike. He has a small black cube sealed inside an egg-shaped device, saying that is the only enemy he could never defeat. He then spots the FF’s ship and snags them in a tractor beam. 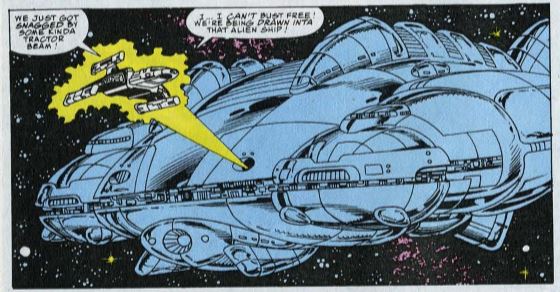 The FF and Alicia enter Devos’ ship, where they fight their way through a bunch of his deathtraps, including a big robot and a bunch of alien monsters that Devos keeps in some sort of personal zoo. Most of this issue is the FF fighting the monsters while Devos watches, determining the FF to be biggest threat he’s ever encountered. During the fight, Alicia keeps following Ben for safety, while Johnny is heartbroken that Lyja the Skrull, the woman he married, is dead.

Devos joins the fight in person, proving able to take on four FFers in a fight. Devos uses a power grid to make himself stronger, but when Reed and Ben knock him back into it a second time, his armor overloads with power and is damaged. 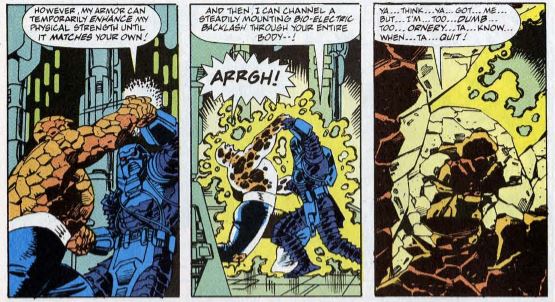 Devos releases all the animals in his zoo to cover his escape in a shuttle. As if that’s not enough, he cause deadly acid to be released in his ship’s air, which melts all the animals. (Harsh!) Sue protects everyone with a force field while Reed restores the oxygen. 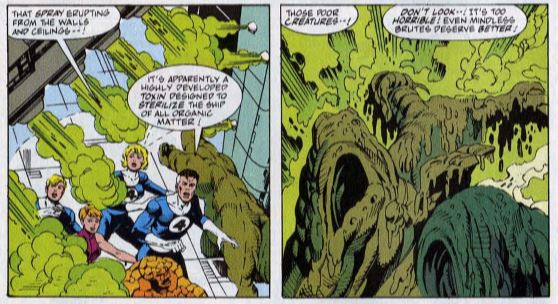 Now in charge of Devos’ ship, the FF plot a course back to Earth. We then see that the egg-shaped device from earlier has cracked, and that cube-shaped thing (whatever it is) is about to escape. 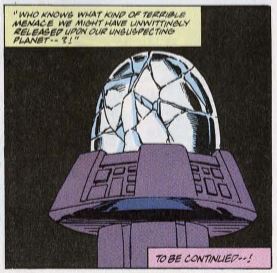 Unstable molecule: Devos appears specifically designed to counter each member of the FF. His armor can electrify Reed when Reed tries to stretch around him…

Fade out: …his scanners can spot Sue when she’s invisible…

Clobberin’ time: …he has strength to equal Ben’s…

Flame on: …and he has a frost ray to cut out Johnny’s fire power.

Commercial break: The ads for Hook were trying to recreate the 1989 Batman ads, with just an image in place of the title. Did that work? I’m thinking that didn’t quite work.

Trivia time: Like Lyja and Paibok, Devos will be back just a few issues from now. Writer Tom DeFalco appears to be introducing these new characters just so they form a new team in the near future. Much later, Devos returned to take part in the Annihilation and Realm of Kings crossovers.

Fantastic or frightful? Basically one big fight scene with a layer of Star Trek technobabble on top. Not much happens, but it’s a nice throwback to the thought of the FF being explorers and old-timey pulp adventurers.