Rewatching the 1988 movie Willow scene-by-scene. Why? Because it’s freaking Willow! Our hero enters a larger world, so let’s pull the camera way, way back to see just big of a world this is, 22:41-23:36 on the Blu-ray.

Not that I haven’t enjoyed all this time spent in the Nelwyn village, but I’m looking forward to getting into the real adventure part of this adventure movie. This section of the movie starts the obligatory travel montage, only this montage split into two parts, with other scenes in between. First we see Willow and his group climbing a grassy hill with a bunch of spikey rock formations in the background. Some fans have speculated that these rock formations form a sort of maze around the Nelwyn village keeping it from the outside world. Next, the company passes by some waterfalls. Remember that the High Aldwin told the group to follow the river. Is this meant to be that river? Those two shots are all we get of the montage. I suppose the upbeat travelling music in the score makes it feel like more time passing.

There’s a shot of the baby crying. Willow tells Meegosh to stop, and then the rest of the group. Vohnkar asks why, and Willow says the baby is sick. Nobody seems too concerned about this, so I think we can assume this is merely an upset stomach and not something life threatening. Burglekutt agrees, insisting the baby is just fine. He takes the baby from Willow and she spits up in his face for a cheap laugh. Willow says the baby will be fine after she gets some rest, while Vonhkar and one of the other village warriors wipe baby barf off of Burglekutt’s face.

Yeah, yeah, it’s wacky comedy. Because there’s nothing else to say about this scene, let’s instead take a deep, deep dive into the tie-in fiction and talk about the geography of this world. This planet is called Andowyne. The map of our heroes’ travels is laid out across four points. To the north is NockMaar (sometimes spelled Nockmar), the home of Bavmorda’s castle. To the west is Tir Asleen, which we’ll hear a lot about and even visit later in the movie. To the south is Galladoorn, which we’ll also learn a little about and we’ll meet some characters from there. To the west is the never-seen and hilariously-named Cashmere, described as both shadowy and also overflowing with great wealth. Willow’s village is located in the southeast, between Galladoorn and Tir Asleen. Near the center of the map is the fairy forest, home of Cherlindria and the setting for the movie’s big exposition scene. 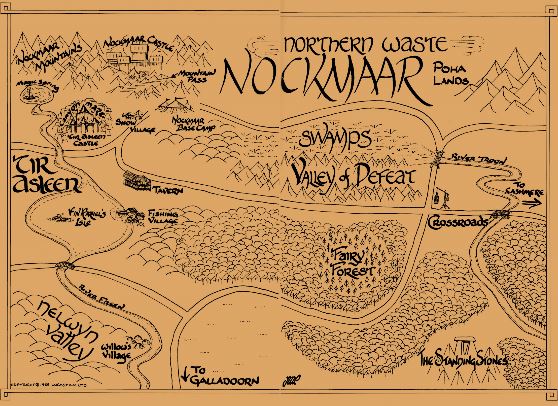 The map contains a few locales not seen in movie. In the northeast, you’ll find the Poha Lands, home of savage, animalistic Daikini called the Poha. To the southeast, there are the Standing Stones. These are a group of monoliths described as predating known history, with a lot of fantasy novel gibberish about elves and druids possibly having created them, and what magical properties they may or may not have. The swamps and the Valley of Defeat are a formerly lush area made poisonous and lifeless after Bavmorda destroyed them seeking rare nightstone granite to build her caste. Beyond this continent, outside the map, there are a few fleeting references to the Sunset Ocean, a massive body of water to the east. Across that sea there is the Western Continent, about which we know pretty much nothing. 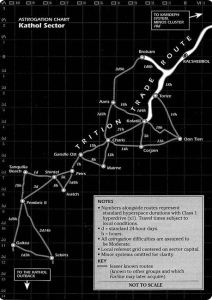 Pulling back even farther, we find ourselves in the Star Wars universe. No, really. A few years ago, StarWars.com revealed that Andowyne is a planet in Star Wars canon. Andowyne is located in the Kathol Rift, a nebula-like part of space known to cause hallucinations for those who enter it. The Kathol Rift is part of an even larger area of space that’s actually mentioned in the Star Wars movies, the Outer Rim — a wild, lawless, partially unexplored area of the galaxy. If all this isn’t upsetting enough for you, the site also stated that midichlorians are likely to exist on Willow’s planet. 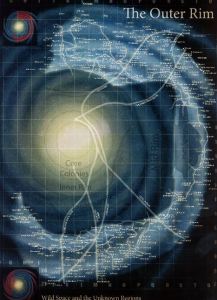 But wait, there’s more. StarWars.com later went back and stated that all this Willow/Andowyne stuff was merely an April Fool’s joke. However, this hasn’t stopped fan sites like Wookieepedia from including from Willow among all the Star Wars lore.

But wait, there’s MORE. In my research, I’ve come across another connection between Star Wars and Willow. During the festival scene in Willow novelization, the High Aldwin says, “The Great Mystery is the bloodstream of the universe, and sorcery is the way to its energy.” Compare that to Star Wars Episode III: Revenge of the Sith, when Palpatine says, “If one is to understand the Great Mystery, one must study all its aspects, not just the dogmatic, narrow view of the Jedi.” That can’t be a coincidence!!!

Now wasn’t all that more interesting than baby barf?