Fantastic Friday: Life is the bubbles

Reading the Fantastic Four comics from the start. I guess someone at Marvel decided the X-Men and the Avengers shouldn’t have all the fun when it came to the big crossover events, so here’s Starblast, a Namor/Quasar crossover that ran through 12 Marvel comics in 1994. Fantastic Four issue #385 is part 7 (!) of Starblast.

We begin with Ben and Sue overseeing reconstruction of Four Freedoms Plaza after part of it was destroyed during the Infinity War crossover. Sue gets a call from the Black Panther, who agrees with her belief that Reed isn’t really dead, and he says he’ll help in the search. Ben, meanwhile chases away a bunch of reporters asking about Reed’s disappearance. Johnny and new team member Scott Lang, a.k.a. Ant-Man, work on sprucing up the FF’s jet. Lyja, meanwhile, refuses the help of a human doctor, now that she has Skrull medicine to help with her pregnancy.

The FF then get a call from Namor the Sub-Mariner, who is now rocking an extreme ‘90s ponytail. He says there’s a dire emergency, but then cuts off the call after Johnny informs him of Reed’s death. Johnny investigates, and finds that Namor was calling about a series of anomalies threatening to knock the Earth off its axis. The largest of these is located at the mouth of the Amazon River and deep in the Marianas Trench, so the team flies off to check it out.

Johnny, Scott, and Lyja arrive at the Amazon in the FF’s “old bathysphere,” where they encounter the inhuman Triton and undersea supervillain Tiger Shark battling a tentacle sea monster. Everybody fights the monster, and drives it off. Tiger Shark reveals that his lover, an Atlantean named Tamara, was abducted by a “planetary thruster” at the bottom of the river. Ant-Man communicates with insects on the river bottom to help search for the thruster. 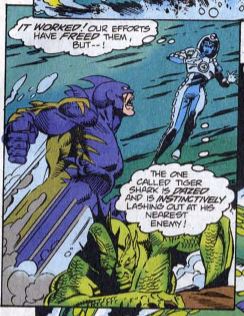 In the Marianas Trench, Sue and Ben meet up with Namor and undersea adventurer Stingray, in his civilian guise of Dr. Walter Newell. Namor offers his condolences to Sue, with some serious sexual tension going on between the two. Ben, meanwhile, finds that Namor and Stingray have captured a small alien creature and also brought it on board. 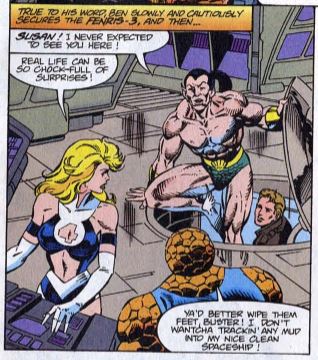 In the Amazon, the heroes fight their way past a giant tentacle monster to rescue Tamara. They then enact a plan to destroy the thruster with an implosion device. (Is an implosion device a bomb or not?) Lyja then doubles over with pain, feeling more complications from the pregnancy. Triton saves her by swimming her and Johnny away from the implosion at the last second.

On board the Stealth Hawk, Stingray explains what’s going on. An alien named Xylym the Formaluauti is using the thrusters to flood the entire earth, turning it into a water-only planet to be a new home for his people. Quasar is out in space, fighting Zylym and his henchmen, a group of space pirates called the Starblasters. Further, the tiny alien Namor brought on board is a mind-controlling symbiont (not symbiote) that attaches itself to a host’s brain. On cue, Ben shows up with the symbiont attached to him, threatening to kill everyone. 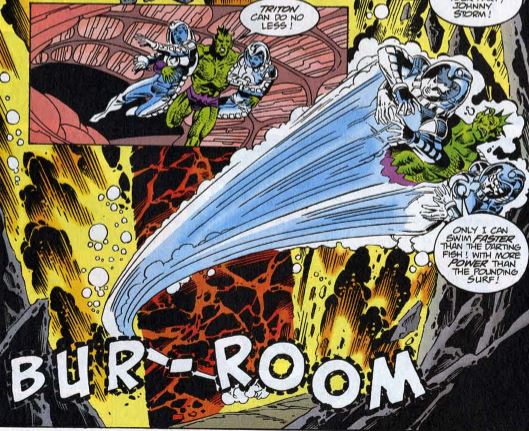 The action then picks up in Namor the Sub-Mariner #48, where Namor and Sue fight Ben and eventually free him of the symbiont, only for the Stealth Hawk to end up trapped in an underwater avalanche.

Fade out: Now freed of Malice’s presence, Sue regrets the way she’s been acting, and even comments about not liking her ridiculous new uniform. She continues to wear it though.

Clobberin’ time: There’s a scene where Ben stops by Alicia’s apartment, only to learn that she has moved and not left a new address. The last time we saw Alicia was when she met Lyja a few issues ago, but we never saw the outcome of that meeting. I guess it didn’t go well.

Flame on: Johnny has a special diving suit made of (what else?) unstable molecules, allowing him use his flames while underwater.

Fantastic fifth wheel: Sue orders Ant-Man to stay behind and work on the computer the FF swiped from Dr. Doom a while back, but he instead stows away in the bathysphere, after hearing Johnny talk about some of the FF’s grand adventures.

Four and a half: There are a few fleeting references to now-teenage Franklin having gone missing, after the Malice entity possessed him. No one seems in much of a hurry to find him.

The Alicia problem: Lyja’s pregnancy is a lot farther along than anyone though. It’s explained that, as a shapechanger, she’s not going to, er, show in the same way that human women do.

Commercial break: “The children are going to have to learn about Tek War sooner or later.”

Trivia time: Johnny refers to the FF’s bathysphere as “our old bathysphere.” I think this is meant to be a reference to the bathysphere the team took to Atlantis in issues #32-33, when they fought Attuma. There’s no explanation, of course, of how it survived the destruction of the original Baxter Building. Maybe Reed kept it off-site. The Marvel Wiki doesn’t have an entry on the bathysphere, but a quick search shows it is one of many bathyspheres running around the Marvel Universe.

Fantastic or frightful? Here we have a bunch of Marvel’s aquatic/undersea characters in one issue, which is a novelty. But other than that, there’s much else going on in this issue.