Reading the Fantastic Four comics from the start. In vol. 3 issue #9, Spider-Man stops by, along with one of his classic villains. Kraven the Hunter is the original tiger king. 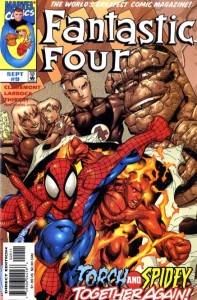 It’s morning at Pier 4, when Sue, still in her bathrobe, answers a knock on the door. There are two TV reporters there, saying they had an appointment to interview the FF for a documentary on the daily life of the superheroes. She takes off, only for Johnny and Ben to take over. After they horse around with the reporters for a bit, they pass them off to Reed. Ben, Johnny, Franklin, and family friend Alyssa Moy head out to Manhattan for some shopping. 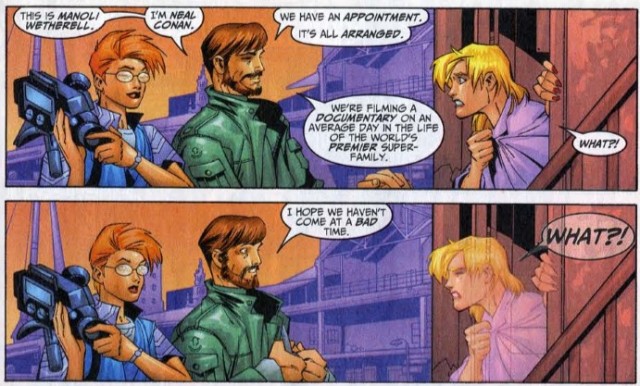 The gang walks through Tribeca, where they run into the one and only Stan Lee, who has a side gig cooking sausage at a sidewalk stand. They walk past the old Four Freedoms Plaza (was it always in Tribeca?) and there’s a lot of exposition-speak recapping the events of Onslaught, Heroes Reborn, and Heroes Return. Alyssa worries that the FF might disappear and leave Franklin alone again, while Ben says Four Freedoms Plaza is still abandoned after the Thunderbolts went on the run, and city has yet to determine whether the building is still sound. 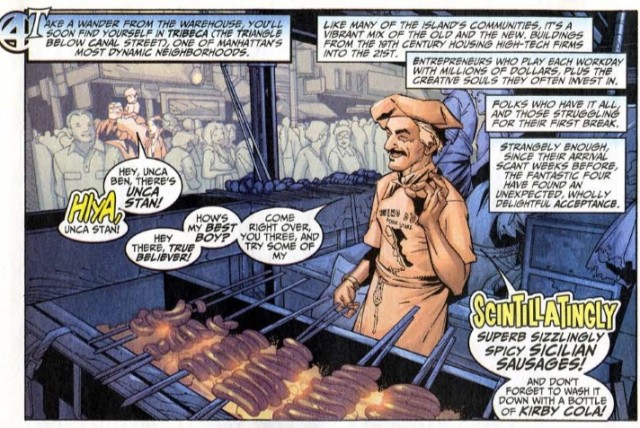 In the sewers under Four Freedoms Plaza, construction workers investigate a strange noise and come face-to-face with… Kraven the Hunter! He tells the workers to leave him alone, and that he will inform their bosses when the “threat has been eliminated.” 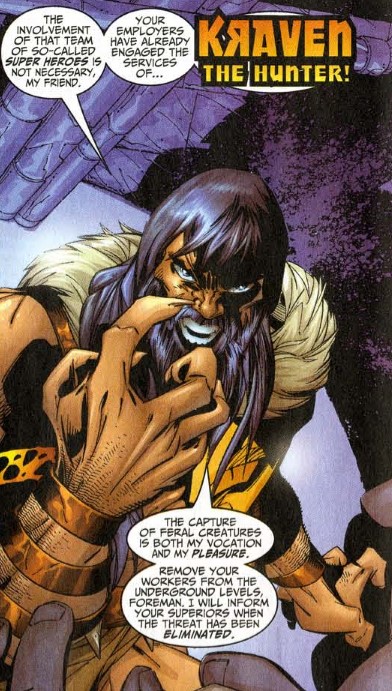 Back at Pier Four, there’s a lot of sitcom stuff with Johnny horsing around with the reporters, when Ben and company return with a bag of bagels for everyone. Then Sue is visited by NYC fashion designer Kay Cera (Marvel superfans will recognize her as “Cuckoo,” one of the Clan Destine) and her team to give Sue another makeover. 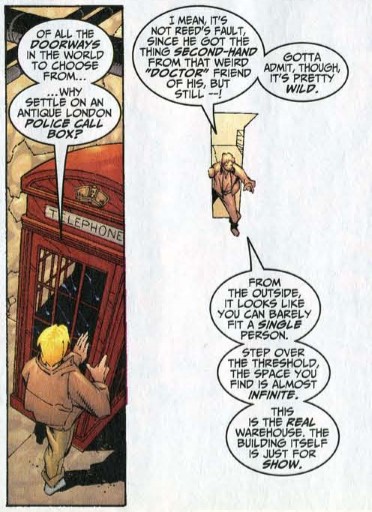 What happens next is a little hard to follow. Johnny sneaks away, and into an old-fashioned London phone booth, displayed as a novelty outside the pier. He steps inside, walks through a blank white void. He’s grabbed from behind and apparently pulled back to Earth by a knife-wielding woman. Johnny recognizes her as a woman he rescued from the Captain Britain Corps on Roma’s world in the last issue. (Don’t remember this from last time? This issue is this character’s first appearance. The flashback to the Captain Britains is a bona fide ret-con, as this is the character’s first appearance. Johnny said he couldn’t leave her behind in Roma’s world, so he brought her to Earth, and he’s working on finding her a place to stay. She can’t stay at the pier because Johnny hasn’t told her about Reed yet, but he says he’s come up with an alternative. Johnny then flies her to Four Freedoms Plaza, where they’re met by Spider-Man. 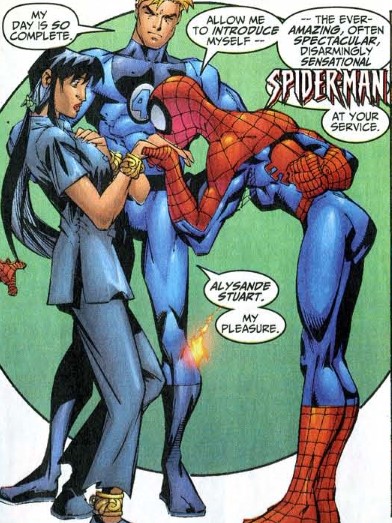 The mystery woman finally gives her name, Alysande Stuart. (Marvel fans no doubt remember another Alysande Stuart who was a main character in Excalibur for a while. That Alysande died in Excalibur #55, and this new one is an alternate universe version.) Spidey saw Johnny’s flame and thought they should have a proper reunion after Johnny came back from the dead in Heroes Return.

While Johnny and Spider-Man joke around, Alysande gets upset and runs off into the building. The two heroes follow her. There’s another short scene back at the pier with the interviewers, then it’s back to the former HQ, where Spider-Man finds Kraven the Hunter inside. Spidey refers to Kraven as “Alyosha,” revealing this is Alexei Kravinoff, mutant son of the original Kraven. He tells the heroes that they are not his prey, and he tells them to leave. Then Alysande says she is the protector of Kraven’s prey. Alysande strikes her knife to the ground which magically transforms her into an armor-clad warrior woman named Caledonia. 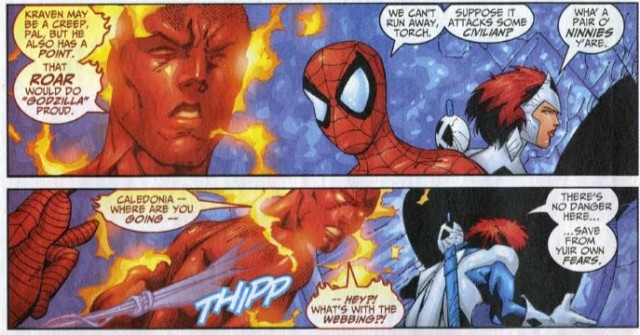 Johnny, Spider-Man and Caledonia all fight Kraven. Although outnumbered, Kraven puts up a good fight with a dart gun and a bunch of other hunting gadgets. A loud roar comes from deeper within the building, and everyone realizes there’s a dangerous animal nearby. Kraven runs off, saying he’ll come back for the beast after it is done killing the three heroes. Caledonia, however, marches ahead to confront the monster, saying there is nothing to be afraid of. 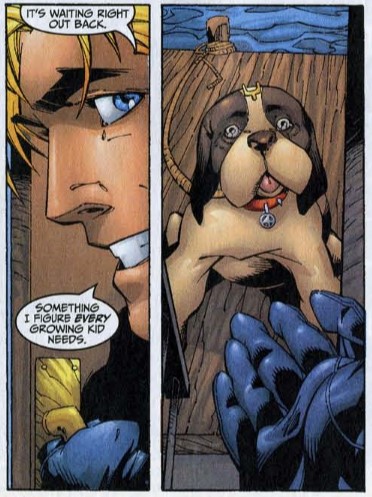 Back at the pier, the FF are wrapping up the interview, while Sue is once again concerned about Franklin being unprotected. Then Johnny, Spider-Man and Caledonia return with the monster. It’s an Inhuman dog, similar to Lockjaw, except smaller. Franklin and the dog immediately bond, and I guess this means he’s got someone watching his back now.

Unstable molecule: Reed had forgotten to tell the rest of FF he scheduled a TV interview that day, which is this issue’s only reference that Reed is acting out-of-character after his fight with Crucible in issue #5.

Fade out: Johnny is able to “see” Sue when she’s invisible, because he senses the natural ambient heat around her. This is a shout-out to comics from years earlier in which he did the same thing.

Clobberin’ time: When Ben is interviewed, he says he’s come to peace being a big rock monster, in that it’s given him opportunities he wouldn’t have had otherwise, including traveling to outer space.

Flame on: Johnny mentions that he’s officially certified as a New York firefighter after auditing a series of firefighting courses. He says learning about stopping fires has given him better control when starting them.

Four and a half: The opening recap page says Franklin’s powers have exhausted themselves for now. The concern, then, is worrying about his feelings of abandonment during Heroes Reborn/Heroes Return. We’ll learn more about his new pet next issue. 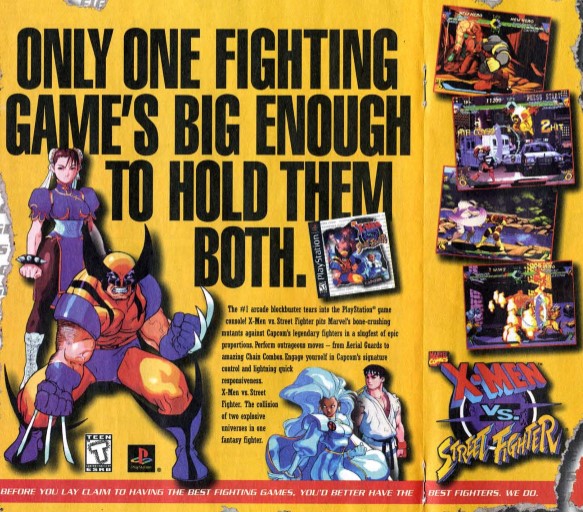 Trivia time: Johnny mentions that he recently ran into Spider-Man’s friend Hornet. What Johnny doesn’t know is that Hornet was an alternate hero persona used by Peter Parker during Spider-Man’s Identity Quest storyline. The other two personas were Ricochet and Dusk. The three personas were eventually handed over to three other guys for their own spinoff, Slingers.

The bit with the English phone booth goes unexplained. It’s obviously a reference to Doctor Who, but Marvel’s short-lived Doctor Who comic was its own timeline that never crossed over with the regular Marvel Universe. Johnny says the phone booth came from Reed’s “strange doctor friend,” which has some fans speculating it came from Dr. Strange instead.

The two reporters mention having met the X-Men. This occurred during the Fall of the Mutants crossover, when the X-Men seemingly died, only to hide out in Australia for a while.

Captain America can be seen on the FF’s TV in the background. I’m assuming this a hint at two big Cap events the month this was published. In Captain America Vol. 3 #9, Cap’s shield was replaced with his cool new energy shield (it didn’t last). This was also the month of Captain America: Sentinels of Liberty #1, which depicted a near-future Captain America.

The Marvel Wiki states that Stan Lee cameos are considered exempt from continuity, so we don’t have to bother figuring out what he’s doing cooking Sicilian sausages on the sidewalk.

Fantastic or frightful? I want to give writer Chris Claremont the benefit of the doubt, but this issue is a mess. The introduction of Alysandre/Caledonia is baffling. She just comes out of nowhere. Also, Kraven just runs away, and Spider-Man lets him go? That feels out of character for them both. I like that this is an attempt at a lighter, sitcom-ish story, but that’s about it.