Fantastic Friday: All the world’s a stage, and we’re merely puppets 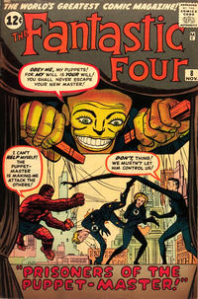 Re-reading the Fantastic Four comics from the start. Issue eight introduces one of the most important supporting characters in the comic’s history.

The story begins at FF headquarters, where Mr. Fantastic is not letting Ben inside the lab. Ben thinks this is because the other three think he’s beneath them. A fight breaks out, with Johnny and Reed trying to keep Ben out of the lab. Ben leaves, and Sue follows invisibly. Outside, a couple of guys make fun of Ben, only to have Sue and Ben knock them around a little. Then Sue spots a guy climbing a bridge about to jump. He’s apparently in some sort of trance. Sue signals the rest of the team, and Johnny saves the guy.

Elsewhere in the city, we meet the Puppet Master, who was controlling the would-be suicide via a tiny puppet (and a tiny version of the bridge, for completeness’ sake). We also meet Puppet Master’s blind stepdaughter, Alicia. Because she’s blind, she doesn’t know stepdad is playing with creepy dolls. The Puppet Master shoos her away, and we learn he creates his mind-controlling puppets out of “radioactive clay.” Why hasn’t this been a Mythbusters episode yet?

Puppet Master (Screw it, from now on I’m calling him P.M.) creates a puppet of Ben, and Ben feels compelled to go to P.M.’s apartment. Sue follows, but Alicia can tell that someone else in the room. She can sense Sue’s presence, but not radioactive puppets? P.M. gives himself, Sue and Ben gas masks, and then fills the room with gas, knocking Sue out and turns her visible. Alicia is fascinated with Ben, touching his face. She can sense his strength, but she also believes there is a deeper level of sensitivity within him.

P.M. then disguises Alicia as Sue, complete with a spare FF uniform and a blonde wig. (Where’d he get that?) Under P.M.’s control, Ben and Alicia sneak into FF headquarters. Another fight breaks out, and Ben finally sees what’s in the lab. Reed has developed a new chemical that can turn Ben back into a human. This undoes P.M.’s mind control. Alicia is afraid, but Ben calms her down. The chemical wears off, and he becomes the Thing again, learning that Alicia actually likes him more when he’s the monster.

Sue tries to escape from P.M.’s clutches. He stops her, but she manages to signal the group. The other three arrive, but P.M. is ready for them, siccing a giant robot puppet on them and then escaping on a winged horse puppet, which he says is his greatest creation. (How big is this apartment of his, anyway?) The pursuit is cut short when the team learns P.M. used his puppets to engineer a jailbreak. They take care of the escaping prisoners in several pages of awesome Jack Kirby action.

Alicia as back at her apartment, sad now that she knows her stepdad is evil. P.M. returns, saying he still hasn’t used his greatest puppet. (Wait… he just said the flying horse was his greatest puppet. Poor horsie.) It’s a “king” version of himself, which he plans to use to conquer all the world’s governments and make humanity his slaves. So why didn’t he just start with this puppet? Alicia tries to grab it from him. She falls, and he drops the puppet. As he reaches for it, he trips and falls out the nearest window. It’s then that the FF show up. Ben comforts Alicia, while Reed and Sue wonder what really made the P.M. fall. “I wonder if we’ll ever really know,” Reed says.

Fade Out: Sue literally kicks one of Ben’s hecklers in the butt. She doesn’t escape from P.M., but in her escape attempt she signals the rest of the team.

Clobberin’ Time: Ben comes off as an angry thug early on, but Alicia’s assessment of his great depth of character comes true when he comforts her at the end. He also takes out a whole bunch of the escaping prisoners, tearing apart prison walls and turning them into makeshift cages.

Flame On: While fighting Ben, Johnny debuts a new move, his “Roman candle punch.” You can bet I’ll be looking to see if that ever gets used again.

Trivia Time: Obviously, it’s our first appearance of Alicia, who’s going practically going to be a member of the family from here on out. The fact that she can pass as Sue is never mentioned after this.

The Puppet Master stays on as a major villain throughout the series run, if for no other reason than because he and Alicia are family. What, exactly, is the deal with his look? Between the arched eyebrows and the oversized lips, it seems like someone should be offended by his visage, but I don’t know who. (Actually, his origin was revealed in an early issue of Marvel Team-up. Too bad for you that this is a Fantastic Four re-read.)

Fantastic or Frightful: This is a great comic. It has a lot of action, suspense, and emotion. Each one of the four gets a moment of cool, and yet the finale comes down to Alicia versus her evil stepdad, which made for an unexpected twist. Great stuff all around.

Next week: Are you prepared for one of the goofiest, silliest stories in Fantastic Four history? Are you?