Fantastic Friday: Thing vs. Hulk, round one

Re-reading the Fantastic Four comics from the start. Issue 12 gives us the series’ first big guest star, and I do mean big.

Right on the first page, we’re dropped into some silver age silliness. Ben and Alicia are on a date, to the symphony. It’s not Ben’s style, and he’s his typical grumpy self. Then, out of nowhere, a company of U.S. army soldiers just happen to marching by, in the middle of New York, and they start a fight with Ben. They just happen to have a specially-prepared bazooka with them. It fires steel cables at Ben, temporarily trapping him. They then knock out Ben with some powerful sleeping gas.

An army captain calls off the fight, explaining that his men mistook Ben for the Hulk. Ben heads back to headquarters, and here, for the first time, we learn it’s named “The Baxter Building.” Yay! Ben is a grump because he doesn’t like being compared to the Hulk. Reed says this is good timing, because the FF have just received a call about the Hulk. General “Thunderbolt” Ross arrives, and says he wants the team’s help… to find and destroy the Hulk.

Debuting a sleek new design for the Fantasti-Car, the Fantastic Four and Ross fly to Ross’s base in the southwest, where Ross says the Hulk has destroyed a valuable new anti-missile system. Reed conferences with a wimpy scientist, Bruce Banner, troublemaking teen Rick Jones, and some guy named Karl Kort. Banner argues that the Hulk did not destroy the machine, but that it was a saboteur known only as the Wrecker. Kort leaves, drops his wallet, which Johnny picks up. Foreshadowing! Another fight breaks out between Ben and the army guys, for pretty much no reason whatsoever, after which Johnny gives Rick Jones Kort’s wallet.

Out in the desert, Rick meets with Banner, who’s upset because he can’t convince anyone that the Hulk is not the saboteur. From there, Rick goes to return Kort’s wallet. Peeking inside, he sees a card for a “subversive communist-front organization.” Kort is literally a card-carrying communist. Kort reveals he is really the Wrecker, and he takes Rick hostage.

Meanwhile, again for no reason, the Thing is testing out the army’s new rocket sled. Part of the track has been destroyed, and once again everyone suspects the Hulk. Banner tries to convince them that the Hulk is innocent, but, again, no one will believe him. So Banner has no choice but to retreat to the desert, to his secret lab, where he reluctantly douses himself with gamma rays and transforms into the Hulk. 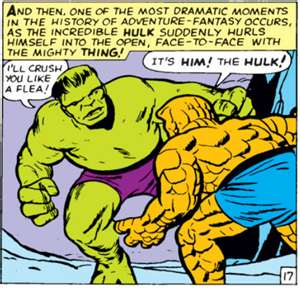 The Fantastic Four explore the underground caves beneath the rocket sled, and the Hulk is in those same caves. The Hulk and the Thing meet face-to-face, in what the caption describes as “one of the most dramatic moments in the history of adventure-fantasy.” Of course they fight, up through the caves, and to an abandoned Old West ghost town outside. The Hulk easily takes out Reed, Sue and Johnny, only to have the Thing slow him down with a “piledriver punch.” Only it wasn’t all Ben, but a beam from underground that also struck the Hulk. There, our heroes discover a giant robot, which the Wrecker used to frame the Hulk. Ben destroys the robot, and Sue, while invisible, disarms Kort and saves Rick. The Hulk flees, to go change back into Banner.

It’s a big happy ending as Reed and Banner shake hands and the soldiers salute the FF. Then, a day later, the Hulk is out in the desert swearing that this is not the last time they’ll meet.

Unstable Molecule: Reed’s role in this issue is mostly as an authority figure, as his smarts and reputation are what inspire the army to ask for his help.

Fade Out: She can’t fight the Hulk, but Sue makes quick work of the armed saboteur.

Clobberin’ Time: This episode is a showcase for Ben, as he first talks big about defeating the Hulk, and (with a little help) actually defeats the big green guy.

Flame On: In this issue, Johnny’s flames have a telekinetic quality, as they’re able to lift Kort’s wallet without burning it. He and fellow teen Rick Jones don’t quite along.

Trivia Time: This is the first time another Marvel hero guest stars in the Fantastic Four, although the FF made appearances in other comics, most famously Amazing Spider-Man #1.

This is also the first time the Hulk and the Thing fought each other. For many years, Thing/Hulk fights were always a major event whenever they’d happen in the comics. This is because the two were often depicted as equals in terms of physical strength. In recent times, though, Ben has been depowered somewhat, while the Hulk has been ridiculously strong, which is too bad. I miss getting excited about a Thing/Hulk slugfest.

This was Kort’s only appearance as the Wrecker. He’s not related to the guy of the same name from the Wrecking Crew.

The new Fantasti-Car debuts, as Reed explains that fans kept calling the previous one a “flying bathtub.” Sure enough, “flying bathtub” would go on to be the unofficial name for the original Fantasti-Car, as it still gets used many times in future comics.

Fantastic or Frightful: There are some silly parts here and there, but overall this is a really great issue. The mystery of the Wrecker is pretty obvious, but the long buildup to the fight against the Hulk works great. The threat and menace of ol’ Greenskin makes the issue an exciting read.