A while back, I spent a whopping $5 on this 50-movie set, Sci-fi Invasion. That adds up to 10 cents per movie. 1968’s Night Fright suffers from a severe lack of Jerry Dandrige. 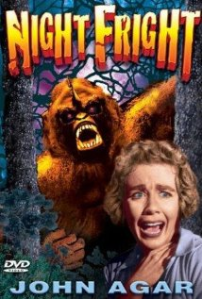 Speculative spectacle: Spoiler! It’s revealed that the killer is an ape, turned into a monster by a sinister NASA experiment. Just like Murders in the Rue Morgue, except it’s crap.

Quantum quotables: “Did you ever see anything as bad in your life as the way that little girl was chewed up? There wasn’t even enough of her face left to identify.” – A good ol’ boy cop, telling us about the gore instead of showing us. 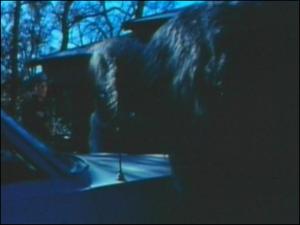 What the felgercarb? When we finally get a look at the monster, it’s so dark that we can’t tell what we’re looking at. What does it look like? All I can tell you is, it’s kind of hairy.

Microcosmic minutiae: The makeout point in this movie is named “Satan’s Hollow.” That’s also the name of the classic video arcade game prominently featured in the ‘80s cult comedy Joysticks. (Yeah, let’s see you try to come up with trivia for this one.)

Worth 10 cents? Absolutely not.