Re-reading the Fantastic Four comics from the start. Issue number 13 is the most dated from this era, but in many ways, it’s also one of the most exciting. It’s all about evil soviets and their apes, the great space race, and some seriously great art. 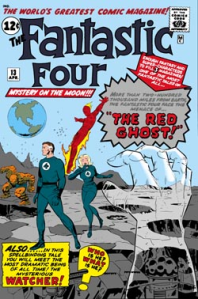 The issue begins with an explosion in Reed’s lab and HOLY CRAP STEVE DITKO IS INKING JACK KIRBY’S PENCILS. Ditko is of course a comics legend for his work with Stan Lee on Amazing Spider-Man, which ran concurrent to these issues of Fantastic Four. How and why he filled with the inking on this issue I’ll never know, but the melding of the two artists’ styles is fascinating. Kirby drew big, larger than life action, while Ditko’s work was quirkier, sometimes more focused on character work and expressions. You’d think they’d be too different to work together, but in this case the results are impressive. Under Ditko’s inks, Ben looks more monstrous than usual, with black shadows around his eyes, and Sue looks especially gorgeous.

But why analyze art when there are communists? Wait… make that communist APES. The issue begins with Reed experimenting with a new type of rocket fuel, which he says will allow the U.S. to be the first to the moon, before those pesky Russians get there. Meanwhile, behind the iron curtain, the sinister Ivan Kragoff has trained a bunch of apes to be his cosmonaut crew. A gorilla is the pilot, a baboon has been trained to fire a machine gun, and an orangutan is the mechanic, able to “fix anything,” Kragoff says. (Why are these apes better than a human crew? That’s never explained.)

Both the FF and Kragoff take off in their spaceships at the same time, making the space race literal. While the FF’s ship has extra-special protection against the cosmic rays that gave them their powers, Kragoff and the apes are in a special see-through ship, allowing them added exposure to the cosmic rays. They get zapped, and Kragoff and the apes gain powers. The orangutan can manipulate magnetic waves, the baboon is a shape-changer, and the gorilla has superhuman, er, superape strength.

Both ships land on the mysterious “blue area” of the moon, finding an abandoned city there, a remnant of a long-since-dead alien society. There’s breathable air in the blue area, and the alien machinery is still operable. The FF splits up, and Ben runs into the apes. They fight, and Kragoff reappears, revealing that the cosmic rays gave him the power to turn intangible and walk through walls. He now calls himself the Red Ghost.

The fight is interrupted by a huge, bald alien, who introduces himself as the Watcher. The Watcher is just that, one who watched the galaxy from afar, but never interfering. He says the conflict between the U.S. and Russia will soon explode into full-blown war that will destroy the Earth, and he refuses to let the conflict spill over onto his home on the moon. He intends to settle the matter right then and there by having the Fantastic Four and the soviets fight it out in the dead city. The apes easily defeat Reed, Johnny and Ben, and Sue is taken captive. The Red Ghost explains to Sue that the apes are under his mental control.

The Red Ghost none-two-wisely leaves Sue alone with the apes while he runs off to set up a trap for her teammates. She sets them free, both from their cage and from the Red Ghost’s mind control. Sue then rejoins the others, warning them of the Red Ghost’s trap, a deadly laser. Johnny and Sue take out the laser. The Red Ghost escapes, and comes across the Watcher’s house. He sneaks inside, hoping to use the Watcher’s advanced alien tech for his own uses. Instead, the interior of the Watcher’s home is so far-out and otherworldly that it nearly drives the Red Ghost mad. The Watcher threatens a series of time travel-based punishments, but instead just tosses the Red Ghost out of the house.

The Watcher declares the Fantastic Four the winners, and says that no matter how far humans travel in space, they will never be alone. Freed from the Red Ghost’s mind control, the apes turn on their former master and chase him off across the lunar surface. Reed and company leave him there and return to Earth, promising to turn the new fuel source over to the National Space Agency. (Why didn’t they just that to begin with?)

Unstable Molecule: Reed invents a new source of rocket fuel from a meteorite. He also debuts a stretchable asbestos suit for his work with dangerous materials in the lab.

Fade Out: At first, I cringed at the sight of Sue being taken captive again, but then she turned the table on her captor, freeing the apes from his mind control and rescuing her teammates from the Red Ghost’s deadly laser.

Clobberin’ Time: Ben is in a jovial mood in this issue, making comedic wisecracks the whole time. It’s interesting that the Watcher chooses to appear first before Ben, and not Reed.

Flame On: Johnny’s environmental suit also uses asbestos. (Lots of asbestos in this issue.) To catch up to the Red Ghost, Reed at one point puts Johnny inside a metal tube and has Johnny use his flame as a human jet engine. Nice.

Trivia Time: It’s the first appearance of the Watcher, who will go on to be a major part of Marvel lore. He has a habit of always showing up just before really, really bad things happen. This issue ends with him saying that he’ll leave for another galaxy, but it’s later established that he and his crazy home in the blue area aren’t going anywhere.

The blue area of the moon is another fun Marvel oddity, allowing Marvel characters to visit the moon anytime they want without the need for spacesuits. It later becomes a permanent home to the Inhumans, but we’ll get to them in this re-read soon enough.

Fantastic or Frightful: All the references to communism and the space race date the issue and make it unintentionally hilarious. Add apes into the mix, and you’ve got a wonderfully weird tale. The “space opera” aspects of the story are great fun, though, with a sense of exploration and wonder with the Watcher and the alien city. Let’s not forget that the Kirby/Ditko combo art is to die for. This issue is why we love Silver Age Marvel.

Next week: More mind control, and another super-villain team-up.