A while back, I spent a whopping $5 on this 50-movie set, Sci-fi Invasion. That adds up to 10 cents per movie. Today, we’re watching It’s Alive. No, this isn’t the infamous 1974 evil mutant baby movie. This one was made in 1968 and combines two B-movie staples, the giant monster and the evil hillbilly.

Here’s what happens: A young couple runs out of gas while driving across the country. I guess no one was home down at the Frankenstein place, so they instead end up at this backwoods farmer’s home. He traps them and a visiting paleontologist (!) in an underground cavern beneath his property, where a nasty surprise is waiting.

Speculative spectacle: Said nasty surprise is a giant aquatic dinosaur, lurking in an underground lake. After a long, tense build-up to the reveal, it turns out to be a clunky rubber-suit monster of the schlockiest kind.

Sleaze factor: The husband character must have been taking “Be a jerk to your wife lessons,” as he constantly berates her for wanting to drive across the country instead of fly.

Quantum quotables: Paleontologist: “Just for one second, try to think like a scientist. Do you realize the value of your discovery for mankind?” Hillbilly: “Mankind? What do I care about mankind?” 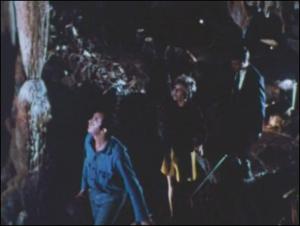 What the felgercarb? Near the end of the movie, there’s a flashback scene where the evil hillbilly chases a woman through the woods. The whole chase is in slow-motion, and it goes on FOREVER.

Microcosmic minutiae: The rubber monster suit used in this movie is the exact same one used in the 1967 horror flick Creature of Destruction, from the same director.

Worth 10 cents? The monster is worth the dime, but it only appears in two short scenes, so keep your finger on the fast forward button.