A while back, I bought this 50-movie set, Sci-Fi Invasion, for five bucks. That adds up to ten cents per movie. The Crater Lake Monster, made in 1977, is yet another entry in the “small town lake has its own version of the Loch Ness Monster” subgenre. 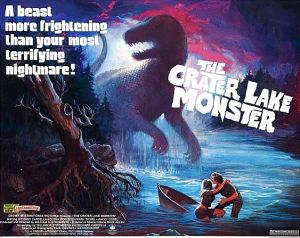 Here’s what happens: A meteor hits a small town lake, hatching the long-unhatched prehistoric egg down there. The resulting monster kills folks, and only the local sheriff and a couple of hillbillies can stop it.

Speculative spectacle: Supposedly, the creature is a plesiosaur. Paleontologists, email your cries of scientific inaccuracy to the filmmakers, and not to me. 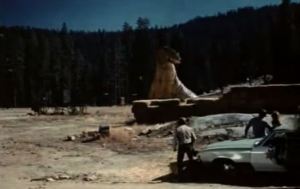 Sleaze factor: A couple of pervy guys peek at a waitress’s butt as she walks by, but they do it in perfect unison. What kinds of creeps choreograph their peeping Tom-isms ahead of time?

Quantum quotables: “Look at the stars. I’ve never seen so many,” says a woman, during broad daylight.

What the felgercarb? Two of the monster’s victims are a pair of showbiz types who just happen to be driving through town… on their way to Vegas. Taking the scenic route, maybe?

Microcosmic minutiae: The monster is created through stop motion animation by David W. Allen. Allen got his start on the low-budget thriller Equinox, and went on to craft special effects for cheapies like Laserblast and Planet of the Dinosaurs. From there, he went on to major Hollywood productions like Young Sherlock Holmes and Batteries Not Included.