Reading the Fantastic Four comics from the start. With issue #39, we’re in the middle of a run of issues that are serialized, so prepare for cliffhangers and recaps. At the end of the last issue, after their fight with the Frightful Four, our heroes were caught in a mysterious “Q-bomb” explosion, which seems to have had strange effects on them. 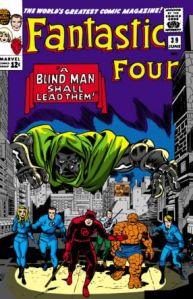 The issue begins out at sea, with a submarine crew rescuing a still-unconscious Fantastic Four, noting that the Thing has become an ordinary human. Aboard the sub, Reed stirs, flashing back to the end of last issue. As the four are revived, what the readers have already figured out becomes evident to our heroes – they’ve lost their powers.

Back at home, Reed dives into research, although finding a way to restore everyone’s powers seems fruitless. Days later, Reed has come up with an alternate solution. He’s invented suits for Sue and Johnny that mimic their powers. He then creates a Thing lookalike robot that Ben can operate with remote control. This leads to some slapstick, as the robot isn’t so easy to manage, and it knocks down a few walls. Reed says all this work is to prevent the FF’s enemies from learning they are powerless. 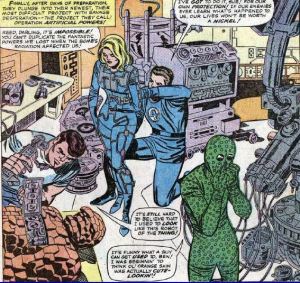 On cue, we cut to Latveria, where Dr. Doom is sitting on his throne being entertained by a hypnotist. Sure, why not? This guy is so good, he can tell that Doom’s mind has been messed with, and that he still believes he defeated the FF back in annual #2. The hypnotist undoes the mental block. Doom remembers what happens, and he is pissed off. He takes off in a goofy-looking “gyroscopic flying machine of his own design,” in search of revenge. 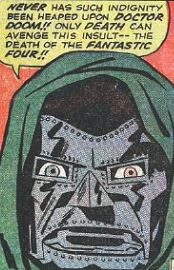 Back in New York, blind attorney Matt Murdock shows up at the Baxter Building, wondering why the FF called him there. Reed, who has built an exoskeleton to stimulate his stretching, says he wants Murdock to have power of attorney in case something happens to them. Murdock can sense something is wrong with the team, but he’s not sure what. Before he can ponder this further, the building is rocked with an explosion. The FF uses their faux powers to escape the wreckage, with mixed results. Murdock, meanwhile, ducks around a corner and dons his red costume, changing into Daredevil, the man without fear! 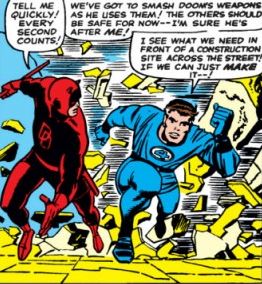 The lights are knocked out, but this is of course no problem for DD, who leads the Fantastic Four to safety through the dark. Sure enough, Dr. Doom is behind the attack. Daredevil quickly deduces that the FF has no powers, and he agrees to keep helping them. Things get worse as Doom takes over the Baxter Building, with our heroes on the outside. Doom hijacks the FantastiCar and sends it after our heroes by remote control. Daredevil helps them out with his sharp reflexes and quick thinking. Doom then pulls out a vortex machine, using it to destroy buildings all over the city. Daredevil and the FF are on the run, being pursued by the vortex. Reed and Daredevil use some convenient gas canisters to destroy the vortex.

Doom is next to figure out his enemies have no powers. He sends more high-tech weapons after them. Daredevil helps save everyone, but they’re separated, and spread out among the city. The issue ends with our four heroes on their own and under fire in the streets of New York, while Daredevil heads straight toward Doom to confront him. To be continued! 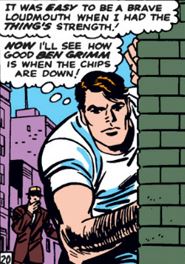 Unstable molecule: Even without his powers, Reed manages to help out with his brains, outsmarting Doom as best he can.

Fade out: Sue’s invisibility suit doesn’t work very well, as everyone can still sort-of see her, and trying to generate a force field shorts it out.

Clobberin’ time: Ben hardly reacts to being human again, desperately wanting his powers back. The issue tells us that this is because the FF are now vulnerable to attack, but this also speaks to how accustomed he has gotten to the new him.

Flame on: Johnny’s flame suit works best out of all the power replacements, but it doesn’t last long in the rubble after the big explosion.

Trivia time: This is actually not the first time the FF have met Daredevil. In Daredevil #2, Matt Murdock became the team’s personal attorney after Daredevil helped them in a fight against the evil Electro.

Fantastic or frightful: I’m a sucker for “superheroes temporarily lose their powers” stories, because they’re usually character-driven, as the heroes are forced to deal with change and think on their feet. Having Daredevil here cheapens that somewhat, as he does the team’s fighting for them, but this is still a great, suspenseful, “how will they get out of this one?” issue.