A while back, I bought this 50-movie set, Sci-Fi Invasion, for five bucks. That adds up to ten cents per movie. Time for some martial arts action with 1976’s Death Machines. 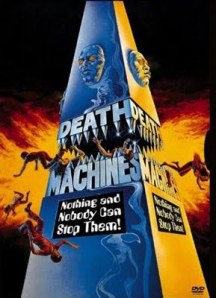 Here’s what happens: A sinister crimelord has a group of mindless killers at his disposal, which he uses as assassins. For reasons not clear to me, he has them attack a prestigious martial arts school, where they kill all but one person. After recovering, the survivor goes on the hunt for revenge. 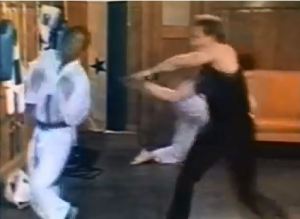 Speculative spectacle: Our hero got his hand cut off during the attack, and has to re-learn how to fight. This also gives him a good reason for the ol’ righteous vengeance. Before that can happen, though, we’ve got a romantic subplot, a subplot with a bunch of cops, a kidnapping subplot – subplots everywhere, basically. 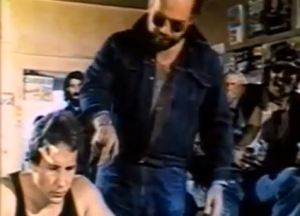 What the felgercarb? The movie screeches to a halt halfway through for an extended scene in which the psycho killers beat up some unruly bikers in a diner. Who is the main character in this movie?

Microcosmic minutiae: All twelve discs on this Sci-Fi Invasion set have the same music on the menu screens, this weird, screechy synth tune. Turns out that annoying music is the main theme from Death Machines. Composer Don Hulette, you haunt my nightmares. 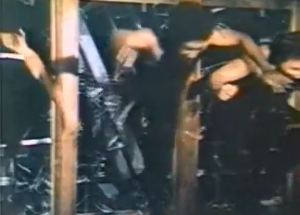 Worth ten cents? There’s a lot of fighting and craziness, but it’s so and overstuffed with needless characters and subplots that it’s just one big mess. Skip it.