Re-reading the Fantastic Four comics from the start. Issue #43 is the conclusion to this long-winded multi-part tale, in which the FF are in danger of splitting up, and the Frightful Four take advantage. When we last left our heroes, both Ben and Johnny had been exposed to the Frightful Four’s “id machine,” and turned evil. Now, Reed and Sue are on the run from both the bad guys and their former teammates. The issue is titled, “Lo, there shall be an ending.” Why don’t people start sentences with “Lo” anymore? 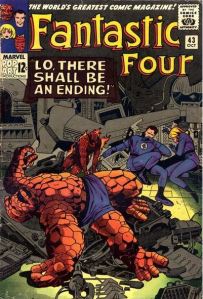 On the run from the Frightful Four – the Wizard, Medusa, Sandman, and the Trapster a.k.a. Paste-Pot Pete – Reed uses the Wizard’s anti-grav tech against them. Reed and Sue escape with Ben, who can’t fight back while weightless. The Frightful Four bicker amongst each other, with them blaming Johnny for letting the heroes escape.

Reed and Sue return to the Baxter Building with Ben, who starts smashing up the place in his anger. There’s a page of him fighting Reed and Sue until Reed traps Ben in an experimental, escape-proof lab. To undo the damage of the id machine, Reed says he must tamper with Ben’s brain. 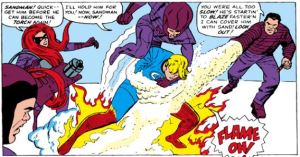 Back at the Frightful Four’s mansion, Medusa deduces that Johnny has been faking his loyalty to the Wizard, and, sure enough, the Wizard discovers the id machine damaged. Another fight breaks out, and it looks like Johnny might escape, but the Trapster knocks him out with a “miniature resonance cap,” which has the power of dynamite. (Sure, why not?)

From there, we get a couple of pages of Reed doing the mad scientist thing, devising some seriously cool-looking Jack Kirby tech. He hooks it up to the unconscious Ben. Reed’s new invention starts to work, but Ben wakes up and starts to destroy it. Ben is bathed in dangerous radiation, and Reed nearly dies absorbing some of it from him, before Sue pulls the main power switch, shutting everything down. Ben is out cold again, and only time will tell if he’s healed. 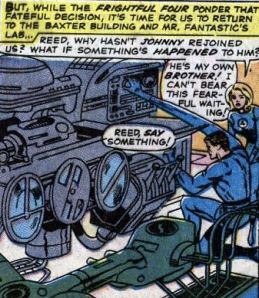 Subplot! Abruptly, we’re next taken to Latveria, where Dr. Doom is still fretting over his hands being injured in issue #40. He swears revenge (of course), and he mentions his new invention, an emotion changer. Just like that, the scene ends and we go back to the story proper. What’s this all about? The emotion changer bit is a reference to FF annual #3, on sale the same month as this issue. We’ll get to that one soon enough.

At the Baxter Building, the Frightful Four arrive in their personal flying saucer. (Again, why not?) The Frightful Four sneak inside, and reveal to Reed and Sue that they have Johnny held hostage on a giant anti-grav disc floating outside the building. Instead of surrendering, Reed calls for “Plan R,” which is apparently code for “Hit Medusa with a force field, Sue.”  She does, but it doesn’t slow down the enemies. Just as it looks like Reed and Sue are outnumbered, Ben comes out of his slumber and crushes the Wizard’s high-tech armor. This frees Johnny, who flames on and rejoins the battle. This turns the tide, as Sandman and the Trapster immediately surrender. 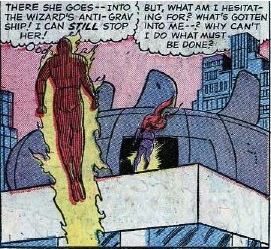 Medusa flees the building, and Johnny pursues. Just as he’s about to apprehend her, he hesitates. This gives her enough time to get back into the flying saucer and take off with it. Johnny says he can’t explain why he let her go, but Reed figures it’s because Medusa is so beautiful and Johnny is, well, Johnny. Then there’s a humorous bit where Reed calls the police and tells them he’s captured the Frightful Four, but the cops don’t believe him. 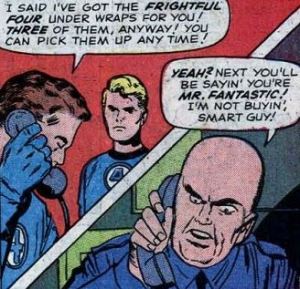 Unstable molecule: Reed whips up a huge, crazy-looking, brain-unwashing machine in his lab in no time.

Fade out: Sue and Medusa are evenly matched. Every time Sue deals a blow, Medusa fights back.

Clobberin’ time: Ben takes out the Wizard, which pretty takes down the entire Frightful Four. The resolution is interesting. Apologies are spoken, but the status quo is the same. The frustrations that led Ben to quit the team to begin with are still there, so there can be further stories down the line as Reed searches, and often fails, for Ben’s cure.

Flame on: Johnny was only faking joining the Frightful Four, but he doesn’t do much while undercover, and the baddies see through the ruse pretty quick.

Trivia time: With Medusa’s departure, this is the last time we get a story with the original Frightful Four. Their membership will feature a variety of Marvel B-list villains following this.

Fantastic or frightful? The big multi-part tale ends without any big brawls or cosmic wonders. It’s kind of low-key, considering all the craziness that led up to it. Maybe that’s intentional, though, as Stan Lee and Jack Kirby were always looking for ways to keep readers off guard. (Also, Galactus is coming!)