Re-reading the Fantastic Four comics from the start. At the end of the last issue, the FF were getting their butts kicked by Gorgon as they tried to protect Medusa, who had come to them for help. We left things off after Dragon Man showed up randomly and flew off with Sue, while Gorgon destroyed the building our heroes were in. That brings us to issue #45, the first appearances of a whole bunch of characters.

It should come to no surprise that Reed, Ben and Johnny survive the collapsing building. Their doing so gives us this issue’s excuse-for-the-characters-to-show-off-their-powers-for-a-few-pages thing. Johnny catches up to the escaping Dragon Man and blasts the big monster with a “near-nova” attack. This doesn’t hurt Dragon Man, but blinds him, like staring into the sun. Sue urges Johnny not to attack again, saying she can handle Dragon Man herself.

From there we get one page of Medusa’s former partners in the Frightful Four, Sandman and Paste-Pot-Pete, um, I mean the Trapster. They’re cellmates in a high-tech jail they can’t get out of, and they wonder why Medusa hasn’t shown up to spring them. (No idea why this scene is here. Spoiler: This is the last time we’ll see these two guys during this arc.)

Back at FF headquarters, Sue and Johnny return and are reunited with Reed and Ben, along with a now tame and docile Dragon Man. Sue says Dragon Man has the mentality of a child, and doesn’t actually want to hurt anyone. With that, the adventure appears to be over. I had to go back to the first page and re-read the caption to learn that Gorgon succeeded in capturing Medusa and making his escape with her. Odd that we didn’t get to see that.

Cut to later, as Johnny hangs out around headquarters, bored. He calls his love interest Dorrie Evans, only to have her tell him she’s got a date with some other guy (“I always thought there was something very strange about that chick!” Johnny says.) Dressed in civilian clothes, Johnny goes for a walk through Midtown Manhattan. In a deserted neighborhood (in Midtown?!?), Johnny comes across a beautiful girl, the most beautiful girl he says he’s ever seen, and she looks terrified. He tries to talk to her, but a gust of wind appears out of nowhere, and she disappears with it. 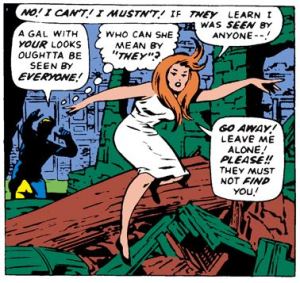 The next day, everybody’s in Reed’s lab, clearing out a space for Dragon Man, who I guess is moving in. Johnny is distracted, and he and Ben bicker for a bit (as they are known to do), so Johnny heads back out into the city to try to find his mysterious dream girl. In the “desolate neighborhood,” (which is located in Midtown Manhattan, let’s not forget) he finds her. She runs from him, and piles of wood catch on fire as she steps on them. This is no big deal for Johnny, as he shows her he can control the flame. “You’re one of us!” the girl says. She introduces herself – her name is Crystal.

Just as Crystal and Johnny start to get to know one another, a gigantic, ugly-ass dog appears behind Johnny. It’s about the size of a car. This is Lockjaw, Crystal’s friend and companion. Lockjaw uses his antennae (he also has antennae) to open a secret underground passage. Crystal leads Johnny down it, making numerous references to someone named Black Bolt, a person of great power and authority. Crystal announces that she is an Inhuman. Johnny immediately deduces that “Inhuman” means something completely different than “mutant,” dispelling any fanboy hopes that the X-Men will show up.

At headquarters, Dragon Man is acting up, and he and Ben start to fight. Reed breaks them up and Sue knocks out Dragon Man with a tranquilizer. Sue insists that Dragon Man is innocent and shouldn’t be treated like a monster. Ben then does the self-pity thing, thinking that’s how Alicia must feel about him.

Back the secret underground, Crystal introduces Johnny to another Inhuman, Karnak, an expert hand-to-hand fighter who can find the weakness in any structure, and a mysterious cloaked fellow named Triton, whose face we don’t see. But look who else is here – it’s Gorgon and Medusa. “It all makes sense now!” Johnny says. (It does?) The gist of it is that Medusa is an Inhuman who fled, and now the rest of them want her back, or something. Triton, still keeping his face hidden, traps Johnny in a glass cage and starts filling it with water. Mere glass can’t hold the Human Torch, and Johnny escapes both the trap and the underground lair with ease. He signals his teammates.

Reed, Sue and Johnny rush to the scene in Reed’s newest invention, an airjet-cycle. We get a great full-page splash of the cycle flying through the air, with a hilarious riff on the classic “It’s a bird/It’s a plane,” thing:

Johnny leads his teammates back to the entrance to the Inhumans’ lair, where the Inhumans have set up a trap for them. Karnak and Gorgon attack, knocking our heroes around a little. Ben brags that there’s nothing the Inhumans have that can stop the FF, at which point Karnak says “The time has come!” and he calls for Black Bolt. The last panel is the first appearance of the mysterious Black Bolt, smashing through a wall.

Unstable molecule: Reed blocks one of Dragon Man’s blows by stretching himself into a cube shape. He says this evenly distributed the impact of Dragon Man’s punch. Any physicists out there want to take a crack at nitpicking this one?

Fade out: Sue, ever the heart of the group, decides that Dragon Man should stay at the Baxter Building, and all the big fella really needs is a good home.

Clobberin’ time: Ben thinks some dark, dark thoughts. In his mind, he says he’s going to give up trying to be human again. “Ben Grimm is dead!! Long live the Thing!” he thinks. Dang.

Flame on: This whole is issue a showcase for the Torch, first with him using flame to blind rather than burn Dragon Man. Then, we get his determination to find and help Crystal, and his refreshingly easy escape from the Inhumans. I like this because it shows that despite his being the young kid of the team, he’s no slouch.

Trivia time: Lots of first appearances, most notably Crystal, who’s going to be a major player in the series from here on. Karnak, Triton (sort of) and Black Bolt all debut, as does the concept of “Inhuman,” something Stan Lee and the other Marvel writers will have a lot of fun with following this. As we’ll see, the Inhumans have a crazy background and mythology that’s all their own.

The name “Karnak” comes from a series of ruins in Egypt, dating back to the Middle Period, during the reign of Sesostris I (but you knew that already, didn’t you?). The name was also used for Ozymandias’s arctic hideout in Watchmen, and, of course, for a long-running Johnny Carson sketch:

“Sis Boom Bah.” (opens envelope) “Describe the sound made when a sheep explodes.”

Fantastic or frightful: Goofy comic-book logic aside, this is a fun issue. It has a ton of interesting character moments, and it sets up a lot of mystery surrounding the Inhumans, so much that you can’t wait to read the next issue. Good stuff all around. (Also, don’t forget: Galactus is coming.)