Fantastic Friday: Wakanda is lovely in the springtime

Rereading the Fantastic Four comics from the start. The folks at Marvel started bringing diversity into the comics in a big way in the mid-60s, illustrated by issue #52’s introduction of a black superhero, the noble Black Panther.

We begin with the FF in a futuristic flying car, zipping over NYC. Only this isn’t the Fantasticar, it’s a high-tech gift from the Black Panther, king of the African nation of Wakanda. Interesting that instead of being a mystery for the FF to solve, the Panther is already a public figure, and everyone (except the reader) already knows who he is. On the roof of the Baxter Building, the Panther’s ambassador greets the FF. Using “cosmic channel waves,” the ambassador sends a message to Wakanda, saying the FF will soon visit. The Black Panther appears, and there’s ominous talk about a hunt.

We check in with Johnny, who’s living in the dorms at Metro College, still pining away for his one-time love, Crystal. His team members pay him a surprise visit and they head to Wakanda. Johnny’s roommate, the musclebound Wyatt Wingfoot, sleeps the whole time. We then check in with Crystal and her people, the Inhumans, with their hidden refuge still trapped inside a giant dome, cut away from the rest of civilization. They still can’t escape, and Crystal longs for Johnny just as much he longs for her.

In Wakanda, the FF’s ship arrives to find high-tech paradise hidden away in the African jungle. We’re told that the entire jungle is man-made and that it hums with the power of computer dynamos. Then, for apparently no reason, the Black Panther attacks. As fast an agile as his namesake, the FF can’t get ahold of him, and he leads them into a trap, sealing them up in a big cage. Wyatt’s still with the group, and he figures that the entire cage is booby trapped. He knows this, he says, because the blood of the world’s greatest trackers flows in his veins. 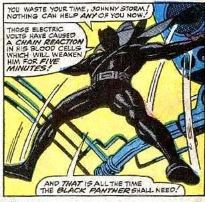 Our heroes don’t have time to even try to escape, because the Wakandans attack with polarity guns, separating the FF. Then it’s several pages of the FF getting chased around. The Panther is so sharp he’s able to listen closely and tell where Sue is even though she’s invisible. Then he takes on Ben, using a freezing machine to stop him. The Panther attacks Reed next, only to have Reed fall into another trap, getting tangled up in the Panther’s machines. Johnny rescues Reed, explaining that Wyatt freed him from his cage. (During all the action, there was a bit where Wyatt snuck around and caught the Wakandans secretly recording the fight.) Although the Panther prepared for the FF, he hadn’t considered what an ordinary human could do.

The Black Panther unmasks, saying the mask is not to conceal his identity, but it instead acts as a symbol. The whole fight, he says, was merely a game. He promises to explain more and…

Unstable molecule: Reed fails to capture the Black Panther by doing that thing where he turns his arm into a lasso. Has that ever worked?

Fade out: Sue’s limitations are revealed, when she can’t be perfectly silent while invisible, and she can’t create a force field fast enough, trapping the Black Panther inside it with her. That’s never happened before.

Clobberin’ time: Ben’s short temper is in full effect in this one. His response to every problem is punch the crap out of everything.

Flame on: Johnny is the first one taken out of the fight, but then, with Wyatt’s help, he puts an end to the fight.

Trivia time: Yes, it’s the first appearance of the Black Panther, often credited as the first black superhero. According to most reports I’ve read, this issue predates the real-life Black Panther movement of the 1960s by just a few months. It appears that one is not named after the other.

Fantastic or frightful: For what’s often described as a historic issue, not a lot happens. They go to Wakanda, everybody fights, and the cliffhanger is the promise as to why they were fighting. Kirby’s action-packed artwork is a delight, but the plot is surprisingly thin.

Next: Chillin’ with T’Challa.