What’s goin’ down: Somebody’s been sneaking around the high school at night, stealing equipment, vandalizing the hallways, and leaving behind creepy stalker roses for a good-looking teacher. Hanson is sent in to investigate.

Here’s Hanson: Hanson totally puts the moves on a beautiful woman who helps him with a flat tire. Later, he learns she’s the teacher being stalked, and he’s in her class. Awkward! But, he still keeps putting the moves on her.

Penhall’s prerogatives: Other than hanging out at headquarters in a muscle shirt, he doesn’t do much. How much longer until he and Hanson become buddies, like we all remember?

Undercover blues: Hanson befriends the prime suspect, a teen loner who makes wisecracks and sells scalped concert tickets. Basically the kid is like Damone from Fast Times at Ridgemont High, but not as suave. A creepy janitor is our other suspect, and somehow no one notices how creepy he is. Later, threats of an illegal locker search force Hanson to give up his cover. 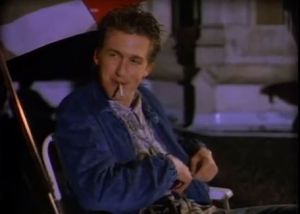 “Whenever possible, put on side one of Led Zeppelin IV.”

Goin’ to the chapel: Ioki hangs out at HQ studying for his sergeant’s exam, and he’s totally freaking out about it. In a hilarious coincidence, he chews out another driver after a minor fender-bender, and that guy turns out to be the one administering the test. 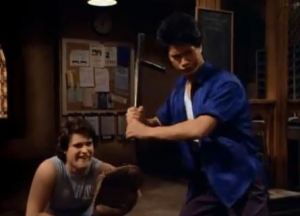 Torn from today’s headlines: There are a ton of mentions of Van Halen in this episode, a reference-that’s-not-a-reference to the band’s hit, “Hot for Teacher.” Actor Merlin Olsen gets name-dropped in regards to the mysterious stalker roses, a reference to a series of ubiquitous mid-‘80s commercials he did for FTD Florists.

Trivia time: One character is seen flipping channels on TV, and for a second the credit “directed by Patrick Hasburgh” flashes on the screen. Hasburgh is one of 21 Jump Street’s executive producers. Meta!

Jumpin’ or not? The plot is fairly predictable, but the dialogue is filled with a lot of little witticisms and one-liners. Sometimes these jokes are too clever for their own good, but that kind of makes them awesome. It’s jumpin’!

Next: Finish this sentence: “The future’s so bright…”