21 Jump Street rewatch: “The Worst Night of Your Life”

Rewatching 21 Jump Street. Catholic schoolgirls, arson, and the prom add up to this episode, appropriately titled, “The Worst Night of Your Life.”

What’s goin’ down: An arsonist is at work at a Catholic all-girls school, so Hoffs dons the uniform and goes inside, for a Bible-bleating take on Mean Girls.

Here’s Hanson: In these early episodes, Hanson is still very much the goody-two-shoes cop, evidenced in this one with his bowling team.  If you don’t think bowling is nerdy, you’ll think Hanson’s cheer of “Slam-a-rino!” certainly is. 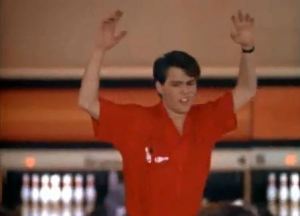 Not nerdy at all.

Penhall’s prerogatives: The tough-talking Penhall is taken down a few pegs when a woman he meets turns out to be a crook, who, with her accomplice, mugs him. He spends the rest of the episode with finding and arresting the pair, to get his dignity back.

“Gimmie your wallet… and your manliness.”

Undercover blues: Hoffs is shocked – shocked! – to learn that the Catholic schoolgirls aren’t all pious and saintly, but instead there’s all kinds of naughtiness lurking behind those plaid skirts and knee-high socks. To which I respond, has she never seen a movie before? 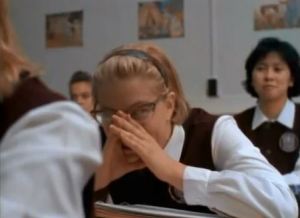 Goin’ to the chapel: At the episode’s conclusion, everybody heads to the prom! This is complete with the obligatory scene where our heroes meet at Jump Street to show off their formal wear. Ioki’s tux includes a Dracula cape for some reason.

Trivia time: This is the final episode with Frederic Forrest as Captain Jenko, but you wouldn’t know it. He doesn’t get any kind of sendoff until the next one. According to always-accurate internet rumors, Forrest disliked being on the show so much that he kept intentionally blowing his lines, just to screw with the producers.

Jumpin’ or not? The bowling/mugging B-plot pretty much overtakes the schoolgirl/arson A-plot, but that’s OK, because here we get the first real sense of the friendship between Hanson and Penall, which is what we all remember from this show. The latter part of the episode really shines with all the prom stuff, as all the Jump Street cops reveal they had miserable prom experiences the first time around, and now they have a second chance. Jumpin’!

Next week: Finish that riff!