Re-reading the Fantastic Four comics from the start. We’ve reached a big one with #55, one of my all-time favorite issues. Hopefully, I can make a good case for it. 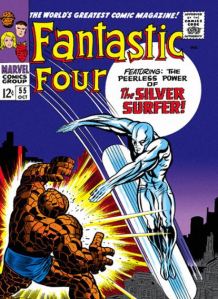 The issue begins at the Baxter Building, where Reed and Sue have returned from their honeymoon, happy to report that nothing dangerous or weird happened while they were away. (That’s very superhero-ish. You’d think they’d run into some kind of supervillain or mystery while honeymooning, but no.)

Ben, who was apparently with Reed and Sue the whole time (!) is anxious to see Alicia again. Remember, the last time we saw them together was at the end of the Galactus trilogy, when he mistook her for romancing the spacey Silver Surfer. He actually left her in that story, but now I guess he’s forgiven her because he can’t wait to see her again. When Ben can’t get Alicia on the phone, he worries she’s found a new beau, someone who’s not a giant rock monster. Reed and Sue tell him not to worry about it. Sue suggests Ben visit her in person, so he takes off on the FF’s jetcycle. 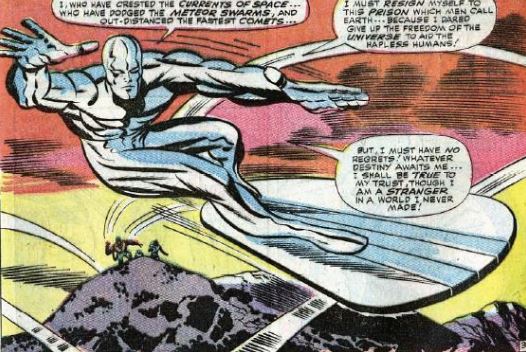 Elsewhere, a couple of mountain climbers are scaling one of the world’s most inaccessible peaks, only to find the Silver Surfer already standing there. He’s still exiled on Earth, and sees this planet as his prison. Still, he’s willing to accept this as his destiny. With that in mind, he too decides to pay a visit to Alicia, the one human who has shown him kindness. See if you can guess where this is going.

We finally catch up with Alicia, who’s left her Manhattan apartment and is now staying at a beach house on the Atlantic coast. (How much do sculptors make, anyhow?) The Silver waxes philosophic about how she’s the only good thing she’s seen since he’s been on Earth. Earth, he says, could be a paradise, except for all the humans’ greed and corruption.

While the Surfer has his “poor me” moment, Ben arrives. He enters the house and encounters a woman named Mrs. Binns. They’ve apparently met before, as he already knows her. He hears a man’ s voice coming from Alicia’s room (how does he know it’s her room?) and he heads up the stairs, his temper growing with each step. He finds the Surfer talking to Alicia, and he promptly flips out, punching the surfer through the wall and outside the house.

Time for fighting and lots of it. Ben is outraged, full of jealous fury, demanding that the Surfer fight him. The Surfer does fight back, but he elucidates the whole time about how Earthlings are all violent and warlike. As the two exchange blows, Ben realizes he’s pulling his punches even though he’s trying to force himself to hate the Surfer. The Surfer lets atomic energy build up inside his body, turning into a walking a-bomb. Ben knows this is trouble, and back on the jetcycle, hoping to lure the Surfer away from a populated area before any bystanders – including Alicia – are harmed.

In the abandoned warehouse district (convenient!) Ben and the Surfer battle it out some more, punching each other through more walls. Ben gets his hands on the Surfer’s surfboard, but he can’t break it in two. Ben then makes like the Hulk, smashing up the entire building, bringing the whole thing down on the Surfer. He’s about to cause even more destruction, but Reed and Sue arrive, stopping him. Alicia called them and asked for help. Reed relays a message from Alicia, saying Ben is the one she really likes. The Surfer, an alien, means nothing to her. The Surfer frees himself from the rubble, and Reed makes Ben apologize. Before flying off, the Surfer uses his powers to repair Ben’s jetcycle. He then creates some silver flowers out of nowhere for Ben to give to Alicia, so Ben can apologize to her as well.

Unstable molecule: Reed breaks up the fight by getting Ben to listen to reason. Early in the issue, he uses his stretching powers to carry in the luggage from the honeymoon, in the closest thing this issue has for the excuse-for-the-characters-to-show-off-their-powers-in-the-first-few-pages gag.

Fade out: Sue describes Ben as “obdurate.” I looked it up. It means resistant to the influence of others, stubborn, or unmoved by pity. Sure, why not? (Ben, hilariously, responds to Sue’s declaration of “obdurate” with, “My religion’s got nothing to do with it!”)

Clobberin’ time: While the Silver Surfer is set up as one of the most powerful Marvel characters, Ben nonetheless puts up a good fight. The Surfer describes Ben’s initial attack as “savage, unthinking brute force,” and Ben twice succeeds in separating the Surfer from his cosmic surfboard.

Flame on: While all this is going on, there’s a three-page subplot with Johnny and his musclebound Native American friend Wyatt Wingfoot. They’re in the Himalayas, investigating reports of a monster. That monster turns out to be Lockjaw, the Inhumans’ teleporting dog. This is good news for Johnny, because if Lockjaw escaped the dome that has the Inhumans trapped, then maybe Crystal and the other Inhumans can escape as well. More in this in future issues.

Trivia time: This issue is well known for being reprinted in 1974’s Origins of Marvel Comics, one of the first comic book trade paperbacks. Or, at least, one of the earliest to be widely read. Issue #55 is the “now” following the first issue’s “then.” The trade also has origins and follow-up issues for Spider-Man, the Hulk, Thor, and Dr. Strange.

Fantastic or frightful? OK, so why is this issue one of my favorites? If you look at just the plot description above, you might think Ben comes off as just an angry jerk, but it all succeeds in the dialogue. Stan Lee’s playful sense of humor is on every page, and Ben has one amusing line after the next after the next. Such as:

“I figured that’d bring ya down to Earth, you crummy Casanova!”

“You ain’t exactly playing potsy with no campfire girl!”

And so on. Ben, with his rough and tumble ways, makes a perfect foil for the elegant poetic Silver Surfer, and with him Stan Lee gets to write as flowery and 1960s hippy-ish as he wants, with lines like these:

“I, who have crested the currents of space, who have dodged the meteor storms and who have outdistanced the fastest comets, I must resign myself to this prison that men call Earth!”

“Your courage is laudable, but you are like a child, attempting to battle the elements themselves!”

“You have forgotten than I am not bound by the physical laws of Earth! You still do not see that I can increase my extra-terrestrial energy to almost any degree that I require!”

Next: Don’t be so negative!