21 Jump Street rewatch! It’s season one, episode eleven, “16 Blown to 35.” Our heroes investigate the world of teen modeling, and they’re shocked to discover it has a skeezy side.

Here’s Hanson: Hanson doesn’t do much this week, except to chime in with some side exposition. He makes a few jokes at the captain’s expense, though, showing his gradual transition from “uptight cop” to “bad boy.”

Penhall’s prerogatives: Penhall makes the cut at modeling school, thanks to his “primitive style.” Tough guy that he is, he’s not thrilled to be part of the modeling thing.

Undercover blues: Penhall’s modeling gig has him wearing a red beret and holding a gun while surrounded by pretty girls. What magazine or advertisement do you suppose this was for?

Goin’ to the Chapel: Captain Fuller is in the spotlight this week, as we learn he’s divorced and has a son. Their relationship is strained, to put it mildly. The son has decided to embrace the “rasta” lifestyle in a big way, much to Fuller’s frustration. We also learn Fuller is a huge baseball fan. 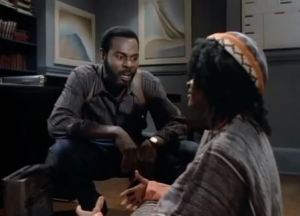 Trivia time: The criminal scumbag who runs the modeling school is played by recognizable character actor David Paymer, one of “those guys” who’s been in every show and movie. He’s real good at playing real sleazy.

Jumpin’ or not? Kind of hard to make jokes about this one, considering the serious subject matter. The drama is kept relatively low-key, though, never descending into hysterics like other shows might do. It’s jumpin’!

Next week: Punk out, punks.