Re-reading the Fantastic Four comics from the start. Feels like this Doctor-Doom-has-the-Silver-Surfer’s-powers story has been going on forever, doesn’t it? We’re at issue #60, and it’s not over yet. 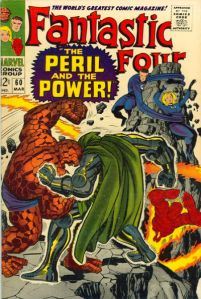 The issue begins with Dr. Doom stranding an ocean liner on top of a giant mountain, just to demonstrate his awesome powers. After seeing this on TV, Ben wants to go fight Doom head-on, but Reed urges caution, saying it’ll take more than brute force to stop Doom. Wyatt Wingfoot shows up (I guess the FF gave him access to their headquarters, otherwise it looks like he just strolls in from outside) and says Johnny has flown off to attack Doom on his own.

We join the Torch in Latveria, for several pages of him fighting Doom. Doom transforms himself into a crystalline form that can withstand a million degrees of heat. He then traps Johnny in a “solidified cyclone.” (That’s a real thing, right?) Then we check in with the Silver Surfer, still jailed in Doom’s castle, and still in a weakened state, but now with some jerk Latverian guard mocking him. 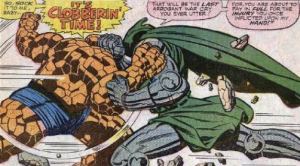 Reed, Sue and Johnny fly to Latveria in a ship loaned to them by the Black Panther. There’s no sign of Doom, but the ship’s “ionic triangulator” reports that Doom is in the area. Doom then appears and attacks, bringing all the trees to life and having them crush the ship. There’s several pages of the three heroes fighting nature, as trees and rocks attack them. Doom confronts them in person and speechifies about how powerful he is. Plus, he’s still ticked off about Ben injuring his hands way back in issue #40. Ben attacks, but Doom traps in a ray of cosmic energy. It looks like Ben is defeated but, thanks to his awesome strength and his iron will, he breaks free and lands a punch right on Doom’s face. 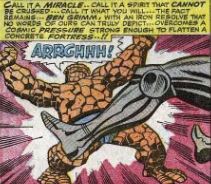 We then go to outer space, where the Watcher is (what else?) watching the battle. He muses on how he could help if wanted to, but he’s sworn not to. Then, uncharacteristically, he looks away from the fight, choosing instead to watch some primitive aliens on some other planet.

Reed and Sue reunite with Johnny, finding him among the wreckage. They catch up with Ben, who Doom has trapped in a stasis field. Cue more fighting! Doom continues to show his command of the elements by using rocks and trees as weapons. Sue manages to trip him up with her invisible force fields. This only slows Doom down a little, and he says his power allows him to disintegrate matter, and that’s how he’ll take out the FF. 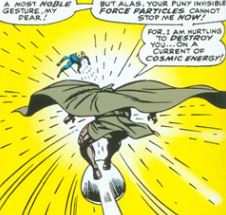 On the other side of this same mountain range, a bunch of soldiers are spying on some visitors. It’s the Inhumans, recently freed from their trapped city. The soldiers are shocked to see Karnak chop down a tree his bare hand, and then they see Crystal start a fire with a wave of her hand. From this, they surmise, “She can actually affect the elements!” Medusa and Gorgon then chase off the soldiers. If you hadn’t read the previous issue, you wouldn’t know they’re there to help Crystal find Johnny, because that’s not mentioned this time. 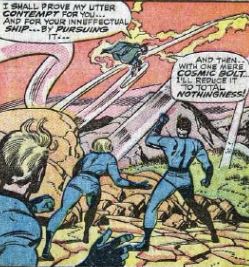 Doom then continues to speechify about how great he is, when Reed’s remote control miniature bat-shaped plane he invented last issue comes flying in. So… this was Reed’s plan all along? I guess so, because Doom is weakened. It’s only temporary, though. He hopes on the surfboard and takes off, to pursue the miniature plane and destroy it. Then, there’s burst of light in the sky, and the board flies away by itself. Reed explains that the plane went into space, but having the Silver Surfer’s powers means Doom is also exiled to Earth and can’t leave, just like the Silver Surfer is. Doom vanishes and the surfboard flies away by itself, presumably to return to the Surfer. Reed proclaims, “It’s over!”

Unstable molecule: Reed does that thing where he stretches into the shape of a parachute to save him and Sue from a fall. He also stretches his arms across the trees to avoid a fire Doom starts beneath him. But it’s his science genius that saves the day.

Fade out: Sue is the only one who manages to succeed in any sort of offensive during the fight against Doom, disorienting him and knocking him off the surfboard.

Clobberin’ time: Ben’s escape from Doom’s energy field is a great moment for him. It’s not just his physical strength but his strength of will that allowed him to succeed. (Could Ben be a candidate for a Green Lantern ring?)

Flame on: Johnny’s best move in the fight is to burn a tunnel under the ground and then pop up behind Doom and surprise him.

Trivia time: The caveman-like aliens watched by the Watcher are from “sector 34.” The Marvel Wiki doesn’t have an entry on “sector 34,” just “project 34,” the anti-missile defense invented by Bruce Banner (alter ego of the Hulk) during his guest spot in Fantastic Four #12. Yeah, let’s see you try to come up with trivia specific to this issue.

Fantastic or frightful? Another “all they do is fight” issue. Given all the buildup, it’s a little anticlimactic that it all ends with everybody throwing punches on a nondescript mountainside. There are a few nice character moments and Kirby’s art is stellar, but other than that, this one’s not as much of a standout.

Next week: Remember when Reed said “It’s over?” It’s NOT over.