Re-reading the Fantastic Four comics from the start. At the end of the last issue, Reed was trapped in the Negative Zone, with no hope of returning. In issue #62, it’s still called “Fantastic Four” and not “Fantastic Three,” so let’s see how they’ll get out of this one. 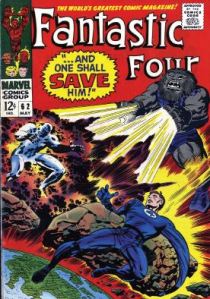 The excitement begins in Reed’s lab, where Ben remembers there’s a “trans-barrier phone” that can communicate with the Negative Zone. He uses it, and speaks to Reed. Reed reiterates that there’s no chance of escape from the Negative Zone, and he urges his teammates not to come looking for him. As Reed floats beyond communication range, he asks Reed to tell Sue that he loves her and will always love her. There’s some high drama as Ben and Sue break down, realizing that Reed is forever gone.

Then, it happens. The moment we’ve been waiting for since way back in issue #48. Johnny’s long-lost love Crystal appears, along with the Inhumans’ giant teleporting dog Lockjaw. It’s not the run-along-the-beach-and-fall-into-each-other’s-arms reunion we’ve been expecting, though, because Johnny’s so distraught about Reed that he barely notices. (I get what Stan and Jack are going for here, but if a hot girl and a dog the size of a car materialized out of nowhere right in front of you, you’d at least look up.)

There’s a great two-page spread featuring another one of those trippy photo images of the Negative Zone, as Johnny and the others fill Crystal in on what’s happening. What does the Negative Zone look like, exactly? Just a bunch of rocks floating in space, really, but Jack Kirby draws them so they look appropriately far-out and cosmic. While the others have given up on Reed, Crystal takes charge and insists that it’s not too late. She tells Johnny that it’s not just her but all the Inhumans that are free of their city’s imprisonment. She and Lockjaw then teleport away, with her telling Johnny she’ll be right back.

Inside the Negative Zone, we meet a pair of aliens who say they are transporting dangerous cargo. Said cargo is actually a dangerous prisoner, unseen to us as he’s wrapped head to toe in an “adhesion suit.” The aliens affix their prisoner to a passing asteroid and take off. Reed sees the aliens fly by and he marvels (heh) at how intelligent life exists in the Negative Zone. He stops whining about his fate and instead does the scientist thing, remarking to himself about all the potential wonders of this new place. He’s saying all this, though, while hanging onto the same asteroid as the aliens’ prisoner.

From there we cut to somewhere in Europe, where a group of soldiers in purple uniforms are about to test their new “atomic nullifier.” I have no idea what country they’re supposed to be from. The Inhumans show up and a fight breaks out. Basically, they get their own excuse-to-show-off-their-powers-for-a-few-pages thing. They’re reunited with Crystal, who begs them to help Reed. With a nod, Black Bolt agreed to do so. He selects one Inhuman to go after Reed, but we don’t yet see which one.

Back in the lab, Ben flips out and destroys a bunch of equipment in his frustration over not being able to help Reed. Crystal then returns with Lockjaw and… Triton, the Inhumans’ fishy aquatic guy. He enters the space-time chamber, which allows him to pass through into the Negative Zone. Triton is so awesome that he can “swim” through space just like he does in water, passing by a number of strange sights and giant monsters on his search for Reed. He finds Reed, about to enter an exploding atmosphere, and rescues him. The explosion also frees the mysterious prisoner, who reveals himself as Blastaar, the living bomb-burst. He’s able to fly like a rocket, propelled from energy released from his fingertips (no, really), and he pursues Triton and Reed. 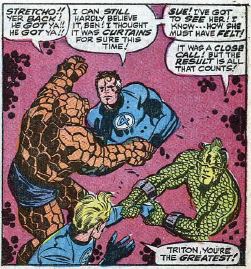 Triton and Reed emerge heroically from the Negative Zone back to the Baxter Building, where it’s happy reunions all around. They all leave the room just as Blastaar emerges behind them. Blastaar hops out the window, getting a look at New York, and he meets up with the Sandman, who has apparently been hanging out on the Baxter Building’s roof after his escape last issue. Blastaar and Sandman recognize that they’re both criminals, and they decide to work together. With no idea that’s happening right over their heads, Reed and Sue fall into each other’s arms, as do Johnny and Crystal. Ben makes a wisecrack about everyone being all “mushy.” It’d be a happy ending, except the caption reminds us, “Next issue: Blastaar!”

Unstable molecule: Even when facing certain death in an alternate dimension, Reed remains positive, taking a moment to soak in the amazement of where he is and what he’s experiencing.

Fade out/Clobberin’ time/Flame on: Sue, Ben, and Johnny do nothing. They are basically spectators in this issue, leaving all the action and heroics up to Crystal and Triton.

Trivia time: The original Star Trek had debuted on TV when this issue was produced, and I wonder how much of an influence it was on this issue. Along with the overall outer spacey vibe, Blastaar has an “automatic translator” much like Trek’s infamous universal translators, Reed waxes poetic about the endless possibilities of space like the Trek characters so often do, and Blastaar even says at one point, “They go where none before them have ever gone!” Sound familiar?

(New end-of-review-stuff category!) Commercial break: An ad in this issue is for a 7-foot-long, 200-pound “nuclear submarine.” The ad further states that it can fire real missiles and real torpedoes. It’s only $6.95 with 75 cents for shipping. You’d think there’d be a disclaimer telling kids that it’s not really nuclear, but no. You don’t suppose…

Fantastic or frightful? For all the drama over the crisis in the Negative Zone, it was resolved pretty quickly. Blastaar is a lot of fun, but we’ll get to him in the next issue. The super-cosmic art and seeing Crystal in a take charge role are what make this one worthwhile.

Next week: Bombs away!