Re-reading the Fantastic Four comics from the start. At the end of the last issue, Johnny and Crystal were reunited, while the evil Blastaar came out of the Negative Zone and teamed up with the Sandman. Now, in issue #63, they make their move.

The caption on the splash page tells us that only two seconds have passed between this previous issue and this one. An unseen force smashed a hole in the roof of the Baxter Building. Reed immediately deduces that someone else came back through the Negative Zone portal when he did. Reed tries to look through the hole and gets blasted. The Inhuman Triton, still hanging around after last issue, flies through the hole with his trusty “air gun,” and shows how awesome he is by fighting Blastaar. Then Sandman distracts Triton, allowing Blastaar to knock him out.

Blastaar calms down just long enough to explain his deal: He’s a power hungry conqueror, and now that he’s discovered Earth, of course he wants to rule it. He describes Sandman as his guide to this new world, but Sandman keeps calling Blastaar his partner. The two of them descend from the roof into the Baxter Building.

Out in the city, Johnny and Crystal are leaving a restaurant (they got pretty far in those two seconds), where they see a bunch of cops on the move. Blastaar and Sandman are now casually walking down the street, duking it out with the cops (How they got from the Baxter Building to here I have no idea). The police have a special “cement gun” that traps Sandman, only to have Blastaar set him free. Johnny flames on and joins the fight. In a full-page spread, Blastaar brags about how powerful he is (he’s rather boastful, this Blastaar). While the bad guys concentrate their attacks on Johnny, they’re attacked from behind by the Thing. Sandman escapes into the sewer, but Blastaar fights on, spending the next couple of pages duking it out with Ben.

Back in HQ, Reed tends to Triton’s injuries, and then checks in on the battle with one of remote viewing devices. He says it’s up to him to whip up some science to stop Blastaar. Outside, Sandman bursts from under the street and attacks Ben, while Blastaar, er, blasts at Johnny, only to have him absorb the heat of the blast and send it back to Blastaar. At one point, Blastaar tries to grab a hold of Crystal, only to have her summon a tornado out of nowhere (!) in defense. OK, what are her powers?

Sandman and Ben end up by the ocean, where Sandy hurls Ben off of a dock. (I see this a lot in movies and comics, where New Yorkers can access the ocean just by going to “the docks.” Is this a real thing?) Sandman thinks he’s defeated Ben, but Ben smashes the pier and pulls Sandman into the water with him. With one all-powerful punch, Ben dissipates Sandman’s sand, spreading it out among the tide. (So if you were reading this for the first time in 1967, you’d think Ben just murdered Sandman, correct?)

Reed and Sue show up, as Reed has invented a helmet that can stop Blastaar, if only they can get it on his head. It’s another few pages of fighting before he, Sue and Johnny manage this. Once the helmet is on Blastaar, he loses all his powers, making him as vulnerable as an ordinary human, so Reed’s the one who takes him out with a single punch. Reed says they’ll put Blastaar back into the Negative Zone where he belongs, and Ben shows up to make a joke about how hard it is to find a cab in New York. No cliffhangers this time, just a happy ending for all. 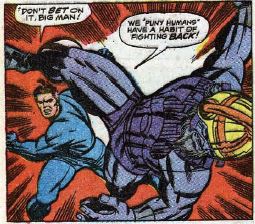 Unstable molecule: It takes Reed several tries before he gets his new gizmo to work, at one point proclaiming, “I’ve failed!” But then he delivers the final blow.

Fade out: Sue helps out here and there with her force fields, but mostly sits this issue out.

Clobberin’ time: Ben’s fight against Sandman is a highlight, showing his resourcefulness as equal to his strength.

Flame on: The caption tells us that while Johnny and Crystal were at that restaurant, they were “talking about the things that all young lovers have talked about since time immemorial…”

Trivia time: By this point, we still have no real explanation of what Crystal’s powers are. In her first appearance, she ran over some flames without being burned. Many issues later, she controlled a campfire with her mind as some random soldier declared, “She can control the elements!” Then, in this issue, she summons a tornado out of nowhere with the power of her mind. Will they ever take a second to stop and tell us what her powers are? (Yes, I know I could just look her up on the Marvel wiki, but I’m more interested in how and when this will be handled in the stories themselves.)

Commercial break: A lot of comics of this era ran this ad for a male baldness cure. Because comics are for kids!

Fantastic or frightful? Blastaar is kind of like a professional wrestler, spending more time talking about how much he kicks butt than actually kicking butt. There’s some nice action beats, but overall, this issue doesn’t bring anything new to the table.