Re-reading the Fantastic Four comics from the start. Issue #64 promises a new start, and an intriguing new villain. 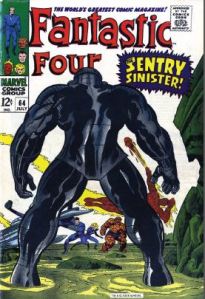 We begin in Reed’s lab, of course, where he and Ben are dismantling the Negative Zone viewer so that no more bad guys will escape from the Negative Zone and attack Earth (that’ll be the day). Sue is upset, though, because this is supposed to be their vacation and she wants to enjoy the spring weather. Reed apologizes, sort of, and agrees that it’s time for a vacation. Ben, Johnny and Crystal are invited, as is the inhuman Triton, who is still hanging around after last issue. 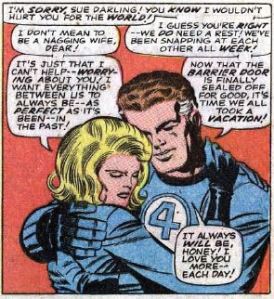 Elsewhere in a remote jungle, a professor leads a two-man expedition, saying he’s searching for the ruins of an alien civilization that once ruled the Earth “before the dawn of history.” They discover an opening in the ground, leading to underground ruins containing ancient alien machines. The professor deduces that this was once a spaceport operated by a race of aliens called the Kree. The explorers are then attacked by a metallic blue and purple fellow calling himself the Sentry. 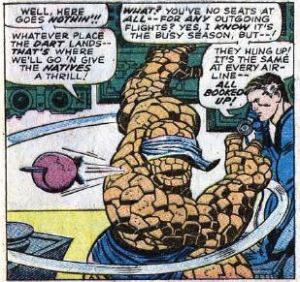 Back at HQ, there’s some comedy shtick in which Ben chooses the team’s vacation spot by throwing a dart at a map while blindfolded. The dart lands on an island in the South Pacific. There’s some talk about whether they’ll fly by commercial airline or by their own Pogo Plane (if you owned your own plane, would you ever fly commercial?), and then Johnny, Crystal and Triton say they’d rather stay in New York. Ben, although briefly referencing Alicia, decides to come along. 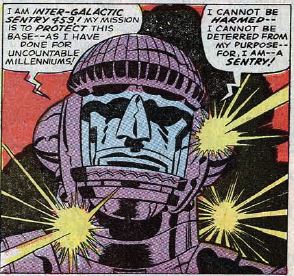 Back in the jungle, which we know see was on an island, the Sentry sets up a “vibro-screen” to prevent any other outsiders from finding the place. Wouldn’t you know it, the FF’s Pogo Plane happens to be flying overhead as he does this. The plane is in danger of crashing, but Sue helps right it by surrounding it with a force field. It’s revealed that the Sentry is a giant. He grabs a hold of the plane, our heroes fall out, and… fighting! The Sentry insists that he not a robot (he does not like being called a robot), and that his strength is able to increase until it matches and/or surpasses any opponent. He proves this by giving Ben a pounding and then threatening to drown him.

Reed says he wants to get back to the plane and call Johnny for backup. Then he does that thing where he stretches into a slingshot shape and flings himself through the air. After struggling with the Sentry, Reed is flung into the ocean, where he hopes to rescue the drowning Ben.

Back in New York, Triton is taking the FF’s jet cycle for a spin, giving Johnny and Crystal some alone time. Before anything steamy can happen, their lovin’ is interrupted by Lockjaw, who teleports into the room. That’s when Sue contacts them on the “vidio [sic] scanner” and fills them in. Crystal suggests using Lockjaw to teleport to the island, but the big dog doesn’t seem in the mood anymore.

At the island, Reed succeeds in pulling Ben out of the ocean, but both are vulnerable from attack by the Sentry. Sue helps by turning them invisible, but the Sentry responds by creating a tidal wave that threatens to destroy everything on the beach. Johnny shows up just in time, burning a trench in the beach that traps all the water (guess it wasn’t that huge of a tidal wave). The Sentry tries burying Johnny in the sand, but Johnny’s too skilled to let that happen, saying he’s learned from all the times he’s fought the Sandman.

As the fight intensifies, the entire island starts to fall apart. Reed and Sue find the explorers from earlier and rescue them. Everybody gathers around Lockjaw, who teleports them away. Then, we get a strangely downbeat ending. The Sentry admits his defeat, and, acknowledging that he hasn’t heard from the Kree in ages, he destroys the island, calling this his “final report.”

Unstable molecule: In his big hero moment, Reed says that “headline writers from coast to coast” gave him the name Mr. Fantastic. But, no. He gave himself that name way back in the first issue. Here we see Reed’s ego getting out of control, something a lot of readers have accused him of over the years.

Fade out: Sue starts out the issue in “nagging wife” mode, but she later twice saves Reed and Ben with her powers.

Clobberin’ time: This isn’t Ben’s finest hour, as the Sentry pretty much beats the crap out of him. There’s a mention of Alicia, who we haven’t seen in almost ten issues, bringing up the question as to whether they’re still a couple or not. We’ll get more of this in the next issue.

Flame on: Johnny shows some real growth by not allowing his fire to be put out so easily by sand. He’s no longer the “kid,” but has a real newfound confidence with his powers. You don’t suppose we could pin this change on Crystal’s presence in his life, do you?

Trivia time: This Sentry is not related the current Marvel character by the same name, who had a short-lived run among the Avengers and who was controversially retconned into Marvel history in his origin mini-series.

The big deal with this issue is that it’s our first mention of the Kree. Although established as a dead race in this story, that’s not the case. The Kree’s ongoing rivalry with the alien Skrulls has led to some of the most famous tales in Marvel history.

Fantastic or frightful? Basically a generic fight scene, the issue succeeds in its smaller, character-based moments. Not many comics can get away with lengthy scenes of vacation planning, but it works in Fantastic Four, because this group really does feel like family by now.