What’s goin’ down: A teen girl is pregnant, and she insists that Ioki is the father, not knowing he was an undercover cop. Ioki denies it, but no one believes him. He could lose his badge over this, so the Jump Street crew investigates in the hopes of finding the real father. 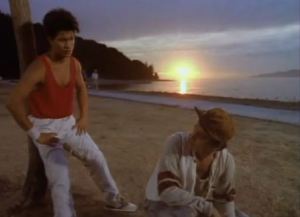 It’s no day at the beach.

Here’s Hanson: Hanson serves a “supportive best friend” role for Ioki, keeping Ioki out of trouble while our heroes try to sort out the truth.

Undercover blues: In keeping with the episode’s theme, Hoffs gets a school assignment where she has to take care of an egg as if it’s a baby for a few days. Penhall then ends up on egg-sitting duties.

I am the egg man.

Goin’ to the chapel: A reporter has taken an interest in the Jump Street program. She argues that an interview with Fuller could help smooth things out with the mayor’s office, which is still threatening to pull the plug on Jump Street. This foreshadows the upcoming season finale.

Torn from today’s headlines: Teen pregnancy, and all the drama that goes with it. Once the real father is revealed, then statutory rape becomes an issue as well. Heavy stuff. Also, not that I’m an expert on these things, but the ‘80s-era home pregnancy test looks unnecessarily complicated, with glass vials hooked up to a big plastic doo-hickey.

She blinded me with science.

Trivia time: There’s a reference to “the zoologist on The Tonight Show.” That would Joan Embery of the San Diego Zoo, who was a regular on Johnny Carson’s Tonight Show, bringing out all kinds of exotic animals for Johnny Carson to mess around with. 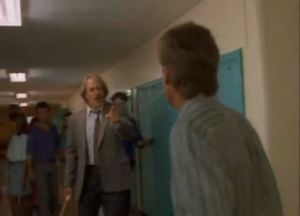 Jumpin’ or not? All the tears and hand-wringing give way to an action finale in which the girl’s dad goes nuts with a baseball in the school hallways and Ioki must stop him. So this is kind of a quintessential 21 Jump Street episode, which has both the cheesy morality and the action/comedy goodness the show is famous for. It’s jumpin’!

Next week: Taste the rainbow!