Fantastic Friday: The chase is on

Rereading the Fantastic Four comics from the start. Issue #69 continues the “Ben goes bad” storyline started in the last issue.

Previously, a mysterious villain, whose identity still hasn’t been revealed, disguised himself as renowned scientist Dr. Santini, here to help Reed find a cure for Ben. Only, the imposter sabotaged Reed’s equipment, creating a personality change in Ben. He’s now filled with dark rage. All this gets recapped on the first page. 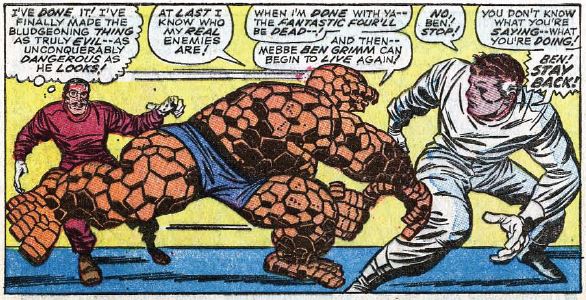 And… fighting! There are a few pages of Ben flipping out and attacking Reed and Sue. Ben grabs Reed’s “high voltage discharger” (a ray gun, basically) and attacks the two of them. Johnny joins the fight, separating Ben from the others with a wall of fire. Reed gives a “this is all my fault” speech, and says he must face Ben alone. Elsewhere, the imposter goads Ben to keep attacking before Reed can invent something to stop him. The imposter then slips away from Ben, sneaking into Reed’s lab. Now he has all of Reed’s high-tech wonders to himself.

The imposter decides the time for deception is over, and he removes the disguise to reveal himself as… the Mad Thinker! He speechifies about how much he hates that name (he’d prefer just the “Thinker”) and brags about being the one to finally defeat the Fantastic Four. Reed insists on facing Ben alone, so he has Johnny take Sue and Crystal to the “precinct house” for safety. (He can’t just call it a police station?)

Ben attacks, and the fight goes out onto the New York City streets. Reed bends into a glider-like shape and flies off, with Ben in pursuit. Inside the Baxter Building, the Mad Thinker continues to speechify to himself, reminding the readers that his shtick is how his computers can predict anything, and they’ve predicted he’ll make an important discovery at this moment. He’s right, as he finds his way into the Negative Zone room. Outside, Johnny joins Reed in escaping from a still-wrathful Ben. Johnny attacks Ben, who uses his strength to create a vacuum, snuffing out Johnny’s flame and knocking him out. Reed is on a nearby rooftop, and Ben starts scaling the building, King Kong-style, to get at him.

At the police station, the cops are mobilizing, as Sue and Crystal are told that officers are scrambling to get on the scene. More King Kong action as police airplanes circle the building, firing at Ben as he climbs up the side. Reed still wants to try to reason with Ben, telling Ben that Santini messed with his mind. Ben won’t have it, and is about to kill Reed, but Reed disappears in front of him. This is because Sue arrives on the scene and turns him invisible. Reed orders the cops to withdraw the jets, and they follow his orders without question (hey, if I can buy that fighter jets are police issue, I can buy that they take orders from superheroes).

Somewhere else in the city, we catch up to the real Dr. Santini, who wakes as a prisoner in the Mad Thinker’s hideout. He’s being guarded by one of the Mad Thinker’s androids (not the Awesome Android, but a different, human-sized one). At the Baxter Building, the Mad Thinker is in awe of the Negative Zone, but does not screw with it, predicting that if Reed is still alive, Reed will soon deduce the Mad Thinker’s true identity. So he flees the scene.

At the police station, Johnny has recovered, and Reed does indeed figure out that the imposter’s interest in Reed’s computers could only mean that it was the Mad Thinker in disguise. The cops announce a city-wide search (not an APB or even a BOLO) for the Mad Thinker. Out on the street, Ben does Raphael’s trick of disguising himself with a coat and hat, and sneaks past the cops and firemen, promising to finish off Reed – forever!

Unstable molecule: Interesting to see Reed on the defensive, running for his life instead of always coming up with a plan. He doesn’t want to hurt Ben, but he doesn’t want to be killed, either, so he has no choice to run.

Fade out: It’s safe to assume that Sue is sent off to be protected by police during all this because she’s pregnant, but the pregnancy isn’t mentioned.

Clobberin’ time: Ben’s new personality is kind of like those really early Hulk issues, when the Hulk was really talkative, but still clearly a different personality than Banner. His using one of Reed’s devices against him shows that Ben hasn’t become a total animal, but is still able to use his wits, despite his fury.

Flame on: Johnny saves Reed twice during the fight before Ben takes him out. Crystal does nothing, though perhaps we can assume that she’s acting a bodyguard for Sue.

Trivia time: Upon the Mad Thinker’s big reveal, a caption states “Even Honest Irving was surprised!” This is a reference to Irving Forbush, a fictional Marvel staffer who was the butt of many of Stan Lee’s jokes, and who around this time had a short-lived superhero career as “Forbush Man” in Not Brand Ecch, Marvel’s Mad Magazine ripoff.

Commercial break: An ad for… dentures? Who was the target audience for comics in the ‘60s again?

Fantastic or frightful? Not much happens in this issue. Ben has gone bad and chases Reed around for a while. The King Kong scene is fun, but overall, this one works only in context of the bigger story. It’s a definite precursor to today’s mutli-issue arc storytelling that dominates comics.

Next: Bring on the androids!