The previous scene ended at night, when, in a bout of frustration, Jen threw the crystal shard into the forest, rejecting his quest. It’s morning now, and – after a brief look at an anteater-like critter up in a tree – we get a quite romantic shot of Jen and Kira sleeping, with him in her arms. After seeing the Podling village, her home, destroyed, Kira has instead opted to stay with Jen. This says a lot about her, in that she’s devoting so much of herself to this stranger she just met. While Jen remains mostly unaware of his quest (still!) Kira somehow knows of his importance, or at least knows it’s important to stick by him.

In voiceover, Jen says he misses his master, the Mystics, and their valley. “I never loved them enough,” he says. That says a lot about his personality, and where he is mentally at this part of the story. He’s rejected his quest, but he’s still the good guy. So, we’re reminded of this by giving him regret, and showing his personal integrity, and that he has a big heart. This way, instead of us shaking our fists at him for being a quitter, we’re still on his side, because we see how troubled he is over all this.

Notice that while Jen and Kira are sleeping, Fizzgig is awake, doing the “watch dog” thing, in case there’s trouble. Jen and Kira wake at the same time (an after-effect of dream-fasting, perhaps?). Kira says they’re safe, but Jen, still wallowing in the dumps, says he doesn’t think anyplace is safe anymore.

Jen takes a look around, and finds that they’ve spent the night among a bunch of ruins, partially-fallen stone structures covered with vines and moss. Kira describes the ruins as “the houses of the old ones,” to which Jen follows up with, “our ancestors.” So, for as much as critics chide Jen for cluelessness, here he shows some knowledge of the world around him. We’re about to see him show a lot more. Kira finds the crystal shard where Jen threw it, in the center of a triangle-shaped stone. (Remember our Dark Crystal symbology: Triangles are a big deal because this world has three suns.) She picks it up, and it shows no signs of reacting to her at all.

Looking at a stone wall, Jen says he can feel something. He’s instantly taken with wonder at this place, while Kira shows some fear, saying bad things happened here once. It’s an interesting bit of role reversal, in that previous scenes had her jumping into action with him meekly following. Now he’s the one in the take-charge role and she’s the one urging caution. I don’t find this inconsistent, instead seeing this as the two of them being of one “type.” Jen reinforces this in his next line, in which he says he can tell this place was built by Gelflings. Kira reminds him that all the Gelflings are gone now, “killed by the Skeksis long ago,” she says.

They walk farther into the ruins and we get a better look at them. Hey, remember back when I insisted that fans don’t call the Skeksis’ castle a citadel? That’s because this place, according to the tie-in fiction, is named the Citadel. Also, it was clearly constructed out of carved rock. A lot of the architecture we’ve seen in the film was shaped out of living rock, with curved, natural angles. The Citadel, though, wasn’t shaped through magic or energy, but built with good ol’ engineering, including stonework and bricklaying. It’s ambiguous as to what level of technology the Gelflings achieved. The Legends of the Dark Crystal manga shows them living in tents and caves, but the Creation Myths graphic novels give us brief-yet-tantalizing glimpses of Gelfing boats and huge cities on the seacoast, but beyond that, we don’t really know how far their civilization really advanced. Of course, it’s perfectly plausible that different Gelfling clans achieved varying levels of sophistication, but we’re left only to speculate.

Kira then sees a large stone chair, is fascinated by it, and sits on it. We’re never actually told this, but most fans generally believe that this was once the throne of the Gelfling queen. The Gelfling queen is an enormous question mark in Dark Crystal history. We know there was a Gelfling queen, and that she once united all the Gelfling clans. Beyond that, nothing. Who was she? How did she unite everyone? Was this unification successful? None of this info has ever been revealed. Many others have speculated that this shot of Kira sitting in the throne means she’s a direct descendant of the Gelfling queen, but that’s mere speculation. For all we know, it’s just a chair.

Jan calls Kira over to him, saying he’s found something. He’s found a carving on the wall, with an image shaped like the shard. Kira asks what the funny marks are, and Jen replies that it is writing, which he defines as, “words that stay.” Jen’s Mystic master taught him how to read, an education never available to Kira. See, critics, Jen is not useless. Jen then reads the prophecy: “When single shines the triple sun… what was sundered and undone… shall be whole, the two made one… by Gelfling hand, or else by none.” That “or else by none” part is interesting, because it doesn’t state for sure that a Gelfling will save the world, just that it might happen. As Aughra said earlier in the film, the Great Conjunction could save the world or destroy it, despite Jen’s presence.

This carving is the Wall of Destiny, and it’s a big deal. Imagery on the wall more or less tells the backstory, split into two halves. On one side of it we can see the castle, and the Urskeks standing around the crystal. This is followed by an image of the Skeksis. On the other half, there are images of the Mystics, and of the three suns meeting in the sky. Above this timeline, there’s an image of a Gelfling playing music, and another Gelfling offering a plant to one with a crown (the queen, perhaps?). The other side shows a similar scene, with a Gelfling offering a bowl to a female Gelfling with angelic wings, for a sly bit of foreshadowing. These images of Gelflings handing items to one another is supposed to symbolic of their dream-fasting.

A lot of fantasy stories with prophecies will skip over where the prophecy came from, usually just saying it’s “ancient.” The Dark Crystal tie-in fiction, however, fills us in on where the Wall of Destiny came from. The story goes that the Gelfings wanted to know if there was any hope of living free from fear of the Skeksis, so they lit the “fires of prophecy.” (Big Gelfling spiritual bonfires are established as a “thing” in Creation Myths.) Afterwards, seven groups of seven Gelflings each took refuge on hilltops, staring at the stars for answers. The canon then merely states, “their dreams were made stone,” which is where the Wall of Destiny comes from. Furthermore, the canon says electron microscope analyses of the wall shows that these images were carved not with tools, but with a process involving intense localized heat. This, presumably, is from the raw energy generated by whatever magic and/or mental power it took for the seven groups of Gelflings to be able to peer into the future.

Wait, what was that about an electron microscope? This question brings us to the weirdest, head-scratchingiest part of the entire Dark Crystal mythos. The Dark Crystal is often lauded for being an immersive fantasy world with no human characters. Now’s the part where I blow your mind: There is a human character, from Earth, in the Dark Crystal canon. His name is J.J. Llewellyn. To figure out who this is, let’s take another look at the book The World of the Dark Crystal. It’s a cool art book with a lot of photos and drawings from the movie. They could have stopped there, but, no. Instead, the book is “written by” a fictional character, J.J. Llewellen, who, we’re told, has examined these artifacts from the world Thra (where The Dark Crystal takes place) and the “Book of Aughra,” which outlines the history of Thra, its creatures, and the events of the film. Half of World of the Dark Crystal is direct quotes from Aughra’s writings, and half is from this Llewellyn character, and his interpretation of Aughra’s words and the many symbols and images from the movie. Consider it Dark Crystal advanced reading. 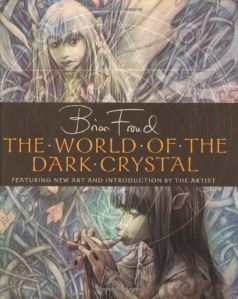 OK, so that’s where Llewellyn comes from, but who is Llewellyn? The only biographical information we get from him is merely “Oxford, 1981.” (The movie came out in 1982, but the World book wasn’t published until 2004.) Within the story, we’re left to extrapolate that someone from Earth (astronauts, maybe?) found Thra, and returned with these artifacts, mostly from Jen and Kira’s era. Llewellyn was then brought in to do the anthropologist thing, and interpret the artifacts, which includes the Wall of Destiny, so that the rest of us on Earth can learn the story of the Dark Crystal. If this happened in ’81, then it gets super-meta, leading to the movie in ’82. I’m deep into speculation on all this. Could Llewellyn be a real person, someone who worked with Brian Froud on the book? It’s possible, but his name doesn’t appear in any of the book’s fine print, and repeated online searches for “J.J. Llewellyn, Oxford” just take me right back to the book.

Once again, I’m only speculating here. Llewellyn doesn’t actually say any of this. Here’s an excerpt:  “For some time it has been common knowledge in thaumato-linguistic circles and among others who care for such things that a chance discovery of eroded rock carving at an anonymous site had been followed by a quite remarkable production of objects, texts, and diagrams, a few associated with the original find but most created during periods of meditation on the context of the carving, using advanced techniques of hypno-activity that have been largely developed from the study of the initial products.” Now imagine 130 pages of sentences like that, and you begin to get the idea of what it’s like to dig through World of the Dark Crystal for info.

The big question is, does knowing any of this meta stuff add to our enjoyment of the movie? I guess all this was done to explain how we on Earth know the story of The Dark Crystal. Therefore it adds to immersive nature of the film, so we don’t question things like if this is some other world, how do we even know about it? Consider the Muppets: In four of the Muppet films – The Muppet Movie, The Great Muppet Caper, A Muppet Christmas Carol, and Muppet Treasure Island – there’s a meta layer to the proceedings, so that it’s not just a movie about the Muppets. Instead, the Muppets are real-world performers, and we’re watching a movie starring the Muppets. Similarly, thanks to this Llewellyn guy, the movie The Dark Crystal is not just a weird fantasy movie, but an adaptation of the “Book of Aughra” and related artifacts brought to Earth from another world.

Next: Hitting the road.

Author of CINE HIGH. amazon.com/dp/B00859NDJ8
View all posts by Mac McEntire →
This entry was posted in Dark Crystal scene-by-scene. Bookmark the permalink.