Rereading the Fantastic Four comics from the start.  This “the Thing turns evil” story has been going on for four issues now. Now it’s issue #71. How’s it going to end? 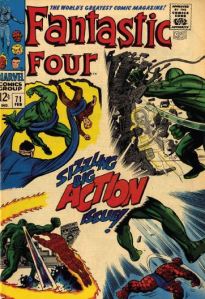 At the end of the last issue, Reed and Johnny believed Ben was killed, but this one begins with Sue freaking out thinking Reed is killed. Turns out the Mad Thinker’s monster android has smashed through the wall, knocking out everyone but her. The android fires a laser beam out of its face (!) which Sue avoids by turning invisible. She grabs a hold of Reed’s “electi-force beam” and fires it, filling the room with energy. This has a double effect of knocking the android for a loop, as well as reviving Reed and Johnny. The energy strikes Ben as well, but we don’t see the effects of it yet.

The android uses its radar sense, depicted by its face turning into a radar screen, to find Sue. Reed passes out again (thanks for that), and Ben awakes. Sue wonders if Ben is still a rage-filled monster, but he instead fights the android to save her. She takes this to mean that he’s back to his old self, and the “meta-wave” used on him last issue worked. Ben, with help from Sue’s force fields, fights the android, eventually punching him right out of the building.

Sue passes out due to the strain. Ben tries to wake her as Reed rouses. He thinks Ben’s still evil and attacking Sue, so he strikes Ben. They fight for a while, with Johnny joining in, before Sue wakes up (lots of getting knocked out and waking up again in these first few pages) to set everyone straight. All four FFers are OK and back together!

But it’s not over yet. In the street outside, the android is still alive and kicking. It has built-in rockets, and it flies up the FF’s penthouse and attacks. The bulk of the rest of the issue is everyone fighting it. It has ice powers to counterattack Johnny’s fire powers, and it punches just as hard as Ben. Reed leads the android on a chase through the lab, avoiding its goofy-looking retractable disintegrator, until the reach the Negative Zone portal. You see where this is going – Reed opens the portal and the android is sucked through, doomed to spend eternity trapped in the Negative Zone.

Crystal shows up, and it takes two pages for everyone to compare notes so we’re all up to speed. Then Reed gets super dramatic, saying that if the Negative Zone portal wasn’t there, they’d all be dead now (Reed assumes that nothing can destroy it). Because Sue is pregnant, Reed says it’s too dangerous for them to carry on. He then announces that it’s time for him and Sue to quit the team. Johnny punctuates the drama by saying, “That means… the end of the FF!”

Unstable molecule: Lots of action for Reed in this one, with him stretching his fist into a giant wrecking ball, and turning himself into a wheel so the android will chase him into the Negative Zone room.

Fade out: Instead of sitting out the fight scenes because of the pregnancy, which we’ve seen in the last several issues, Sue uses her powers to escape the android and later helps Ben defeat it.

Clobberin’ time: Ben punching the android through the wall is one of this series’ great “Heck, yeah!” moments.

Flame on: Johnny puts up a good fight, but he get frozen by the android’s ice powers real quick.

Trivia time: The monster android from this issue went on to appear sporadically, first by teaming up with Annihilus in a future FF story, and then making a brief appearance in the Annihilation crossover event.

Commercial break: Order dinosaur bones in the mail! (I really want to know what kids who sent away for this in 1968 actually received.)

Fantastic or frightful? There’s a lot of fighting and gorgeous Kirby art in this one, which is good, but the resolution of Ben’s story arc is a disappointment. Does he remember all the things he did when he was evil? Does he feel any regret for what he did? Instead, there’s one panel of “He’s all better now,” and the team is back to normal. This arc started with a lot of drama about Ben trapped in a monster’s body, and in this finale, we don’t go back to that at all. Reed’s declaration of quitting the team on the final page seems like it comes out of nowhere. A fun issue, but not what it could have been.