Re-reading the Fantastic Four comics from the start. Issue #73 is interesting, in that it continues stories started in other comics. You see that all the time these days, but it was something new back then.

The issue begins with FF (just Reed, Ben and Johnny, as Reed says Sue is out of town) searching for Daredevil, believing that Dr. Doom’s brain has taken over Daredevil’s body. This actually happened in Daredevil #38, published the same month as this issue, but what the FF don’t know is that DD defeated Doom already. The opening splash page has Reed operating a huge gun-like device, but we’re not yet told exactly what it is. Johnny flies out over the city, looking for Daredevil, only to immediately spot him running along a rooftop. Thinking Daredevil is really Dr. Doom, Johnny attacks, causing no shortage of property damage and apparently flat-out trying to kill Doom/Daredevil. Daredevil tricks Johnny into crashing into a nearby rooftop water tower, which puts out his flame and knocks him unconscious. (Do these high-rise water towers ever actually stop fires, or do they exist only to be used as props for superhero battles?)

While Daredevil frets over what to do, there’s Spider-Man on the roof with him. Spidey doesn’t come swinging in or anything, he’s just standing there all of a sudden. Daredevil says the FF thinks he’s Doom, and Spider-Man promises to help. Spidey swings over to another rooftop, where he saw someone else who can help. It’s Thor, who’s not feeling well. Now this issue isn’t just part two of Daredevil #38, it’s also part two of Journey Into Mystery #150, in which Thor (sort-of) lost his godlike powers, and got smacked around by the Wrecker. Spider-Man says the FF and Daredevil need his help, but Thor is more interested in going after the Wrecker again. Spidey calls Thor a coward, so Thor goes along with him, to prove his worth. (Never call Thor a chicken!)

Daredevil arrives at the Baxter Building, hoping to open a dialogue, but Reed and Ben aren’t here to talk. They both attack on the spot. There’s a line of dialogue about Ben being struck by Reed’s “nerve ray,” even though we don’t see this happen. This weakens Ben’s awesome strength, allowing him to be knocked off his feet by a kick from Daredevil. After more fighting, Daredevil kicks Ben into Reed’s “Demolo-gun,” the one from the beginning, and destroys it. 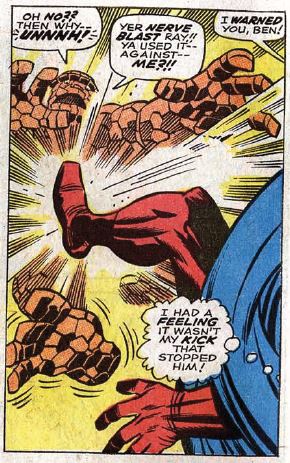 Elsewhere, Spider-Man and Thor make their way toward the Baxter Building, with Thor explaining that without his powers, he can no longer fly. Johnny wakes up and sees Spidey and Thor. He assumes out of nowhere that they are lifelike robots created by Doom, so he attacks. Spidey leads Johnny away and Thor reaches Daredevil, Reed and Ben. Reed and Ben also blindly assume Thor is a robot lookalike, and… more fighting! So, Thor has no powers, and Ben has been weakened by a nerve ray, and that evens things out? It doesn’t matter, because this fight is the whole reason why you want to read this comic. Ben and Thor go at it, pounding away at each other, including an eye-popping splash panel in which Ben says his “Clobberin’ time” catch phrase while taking a blow to the chest from Thor’s hammer. 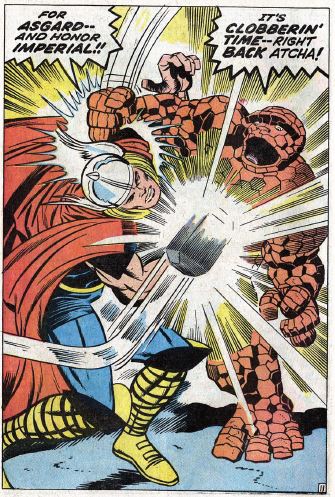 There’s a brief interlude with Spider-Man and Johnny, where Spidey uses fumes from a chimney to knock out Johnny. Then, it’s back to the main story, where Reed and Daredevil fall through a hole in the ceiling down into Reed’s lab. Reed totally does not want to listen to reason, even insisting that Daredevil’s heightened senses could only mean he’s a robot. Ben and Thor continue to fight, with Thor calling upon his father Odin for help, which I guess gives him a burst of strength? It’s not really explained, but it lets Thor wail on Ben for a few pages. Ben doesn’t give up, though, and fights back. That is, until he hits something else, but we don’t see what. 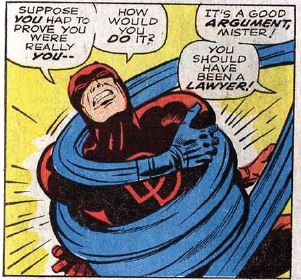 In the lab, Reed continues to attack Daredevil, while Daredevil argues about how to prove himself to Reed. “You should have been a lawyer!” Reed says, amusingly. Reed tries to punch Daredevil, but something invisible stops his hand. It’s Sue, who says she just saw Dr. Doom on the 6 p.m. news, addressing his ministers in Latveria. (Somehow, no one questions whether TV Doom was a robot. Also, I thought Reed said Sue was out of town.)  Reed and Daredevil shake hands, and apparently Johnny and Spider-Man are friends again, because they just appear back in the lab. Thor, however, has gone and run off, already back to his pursuit of the Wrecker. Ben suggests going after the real Doom, but Reed says they can’t attack Latveria, because it’s a sovereign nation. With that, the story just ends.

Unstable molecule: Reed and Daredevil are pretty evenly matched, with his powers nicely balancing out DD’s super senses. It goes to show that for being the brains of the group, Reed really knows how to fight.

Fade out: Sue is barely in this issue, but she manages to save the day just by being there.

Clobberin’ time: The awesomeness of the Ben/Thor fight is diluted somewhat by them both being depowered.

Flame on: I thought Johnny had evolved beyond his fire so easily put out in every fight, but that happens twice in this issue. Guess he’s having an “off” day. On the plus side, he displays another new use of his power, converting his heat into non-lethal “stun blasts.” 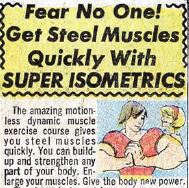 Trivia time: Spider-Man says even Moishe Dayan would have second thoughts about starting a fight with the FF. Moishe Dayan was an Israeli military leader and politician who was an instrumental figure in the Six Days War in 1967. Lookit comics get all topical!

Speaking of Spidey, during this time in his own comic, it was the multi-issue story where he had amnesia, and was wanted by police because they thought he was working with Dr. Octopus. I guess we’ll have to tell ourselves that his FF appearance happens either before or after the amnesia.

Fantastic or frightful? Is it out of character for our heroes to be all punch-first-and-ask-questions later? Remember that the last time they saw Dr. Doom, he was roided up with cosmic energy and about to lay waste to all the Earth, so I can see why they’d want to take Doom out before he makes his move. Also, Doom doesn’t appear in this issue, but his mere influence is so great that all this trouble happens without even doing anything. That’s awesome. Really, though, it’s just an excuse to get a bunch of Marvel heroes in one book, and maybe boost sales for Daredevil and Thor.

Next week: He’s back. That’s all you need to know.