Re-reading the Fantastic Four comics from the start. Last issue, we learned Galactus is returning to Earth. Now, in issue #75, we learn his plans are a little more complex than just “eat the planet.”

First, I have to say I love the blurb on the cover: “What protiteth a man to flee his fate? For surely he will find… worlds within worlds!” It almost looks like Galactus is looking down at the blurb thinking, “‘Profiteth?’” Anyway, the story begins with Reed, Johnny, and Ben on an island just outside of New York City (where this is, exactly, is not specified) while pregnant Sue is at home being cared for by Crystal. Reed says they’re on an island not to endanger lives when Galactus makes his big appearance. From the island, they can see a “space ray” being fired on NYC, which Reed deduces is Galactus still searching for the Silver Surfer.

Out in space, Galactus speechifies to himself that his hunger has grown so much that he needs to find the Silver Surfer so the Surfer can find him a new planet to eat. (OK, he doesn’t “eat” planets so much as he absorbs all their energy and whatnot.) It’s never explained why he can’t just find his own planets to devour. On some viewscreen-type thing, Galactus sees the FF, remembers that they befriended the Surfer, and says they must be compelled to betray the Surfer. He then says he will attack the FF with, “the power of transcendent thought.”

On Earth, the island starts tossing and turning, uprooting itself and endangering our heroes. This is basically a fight scene between FF and… nature. First they punch the trees and rocks, and then Reed and Ben get sucked down into the ocean while Johnny flies above. Next, the ocean spits out Reed and Ben, and all three heroes are drawn upward into the sky by some unseen force. In the upper atmosphere, there’s almost no oxygen and freezing temperatures (it’s almost like real science!) Finally, there’s a “noiseless explosion” and the FF are back on the island, as if nothing happened. 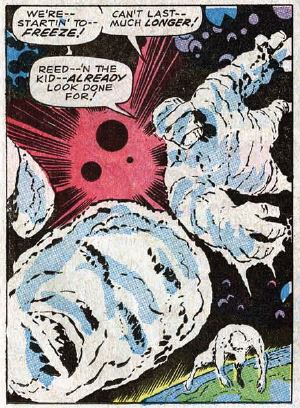 Our heroes take a moment to be befuddled by this, and then three figures emerge from the water. They’re exact duplicates of Reed, Ben, and Johnny. Oohh, yeah, evil twins! Everyone of course attacks each other’s counterpart, and Johnny is surprised to learn Evil Johnny is more powerful than he is.

From there, we catch up with what the Silver Surfer is up to. You might remember (or not) that in the last issue, Johnny left the weakened Surfer behind at the Baxter Building, and later offhandedly remarked that the Surfer had disappeared. We now see that he’s disappeared to the Microverse. He explains (sort of) that the Power Cosmic allows him to shrink down to microscopic size, and that he’s hiding out inside a drop of chemical fluid on a microscope slide in Reed’s lab. He’s all excited to be in the microverse, finding suns and planets way down there.

Back on the island, fighting! It’s a couple of pages of the FF duking it out with their doppelgangers. Ben holds his own (heh) because Evil Ben has his strength but not his fighting know-how. Reed has a tougher time, because Evil Reed keeps going in for the kill, and Reed fears he’ll have no choice but to outright kill the evil him. Johnny’s the one who comes up with the classic “switcheroo” tactic, by not fighting their counterparts, but their partners’ counterparts. So Reed fights Evil Johnny, Johnny fights Evil Ben, and Ben fights Evil Reed (got that?). It’s over quick, as the evil FF is defeated after being simply thrown into the water.

No rest for our heroes, though, as a vision of Galactus appears before them in a “mental astro-image.” He demands that the FF give him the Silver Surfer, but Ben bluntly refuses before Reed can say anything. Galactus chides them for defying his greatness and he disappears, warning them there will be consequences. Reed and Ben argue, with Reed saying they should have negotiated, and Ben saying he was right to stand up to the big G.

Johnny then points out a giant meteor in the sky. Reed corrects him and says it’s not a meteor, but a planetoid, which is worse somehow. In New York, we catch up with Sue and Crystal, who are staying in a luxury hotel room, as opposed to the nondescript apartment they were at in the last issue. Sue hears commotion outside, but Crystal lies to her and says it’s another protest (this is 1968, remember). Crystal is lying to Sue to “protect” her, again. Sue has herself a pity party, saying that once the baby is born, she doesn’t want it in danger, ever.

The planetoid is falling toward New York, and Reed says it will “atomize” the city once it hits. Here’s where things get a little wonky. Reed closes his eyes and concentrates, saying that thoughts have “unlimited range,” and that if Galactus can transmit into their minds, than Reed can send a thought back to Galactus. It actually works, because Reed’s genius-brain is just that awesome. He tells Galactus that the FF will find the Silver Surfer for him. Galactus agrees to this, removing the planetoid. He even teleports the FF back to Reed’s lab (that was nice of him). There, Reed deduces that the Surfer has discovered his latest experiment. He opens a door and reveals a submarine-like craft and says the FF must follow the Surfer on “one of the most dangerous journeys of all time!”

Unstable molecule: So Reed basically discovers/invents mental telepathy in this issue? You’d think there would be huge world-changing repercussions to this

Fade out: Sue sits out the action again. I’m afraid it’s going to be a long, long time until we get to John Byrne’s “Sue is the team’s most powerful member” stuff.

Clobberin’ time: Ben has shown nothing but dislike for the Silver Surfer, and yet he’s willing to endanger all of NYC by not handing the Surfer over to Galactus. I guess in his eyes, Galactus is the greater of the two evils.

Flame on: Johnny is pretty heroic in this issue. He’s the key to stopping the FF’s duplicates, and later he suggests using his nova flame against the planetoid, at the risk of his own life.

Trivia time: At one point, Ben asks Reed if Reed has “halavah on the brain.” I looked it up: Halavah is an Eastern Mediterranean sweetmeat made of honey, sesame seeds, nuts, rosewater, and saffron. How is this a part of Ben’s diet? We’ll never know.

Fantastic or frightful? This one has a lot of action and I like the Ben/Reed disagreement on whether to negotiate. The big problem with this issue is how out-of-character Galactus is acting. He’s gone from being this godlike entity viewing humans like gnats beneath his feet, to coming up with crazy schemes like cloning our heroes. He’s acting more like a generic mad scientist villain instead of an all-powerful, world-ending threat, and that’s a slight disappointment.

Next week: Micronauts! (No, really)