Rewatching 21 Jump Street! Season three begins, Booker joins the cast, and it is ON.

Here’s what happens: At the end of the last season, our heroes went their separate ways, not knowing whether Jump Street would reopen. We begin after this has been resolved, with Jump Street back in business. Only, Hanson has a new partner, the rebellious chip-on-his-shoulder Dennis Booker (Richard Grieco).

“I have the same makeup guy as Richard Alpert from Lost.”

Here’s Hanson: This one’s all about Hanson and Booker butting heads. Hanson describes Booker as a “sociopath,” and he investigates Booker behind everyone’s backs.

Penhall’s prerogatives: Penhall has left Jump Street in favor of working with police intelligence. Hanson asks him to check out Booker’s background. He mentions he’s still living with girlfriend Dorothy.

Book ‘em: Our introduction to Booker is him in shop class, building a homemade electric chair (way to give kids ideas, show). He’s a force of nature in this one, stirring up trouble everywhere he goes. Then, there’s a huge twist: He’s really with internal affairs, secretly investigating Jump Street. He stays with Jump Street at the end, though.

Undercover blues: The case of the week has to do with a school afflicted with racially-attacking graffiti, ultimately leading to a black girl being attacked. Everyone suspects the school bullies, but Booker believes they’re not racists, just ordinary bullies. Hanson, then, worries that Booker’s loyalties are with the bad kids, and not the cops. 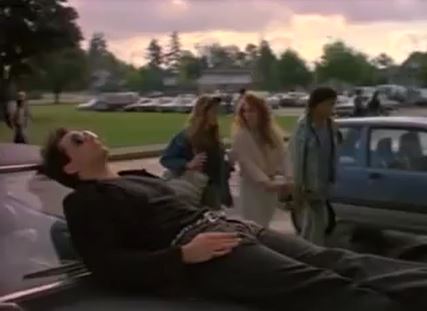 Goin’ to the chapel: Hoffs debuts her shorter, edgier hairstyle, while Ioki shows up with a rockin’ ponytail. Hoffs says she burned her “Officer Milk Carton” costume, a scene I wish we could have seen. Blowfish, Jump Street’s janitor, also returns, with a go-nowhere joke about him repainting the chapel’s back alley. (Is this a reference to something?)

Torn from today’s headlines: The racism plotline is really extreme and in-your-face, with racial slurs galore and violence against minorities. Now that the show was a hit, the creators push the envelope big-time, saying to viewers, “We can get away with anything now.”

Trivia time: At one point, Hanson compares Booker to Morton Downey. I believe he means Morton Downey Jr., a controversial talk show from the ‘80s who encouraged outrageous shouting matches on the air for the sake of sensationalism – a forerunner to the likes of Jerry Springer. Morton Downey Sr. was a singer popular for his “Irish tenor” style, which is considerably less Booker-like.

Battle of the big hair.

Jumpin’ or not: This was the height of the show’s popularity, and it’s easy to see why. Everyone steps up their game. The big question is, why was Booker introduced? Stories vary. Because Johnny Depp was getting more and more movie offers, some say Booker was a possible replacement, or a contract negotiation thing, with producers saying to Depp, “You can be replaced at any time.” Either way, he’s a great addition. Booker is troubled, and filled with rage. Hanson, after two years of learning to be the bad boy, is now confronted with a real bad boy. To confront Booker, Hanson must unleash his own inner rage. Great stuff. It’s jumpin’!