Rereading the Fantastic Four comics from the start. Issue #80 brings back an old friend and introduces a new villain.

We begin with some comedy shtick as Johnny, Crystal, and Ben are hanging out at the Baxter Building. Johnny and Crystal are doing chores (!) while Ben sits around reading. The FF have received a letter from their old pal Wyatt Wingfoot. The last time we saw Wyatt was at a Metro College football game back in issue #61. Now, he’s out on summer vacation, visiting his family on the Indian reservation. It’s not all fun times, because the letter mentions evil spirits and a living totem. Reed shows up and says Sue has asked him to stop “haunting” the hospital, so the three guys are going on vacation out west, to visit Wyatt.

In a desert region (we’re not told specifically where) we rejoin Wyatt, driving around in the Geo-Cruiser the Black Panther gave him back in issue #54. He wanders into what appears to be an earthquake, throwing him around for a few pages, before he confronts a giant inhuman creature, Toomazooma, the living totem. Tooma (as I like to call him) introduces himself as the “totem who walks” and says “My sleep of ages has ended! Those who created me must die!”

The FF arrive in the desert, flying overhead in their pogo plane. Johnny takes off, flying under his own fire power, only to be fired on by Native Americans, armed with high-tech guns. The wizened elder, Silent Fox (who is quite chatty) believes Johnny is a demon sent by Tooma to kill them all. Johnny scares everyone off except Silver Fox, who stands his ground. Reed lands the plane with my favorite ‘60s sci-fi cliché, with the plane pointing straight up, and he and Ben reunite with Johnny. Johnny explains that Silver Fox is Wyatt’s grandfather, and Wyatt has run off in search of Toomazooma. Reed has heard of Tooma (we don’t know how) which he describes as, “the most fearful legend of all!”

Toomazooma chases Wyatt around, showing super strength, and the ability to breath fire and produce sleeping gas. The gas knocks Wyatt out. Back with our heroes, Silver Fox provides some exposition. Let’s see if I keep all this straight. The tribe has high-tech weapons because there’s oil on the land, making them all rich. The Red Star oil company, which is secretly controlled by the soviets (!) keeps trying to force them off the land, so Toomazooma was created to protect the land. 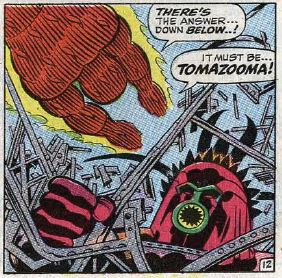 There’s an explosion in the distance, and our heroes run off to investigate. The oil fields are on fire, and Tooma is smashing them up real good, Godzilla-style. He fires a “shock blast” out of his eyes, knocking Johnny unconscious. Ben jumps onto Toomy’s back, and he too gets knocked out by the big guy’s power blasts. Reed fires the plane’s weapons at Toomy, but that’s useless, and the totem makes the plane crash.

Wyatt recovers and reunites with Silent Fox. Wyatt insists that this is not the living totem of legend, but a machine built by the tribe’s enemies. What happens next is confusing: Silent Fox uses a cell phone-like “transceiver” to contact the Pentagon, only to tell them that the tribe doesn’t want the Pentagon’s help, and that the tribe can handle the crisis themselves. Reed, Ben and Johnny also recover, and fight Tooma at the local dam, trying to keep the monster from destroying it. Reed agrees that Tooma is not an ancient spirit, but a robot built to take control of the oil-rich land.

After the FF fight Tooma for a while, the tribesmen show up. They’re driving futuristic cars and wielding laser guns, all while dressed in feathered headdresses and cowboy hats. So, is this offensive or kickass? It’s kind of both. They fight with gusto, but their weapons can’t penetrate Tooma’s surface.

Reed gets a great idea. He compresses his form into a small ball, and Wyatt loads him into a bazooka. Reed instructs Wyatt to aim for the opening right under Tooma’s eyes (his mouth?). It works. Inside Tooma’s body (ew) Reed manages to short circuit him, which of course causes the big robot to blow up. Reed’s not harmed, though, thanks to his pliable frame. The story ends back on a mystical note, in which a mysterious figure is seen in the clouds. It’s the real Toomazooma, ready to protect the land if the humans fail. Again, there’s no “the end” or “coming next month” caption, it just ends.

Unstable molecule: This is a rare mention of Reed’s mass. Normally, he stretches all over the place without any thought to his weight, but here, when he shrinks down to smaller size, it increases his weight as he compresses. Normally, this type of thing goes unmentioned.

Fade out: Sue doesn’t appear in this issue, but this issue was out the same month as FF annual #6, where she has a more prominent role.

Clobberin’ time: Ben’s in a jovial, playful mood throughout the whole issue, which is strange considering all the drama that went down in the last one. Ben at one point quotes lyrics from the song “Waltz Me Around Again Willy,” which was a hit back in 1906 (!) from singer Billy Murray – not to be confused with the Ghostbuster Bill Murray.

Flame on: Because they’re out west, Johnny decides to play along by wrapping up Toomazooma in a flame lasso. Don’t know how that’s supposed to work, but it’s a nifty visual.

Trivia time: Silver Surfer #4 revealed that Loki present during this story, watching the FF fight Toomazooma, as he was considered making the Thing a pawn in his fight against Thor. Loki went with the Surfer instead.

Not surprisingly, Toomazooma did not go on to become a Marvel icon. The robot Tooma is referenced in Marvel Two-In-One #19, where it’s revealed he was powered by Null Bands, which later ended up in the hands (paws?) of the villain Cougar. In the Heroes Reborn alternate reality, Wyatt Wingfoot piloted a Toomazooma robot, anime mech style. Another alternate universe story had a throwaway gag about a Toomazooma monster movie flopping at the box office. Finally, the internet informs me that Toomazooma shows up in Marvel’s current big crossover du jour Original Sin. Seriously?

Commercial break: Do I dare suggest that this ad might have been a ripoff:

Fantastic or frightful? Everybody likes to shake their hands at this issue, chiding it for its portrayal of Native American stereotypes. It’s not that awful, all things considered. A lot of Stan Lee stories deal with seemingly old societies secretly having high-tech wizardry at their disposal. We saw it with Latveria, Wakanda, and now with Wyatt’s people. The image of guys with Old West outfits wielding laser weapons is the type of incongruous imagery Jack Kirby would later go nuts with in The Forever People for DC. So, this issue is “off” in a lot of ways, but it’s also Stan and Jack doing what they do best.

Next: She’s having a baby!