What’s goin’ down: Meet the Street Rangers, a neighborhood watch program in which a bunch of beret-wearing thugs patrol the streets, looking for crime. Sounds nice, but these guys are getting aggressive and violent. Their vigilantism is impeding police investigations and stirring up fights, so our heroes go undercover to watch the neighborhood watch.

Here’s Hanson: Hanson’s undercover as a drug dealer, trying to nab the same crooks that the Street Rangers are after. We know he’s undercover because he’s wearing a goofy hat.

Penhall’s prerogatives: Penhall’s still working for police intelligence, where he knows everything about everything. While he delivers convenient exposition, Captain Fuller pressures him into deciding whether he wants to come back to Jump Street or not.

Book ‘em: The scumbag druggies don’t trust Booker as much as they do Hanson. This forces Booker to watch the action from the sidelines, much to his frustration.

Undercover blues: This episode’s all about Ioki, moving up through the ranks among the vigilantes. There’s a lot of action, which gives actor Dustin Nguyen several chances to show off his cool martial arts moves. 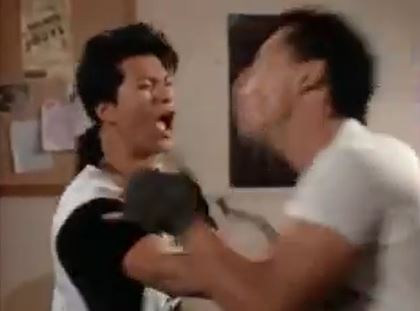 Torn from today’s headlines: Neighborhood watch programs have been around since at least the 1960s, if not earlier. The concept was popularized in the ‘80s thanks to the National Neighborhood Watch Institute, as the distinctive “Boris the Burglar” logo started popping up everywhere.

“Remember when the shuttle crashed and I sang that song to those little kids? How lame was that?”

Jumpin’ or not? The show was a bona fide hit by this point, so they could afford some serious production value. As such, most of this episode is filmed outdoors and at night, with glitzy lighting and that thing where the streets and sidewalks are watered down to make them look all shiny. There’s a lot of action, chases, and fighting in a three-way war between cops, crooks, and vigilantes. Fun stuff overall. Jumpin’!